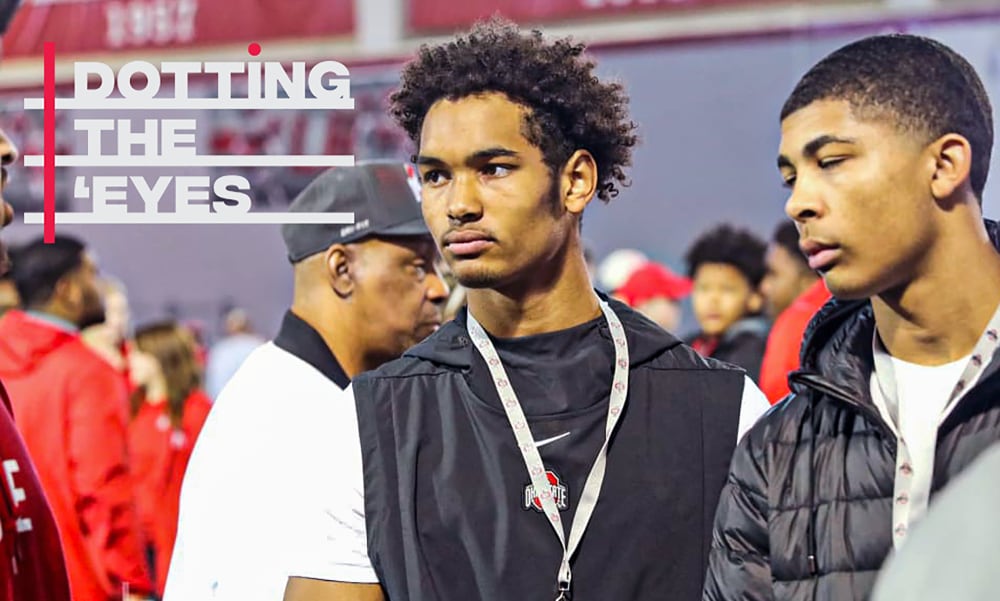 Emeka Egbuka will return to Ohio State for the Buckeyes key matchup with Wisconsin. (Birm/Lettermen Row)

Stay in touch or be left out because Ohio State recruiting is a 24-hour, seven-day-per-week obsession. What’s the latest news as the Buckeyes build for the future? Get that and more Sunday through Thursday on Lettermen Row. The midweek notebook has the latest on a pair of top junior prospects who are planning to return to Ohio State soon.

The Buckeyes will host their top 2021 receiver target for the second time this year when Steilacoom (Wash.) standout Emeka Egbuka returns to Columbus next week.

“I’ll be there for the Wisconsin game,” Egbuka told Lettermen Row on Tuesday. “I’m not sure exactly when I’ll get there yet, though.”

Egbuka, the nation’s top-ranked athlete in the class of 2021, has the potential to play cornerback or wide receiver in college. But he’s been a major target for wide receivers coach Brian Hartline and the Ohio State offensive staff for much of the last year — and remains a priority at that spot.

The Buckeyes are one of the schools expected to be among the finalists for the 6-foot-1, 190-pound Egbuka who just released his top 10 schools on Twitter.

Ohio State, Clemson, Alabama, LSU, Stanford and more than 25 other schools have made Egbuka a top choice on the recruiting trail. Now the Buckeyes will get another chance to impress the 6-foot-1, 190-pound junior next week.

Another of the top 2021 prospects for Ohio State has told Lettermen Row that he intends to return to campus this season after previously being less-than-optimistic that would be able to happen.

“We will be up,” Pryor told Lettermen Row. “It will be either the Maryland game or the Penn State game. Whichever of those games starts later, that’s the one we’ll be up for.

There is only one current crystal ball prediction for the country’s fifth-ranked junior running back, and it’s for the Georgia Bulldogs, who hosted Pryor for a visit during their big game against Notre Dame in mid-September. Still, as the 5-foot-1o, 190-pound back told Lettermen Row in September, the relationship with Ohio State running backs coach Tony Alford is very strong.

“Our relationship is better than most,” Pryor said prior to that Georgia visit. “I don’t really know why. We just had a great vibe when we first met. We talk frequently, and we’re trying to figure out a great time to get back up there.”

It looks like that time has been figured out.

Ohio State was one of the stops that George Rooks, a talented junior defensive lineman from St. Peter’s Prep (Jersey City, N.J.), made this summer. And he’s stayed in steady contact with the Buckeyes and defensive line coach Larry Johnson since.

“I hear from Ohio State a lot,” the 6-foot-5, 260-pound Rooks told Lettermen Row. “Whether it’s by mail or text message. It’s all about how they would make me the best version of myself.

“The relationship is good right now with Larry Johnson. Hopefully we can get even more connected after the season when I have more time.”

Rooks is a teammate of Ohio State commitment Cody Simon, and right now St. Peter’s remains undefeated and is in contention for a state title. Like many New Jersey high schools, most of their games are played on Saturday afternoons, and that has kept him from making any college visits this season. It has not stopped the country’s No. 15-ranked defensive tackle prospect, and New Jersey’s third-ranked junior, from getting a lot of attention from big-time schools though.

“I hear a lot from Miami, Penn State, Syracuse and Virginia — as well as others,” he said. “With our schedule, I’ve not been able to make visits, but I am hoping to do that stuff soon after the year.”

The wheel of fortune for Ohio State recruiting

One of the wonders of the internet is that it allows fans to see a little peek behind the curtain of recruiting every once in a while, and a tweet that made its way onto the internet earlier this week did show just that.

The message, sent by Ohio State to the country’s top-ranked junior cornerback Tony Grimes, reveals a little insight into the multi-pronged approach being taken by the program when it comes to the cream of the crop across the country.

Every school in America is hoping to give a comprehensive view of what it can offer to the top football prospects from coast-to-coast, and none have done a better job presenting that than Ohio State has.