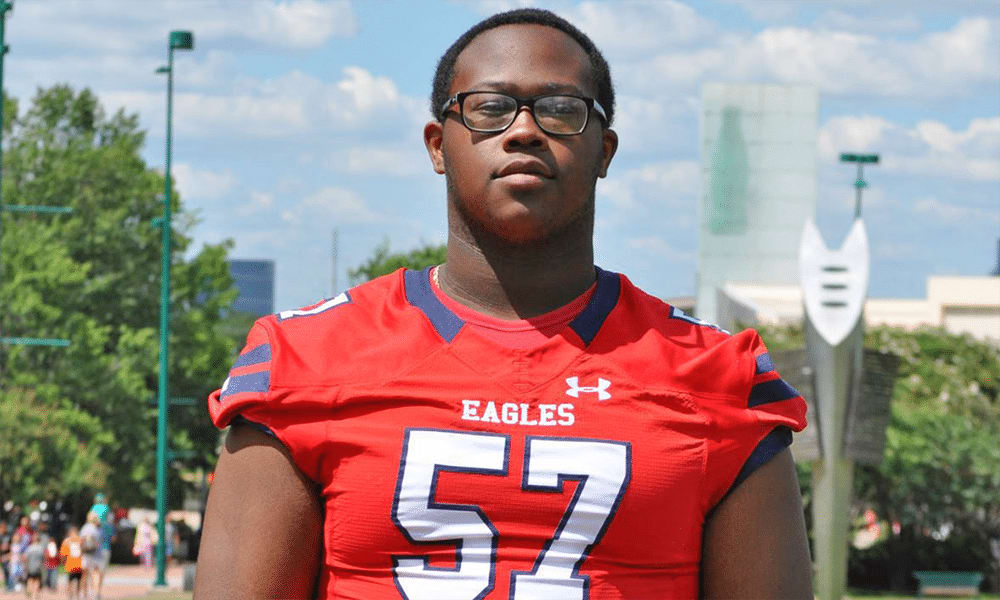 Ohio State has three big-time offensive linemen already committed in its Class of 2020, but the coaching staff isn’t done at the position. It’s very likely, in fact, that two to three more players join the mix. If commit Jake Wray has his way, one of them would be Paul Tchio, a 4-star guard from Alpharetta (Ga.) Milton High School. Wray has mentioned Tchio as one of the players that he’s recruiting the hardest. Right now, only Wray seems to be actively recruiting the 6-foot-5, 325-pound lineman.

“Jake is showing me a lot of love,” Tchio told Lettermen Row. “But I’ve only talked [Ohio State assistant Kevin] Wilson so far from the staff.”

The Buckeyes are likely waiting on a visit from Tchio before they go all in recruiting him, as they are known to do from time-to-time. It’s best to know that a player has legitimate interest before spending valuable resources chasing a commitment. That visit to Columbus could come at the end of July, but the nation’s 119th-ranked prospect says that he’s not entirely sure of it.

The new recruiting dead period isn’t helping his visit plans. Georgia has a unique football “acclimation period” at the start of every season that he has to contend with. He’s required  to use five acclimation days in July before he can put on pads in August, so that doesn’t necessarily line up with the goal of traveling north the last week of July. So, until a visit happens, it’s just about learning what he can about Ohio State.

The first thing that he’s picking up? Something good must be happening with the Buckeyes because the early 2020 returns say it must be so.

“Them having three offensive linemen already committed, it draws my attention towards them even more,” he said. “There must be a reason why they have three committed this early. So they’re definitely doing something great.”

So, the depth chart isn’t an issue in Columbus for Tchio. What does matter? What will make a school the right choice?

“The relationship with offensive line coach,” he said. “Early playing time. Could I still see myself at the school without football?”

A decision on whether or not he’ll make the visit to Ohio State could come next week. He hopes to make his college decision by the end of his upcoming junior season.

Breaking down the D’Von Ellies situation

So Owings Mills (Md.) McDonogh 2019 defensive tackle D’Von Ellies released his top schools list, about a week after posting online that an “announcement” was coming. The Buckeyes did make the cut, as expected.

Let’s cut to the chase here: Ellies wants to be at Ohio State, and I’m not optimistic that is going to happen right now. That’s a good reason for him to hold off on making an announcement, and that’s why to this point there’s been no commitment. I expect that some time in August, he’ll make his college choice and these extra few weeks will be pivotal for Ohio State as it tries to see exactly how it can fit the country’s No. 27-ranked defensive tackle into the mix.

Two days ago, I mentioned that there’s a chance for an end of July decision from Missouri’s Etinosa Reuben, and I think that decision could play a role in determining what goes down with Ellies. I believe that right now there are a couple of players ahead of Ellies on the Ohio State short list and that Reuben — with his huge upside — is one of them. If he decides for Clemson or Wisconsin instead of the Buckeyes, it’s likely to me that Ellies would move up a rung.

Now, here’s the catch: I think it’s a toss-up for the other two primary guys on the board here. Faatui Tuitele and Tyler Davis are both more polished products and more play-now guys, but they’re also much less likely to decide for Ohio State in any coming time period. I think it’s a good idea for Ohio State to lock up one defensive tackle, like Reuben or Ellies, then play the long game with Tuitele or Davis.

We’re still talking about 2020 offensive linemen, so don’t get exhausted by it yet, OK?

Remember Texas’ Chad Lindberg? He’s a 6-foot-6, 306-pound lineman from League City (Texas) Clear Creek, and he was offered by the Buckeyes back in early June.

“Ohio State is an option I’m excited to have,” Lindberg told Lettermen Row back then. “I will do more in-depth research on the Buckeyes in the upcoming month to familiarize myself with them more. But being the type of player I am, I do think I could fit in there and make an impact.”

The last month has given him a chance to do that a little, but with Sept. 1 coming and the inevitable onslaught of recruiting communication and discussion, he’s trying to take things slow.

Though he’s laying low, there has still been time for relationship building with the Ohio State coaching staff. He is one of the few players I’ve spoken to in the Class of 2020 that has to this point not been contacted by the Ohio State commits.

“We’ve talked a few times,” he said. “The relationship will get there. They say how they are building something big and I can be a part of it.”

To do that, the country’s 15th-ranked offensive tackle prospect will have to get himself to Ohio and visit Columbus. He knew that wasn’t going to happen this summer, but he’s hoping to get to see the Buckeyes home stadium during a game weekend.