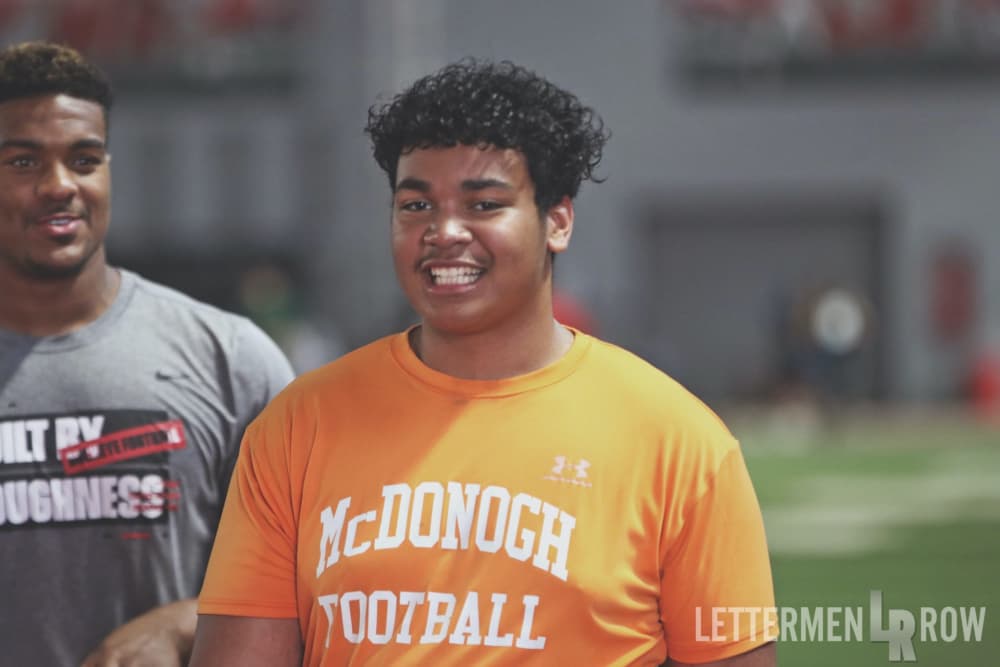 Ohio State will now have to wait for a decision from D'Von Ellies. (Birm/Lettermen Row)

What’s the announcement from D’Von Ellies?

Ohio State is not going to get a commitment from Owings Mills (Md.) McDonogh defensive tackle D’Von Ellies after all.

At least not this weekend.

The country’s No. 27 overall defensive tackle had dropped a hint on Twitter two days ago that something was coming. And though there was some debate about it being a commitment, it appears that will not be the case.

Instead, the kid who checks in at 6-foot-2, 296-pounds according to high school coach Hakeem Sule, will take a little bit more time to ruminate on his choice. My 247Sports.com crystal ball for Ellies is on Ohio State, but this delay does throw a little wrinkle into that prediction.

I feel extremely confident in stating that Ellies wants to end his recruitment and pick the Buckeyes. Right now, the question in my mind is if he’ll get that chance. I’m still leaning toward yes, but this delay is reason to feel a little doubt.

Ohio State has no defensive tackles committed yet for 2019, and it seems the Buckeyes will take two players at the position. Ellies is one of a handful of options still being considered, along with 5-star Faatui Tuitele, 4-star Tyler Davis and fellow 3-star prospects Jared Harrison-Hunte and Etinosa Reuben. New names are always popping up as well, as is the nature of this recruiting beast we’re constantly feeding.

The Buckeyes recently hosted the best 2021 prospect in Colorado when Boulder’s Brayden Wood made his way to Columbus for a June one-day camp. At the end of July, they’ll welcome in one of that state’s top 2020 prospects as well.

3-star defensive tackle Aidan Keanaaina will make a stop at Ohio State with his mother. He’s an Oregon, Ohio, native who will make this trip as the last leg of a two-stop trip.

“We are going to Notre Dame first,” the 6-foot-3, 292-pound Keanaaina told Lettermen Row. “Then we’ll visit Ohio State and then head home.”

This will be the first visit to Ohio State for the country’s 23rd-ranked 2020 defensive tackle. He was offered by the Buckeyes in May but has some family ties to the Ohio State program outside of his Northwest Ohio roots.

“Freshmen year I met the Ohio State running backs coach, [Tony] Alford,” he said. “He knew my dad, he remembered the last name from my dad, Stacey. He was a tight end and played with Alford at Colorado State. [Urban] Meyer wast the wide receivers coach at the time. [Alford] said he would come back again.”

Alford did that, and he brought along Larry Johnson ,who offered Keanaaina. Now three months later, he’s set to make a pivotal visit to Ohio State.

“This trip is important because I am getting a feel for the school,” he said. “[It’s important] to see the energy in the football program. How is the campus and student life? What are the coaches like with how they engage with the players?”

Ohio State has five current commitments in the Class of 2020.

Could Buckeyes be the ‘Wan’ for Robinson?

Ohio State has made another top-schools list for a player that I just don’t think they’re very likely to land at this time.

Though he’s listed as an all-purpose running back on his 247Sports.com profile, Robinson is being recruited by Ohio State as inside wide receiver and return weapon. That’s one of the primary reasons why I think as of today, he’s not a top priority for the Buckeyes — and vice versa.

He’s a dynamic athlete and a really explosive offensive weapon with the football in his hands. But if I was ranking this group on my own, I’d say that Ohio State was in the lower half of the schools listed when it came to the probability of eventually getting a commitment from Robinson.

Go check out The Swaggernaut

Hey, we’re still in the recruiting dead period, OK? That means things are a little light around here.

If you’re in Columbus this weekend and want a chance to see Ohio State director of player personnel Mark Pantoni turn himself from Swaggernaut to Country Bumpkin, then run to Flannagan’s in Dublin on Saturday night.

A fun event on Saturday @FlannagansDub for a great cause @BuckeyeCruise!

I will be performing at 9:30 pm and promise to give you your money’s worth! 🤠

For those unaware, Pantoni is a pretty big country music fan. Now, it seems, he’s trying his hand at performing. He’ll be on stage in the 9:30 p.m. to 10:00 p.m. window, and it will certainly be worth your time if you’re an Ohio State fan looking for a fun way to spend your Saturday night.

If Ohio States unthinkably loses Zach Harrison, where does it turn?
If Ohio State lands top wideout targets, where will it turn for one more?
Advertisement