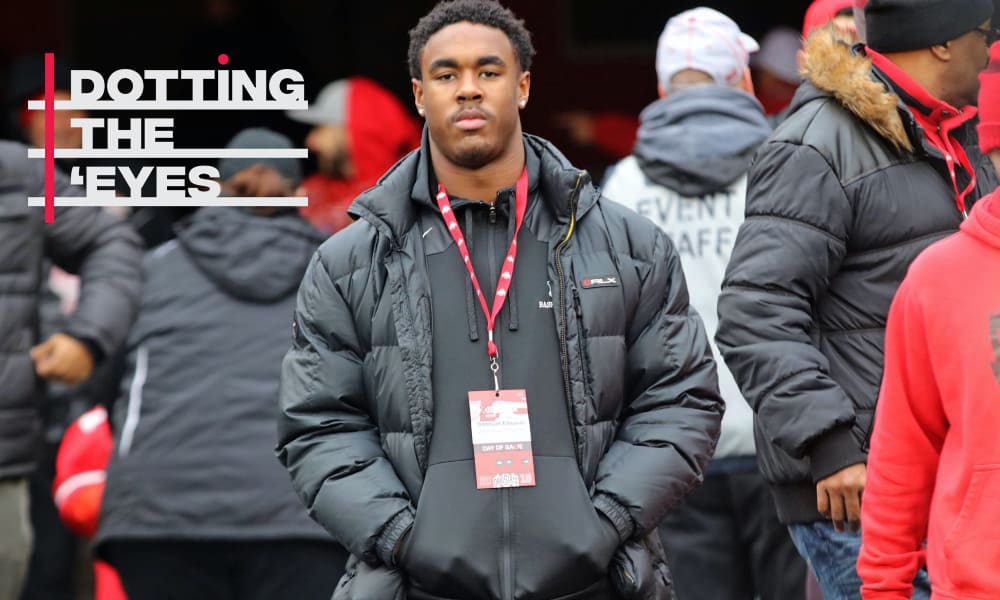 Ohio State was once considered the favorite for Donovan Edwards, and he's heading back to Columbus. (BIrm/Lettermen Row)

Stay in touch or be left out because Ohio State recruiting is a 24-hour, seven-day-per-week obsession. What’s the latest news as the Buckeyes build for the future? Get that and more Sunday through Thursday on Lettermen Row. Wednesday’s notebook updates a few of the key visitors making their way to Ohio State for the Buckeyes big game against No. 25 Michigan State.

It wasn’t all that long ago that the Buckeyes were considered the team to beat for the country’s fourth-ranked 2021 tailback, West Bloomfield (Mich.) 4-star Donovan Edwards.

This weekend, for the first time since the spring, Edwards will visit Ohio State and get a good look at the offense under Justin Fields, an attack that is bit more balanced than last year’s iteration with Dwayne Haskins. Will that approach help tilt Edward’s recruitment back in favor of the Buckeyes?

That’s a key question for the coaching staff and one of the reasons why it is so pivotal for the Buckeyes that commitments like Kyle McCord and Jack Sawyer will be on hand to help convince the 5-foot-11, 195-pound running back that his best future is in Columbus — and not Ann Arbor.

Michigan’s influence is obvious in this recruitment. Edwards grew up around a ton of folks who support the Ohio State rivals, and with former Wolverines wide receiver Ron Bellamy as his coach for the Lakers, the push to stay home is greater than ever in that region. There are already a pair of West Bloomfield stars, 2020 talents Makari Paige and Cornell Wheeler, committed to Michigan.

For Ohio State, this is a good chance for running backs coach Tony Alford to re-establish his relationship with Edwards, who has been a top target in the Class of 2021 for more than a year already.

We’ve talked about it for about a week now, but after dropping hints of his own on Twitter on Monday evening, sources close to Ohio State’s recruitment of C.J. Stroud have indicated that the program is expecting the 4-star quarterback to make his first visit to Columbus this weekend for the Michigan State game.

Stroud’s visit is important for a number of reasons. We’ve dissected the need for a second quarterback here on Lettermen Row for months, but it’s a clear sign that Ohio State is moving forward with that idea as well, something that was generically addressed by Ryan Day during his Tuesday press conference.

“The quarterback situation in college football is as sensitive as it can be,” Day said. “You try to do the best you can. We always want to have four on scholarship, and you do the best you can to adapt year in and year out and make the best decisions you can.”

Day obviously is not allowed to directly address Jack Miller, the long-time Buckeyes quarterback commitment. But his words echo what we’ve suggested here for a long time: Ohio State needs another quarterback in 2020.

The Buckeyes are going to throw everything that they can at Stroud this weekend to make sure the Rancho Cucamonga (Calif.) quarterback wants to return to Columbus for an official visit before a decision is made. They’re also going to make sure the guys he’d be throwing to at Ohio State are in town, and that’s why it’s so vital that receiver commitments Gee Scott, Jaxon Smith-Njigba and Julian Fleming are all going to visit alongside Stroud this weekend.

Fleming is coming on his official visit. But it’s worth noting that Scott and Smith-Njigba are making the trip on their own dimes, representing a real commitment being made by these players to help finish the Class of 2020 on a high note.

Outside of finding a complementary quarterback in the 2020 group, the Buckeyes are also still looking to round out that class along the defensive line and at running back. This weekend they’ll host two more official visitors — one at each of those positions — who could play a big part in where a class that currently ranks third in the country finishes.

The running back, Kevontre “Tre” Bradford from Lancaster (Texas), was the first tailback offered by Ohio State following the departure of Bijan Robinson and Jaylan Knighton to Texas and Florida State, respectively. Yes, other running backs have emerged in the last month as real targets for Ohio State. But the interest in Bradford — and vice versa — hasn’t wavered.

What’s most interesting about Baron, aside from his 6-foot-4 and 255-pound frame, is that his recruitment has stayed relatively low-key despite his lofty ranking. His father, Patrick Abernathy, works in player development at Tennessee. And whether it’s because everyone has assumed he’d stay home and play for the Volunteers or some other reason, there’s been little national discussion about the fourth-ranked player in Tennessee.

The Buckeyes are on the verge of adding defensive lineman Jacolbe Cowan to their recruiting class on Friday night if he picks Ohio State over Georgia, North Carolina, Tennessee and Clemson. The potential addition of Cowan would not impact the decision to recruit Baron because there’s a plan in place to add two more defensive linemen to current commitments Darrion Henry and Ty Hamilton.