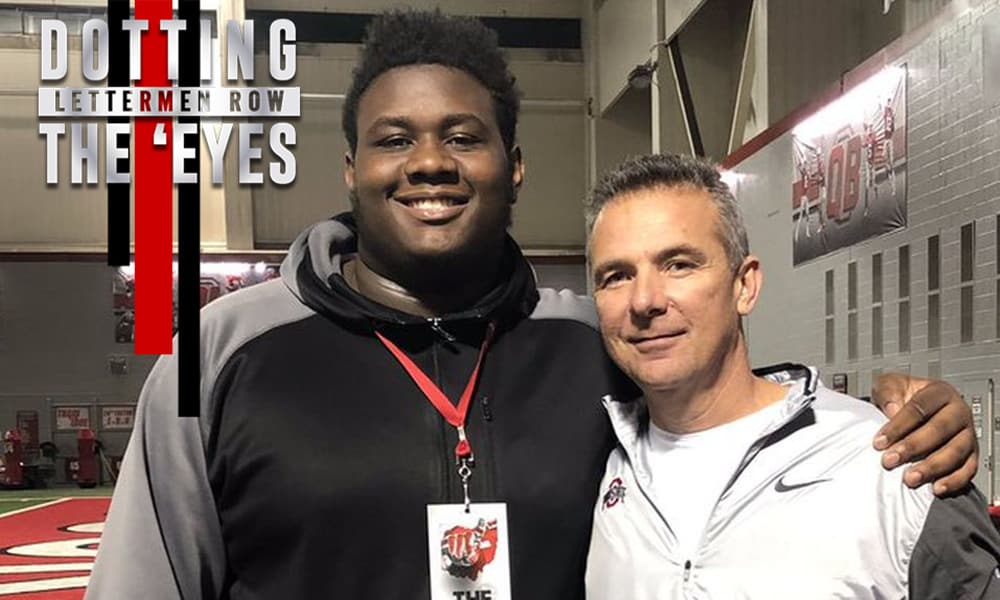 Dawand Jones has been a top target for Ohio State since his November visit. (Dawand Jones/Twitter)

Stay in touch or be left out because Ohio State recruiting is a 24-hour, seven-day-per-week obsession. What’s the latest news as the Buckeyes build for the future? Get that and more Sunday through Thursday on Lettermen Row. Today we talk about Dawand Jones as the Buckeyes prepare for an in-home visit with him and major interest from two new offers.

A day after returning from Penn State, Indianapolis 3-star offensive tackle Dawand Jones will have Buckeyes coach Ryan Day at his home for a big final visit.

Jones, the country’s 85th-ranked offensive tackle, will make his college decision on Feb. 6. Day, along with Greg Studrawa and Kevin Wilson, will spend some quality time in Indianapolis trying to make sure that this past weekend’s trip to Penn State doesn’t spoil their plans of adding him to the 2019 recruiting class for the Buckeyes.

The Buckeyes are working overtime to sign three more offensive linemen in this class. Jones remains the only viable tackle option for Ohio State, making him a serious priority for the coaching staff as it tries to replenish Studrawa’s position group. Penn State is the biggest threat to flip Doug Nester away from the Buckeyes as well.

Blessed to have great conversations with Coach Hafley and Coach Day. Excited to share that I have been offered. #blessed #workworks #BeElite pic.twitter.com/5M9mWC4d8E

Phillips, a standout at La Habra High School, is a 5-foot-11, 180-pound prospect who has recently been in contact with new Buckeyes co-defensive coordinator Jeff Hafley.

“Coach Hafley drove the process,” Phillips told Lettermen Row. “Coach Day flew in to make the offer. They are really down to earth and straight forward. Coach Hafley has been great.

The Buckeyes are just one of many schools that like Phillips. He lists 29 offers already and intended to release a top-10 schools list in the next few weeks — but the Ohio State opportunity changes things a bit for him.

“This shifts [my top 10] completely,” Phillips said. “The program and school and history with defensive backs and now Coach Hafley’s background is really interesting to me. They seem really interested in what I can bring with my skill set.”

“A balance of quality education and football,” he said. “I’m looking for coaches that can develop me as a player and that believe that my skills fitting in their system. The school’s environment is important and opportunity after football.

“Notre Dame, Texas A&M, Cal, LSU, Washington and a few others are near the top of my list.”

Most of the schools Phillips has high interest in are out of the state of California, and he’s got no issue leaving the West Coast for college if it’s the best decision for his future.

“Mom will have a little harder time with it,” he joked. “But they definitely want me in the spot that is best for me, even if it’s out of Cali or the Pac-12.  All of my top schools are out of state. I think I will grow a lot and I am going to chase my dream where ever the fit is right.”

If Ohio State wants to show him that the school is a good fit for him, he’ll need to make a visit. He hopes to do that soon.

“Maybe late February or March,” he said. “I need to speak with my parents.”

The Ohio State reputation in the Baltimore area is a major reason that 2021 defensive end Monkell Goodwine was so excited to land a scholarship offer from Ohio State last week.

A 6-foot-3, 235-pound end at the National Christian Academy in Fort Washington, Md., Goodwine has added offers from Georgia and Penn State in recent weeks as well.

“Larry Johnson is the king on the defensive line,” Goodwine said. “I’m just looking at his product that he puts on the field year in and year out. I know Chase Young is from this area and he’s doing it big.

“When you get offered as a defensive lineman from Larry Johnson this early in the game? That’s big. I’m going to cherish this and build a relationship with him and pick his brain.”

Goodwine wants to visit the Buckeyes in the near future but will make it a point to focus more on his personal growth than recruiting.

“I’m going to take a visit up there. I don’t know when, but I want to make a special trip there. I’m still young in the game,” he said. “I just want to focus on getting bigger, faster, and stronger and keeping my academics high.”

Ohio State recruiting: Which wide receiver could commit to Buckeyes next?
Ohio State: With seven early commits, 2020 class off to quick start