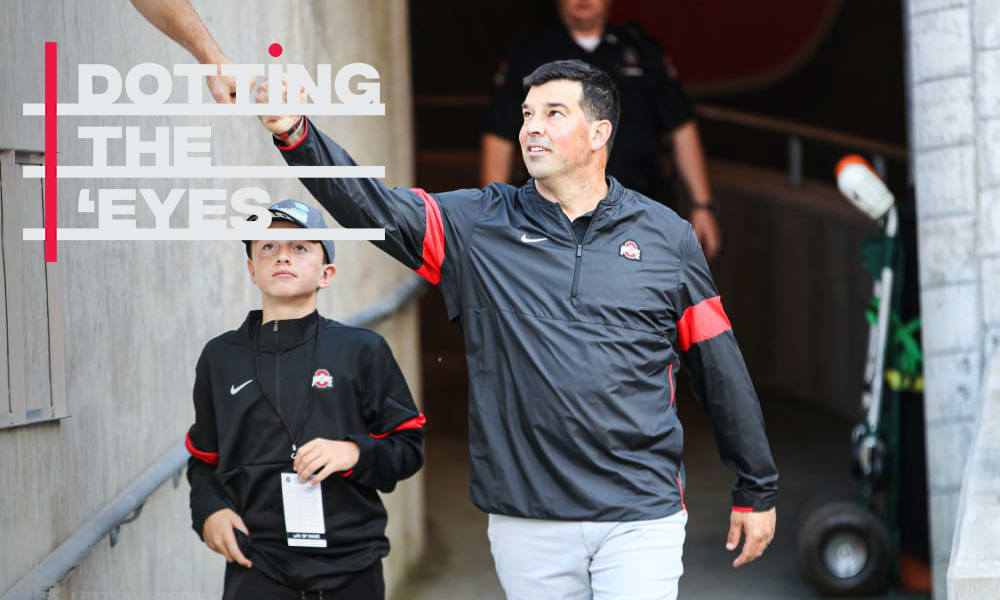 Ryan Day will meet a number of recruits as the Buckeyes host Wisconsin on Oct. 26. (Birm/Lettermen Row)

Stay in touch or be left out because Ohio State recruiting is a 24-hour, seven-day-per-week obsession. What’s the latest news as the Buckeyes build for the future? Get that and more Sunday through Thursday on Lettermen Row. Sunday’s notebook recaps the weekend for Buckeyes commitments and checks in on a pair of 2021 prospects, one from each coast.

The Buckeyes are preparing for a major recruiting weekend with the home game against Wisconsin serving as a backdrop for Ryan Day’s second showcase of the season. One player making his first visit to Columbus for the game will be Darian “Duce” Chestnut, the country’s 15th-ranked cornerback in the Class of 2021 and the fourth-ranked prospect in New Jersey’s junior class.

According to the 5-foot-11, 180-pound defensive back, Ohio State is one of the schools he’s been hearing from the most.

“Ohio State, Pitt, West Virginia and Kentucky,” Chestnut listed as the programs he’s talking to the most right now. “I’ve been talking to [Ohio State defensive backs] Coach [Matt] Barnes. Mostly it’s just been him showing me information on Ohio State, but they’ve not told me what they need to see yet for an offer.

“I talk to Coach Barnes almost every day. I am heading to their game against Wisconsin with my mom, dad and my teammate Alijah Clark.”

Chestnut has six early offers, including Baylor, Maryland, N.C. State and West Virginia. But he admits that receiving a scholarship offer from the Buckeyes would be a recruitment-changing moment.

“I’ve always wanted to play at Ohio State,” Chestnut said. “I want to be a part of that DBU legacy.”

Ohio State has one current 2020 commitment from California powerhouse St. John Bosco in Kourt Williams, and it is also aggressively recruiting 2021 wide receiver Beaux Collins. So, expect to see the Buckeyes on the Braves campus regularly, whenever the recruiting calendar allows it.

As one of the country’s best programs, there are plenty of players at St. John Bosco that will keep Ohio State coming back beyond the Class of 2021 — including 2022 offensive lineman Earnest Greene, who visited Columbus this past spring with Collins and others.

A potential 5-star prospect, Greene is a nasty, 6-foot-4, 300-pound interior line prospect who has been hearing about the Buckeyes regularly from a former Braves offensive lineman: Ohio State star Wyatt Davis.

“Wyatt has been telling me great things about Ohio State,” Greene told Lettermen Row. “I always check them out on TV and see how Wyatt is doing.”

Greene did visit the Buckeyes and was impressed by the way things are run with the program.

“Ohio State is a great school that really stresses academics, and of course they send a lot of guys in my position to the league,” he said. “I am most definitely going to be going back.”

Ohio State commitments, targets have big games over the weekend

A number of Ohio State commitments put up huge numbers over the weekend as high school football teams all over the country are pushing toward the playoffs.

Wide receiver Julian Fleming reeled in seven passes for 127 yards and two touchdowns in a battle of undefeated Pennsylvania prep squads that ended in a blowout 35-0 win for Fleming’s Southern Columbia (Catawissa) Tigers. If you’re reading this, you’ll want to watch the film from that outing because it hints at the truly special talent Fleming has.

Jaxon Smith-Njigba added his name to the Texas record books on Friday night and became the state’s all-time leader in receiving yards (6A, the state’s biggest schools) when he collected 153 yards against Mesquite North. He also scored four more touchdowns as he works to show that he’s the best receiver in the Lone Star State.

Athlete Cameron Martinez continued his bid for Mr. Football in Michigan, leading his Muskegon team to a 53-0 win over rival Mona Shores. Martinez accounted for 282 yards and four touchdowns and continues to be the talk of the high school football scene in Michigan.

Though he’s not an Ohio State verbal, there may not have been a player in Ohio who had a better game this weekend than Cincinnati Roger Bacon star running back Corey Kiner, who went off for eight touchdowns and 323 yards rushing against Cincinnati Hills Christian Academy. Kiner is now one of the just 19 players to ever score eight times in a game in Ohio high school football history.

Ohio State finding it can win on, off field as recruiting priorities change
Why Ryan Watts flipped to Ohio State, how he builds bond with Buckeyes
Advertisement
Advertisement