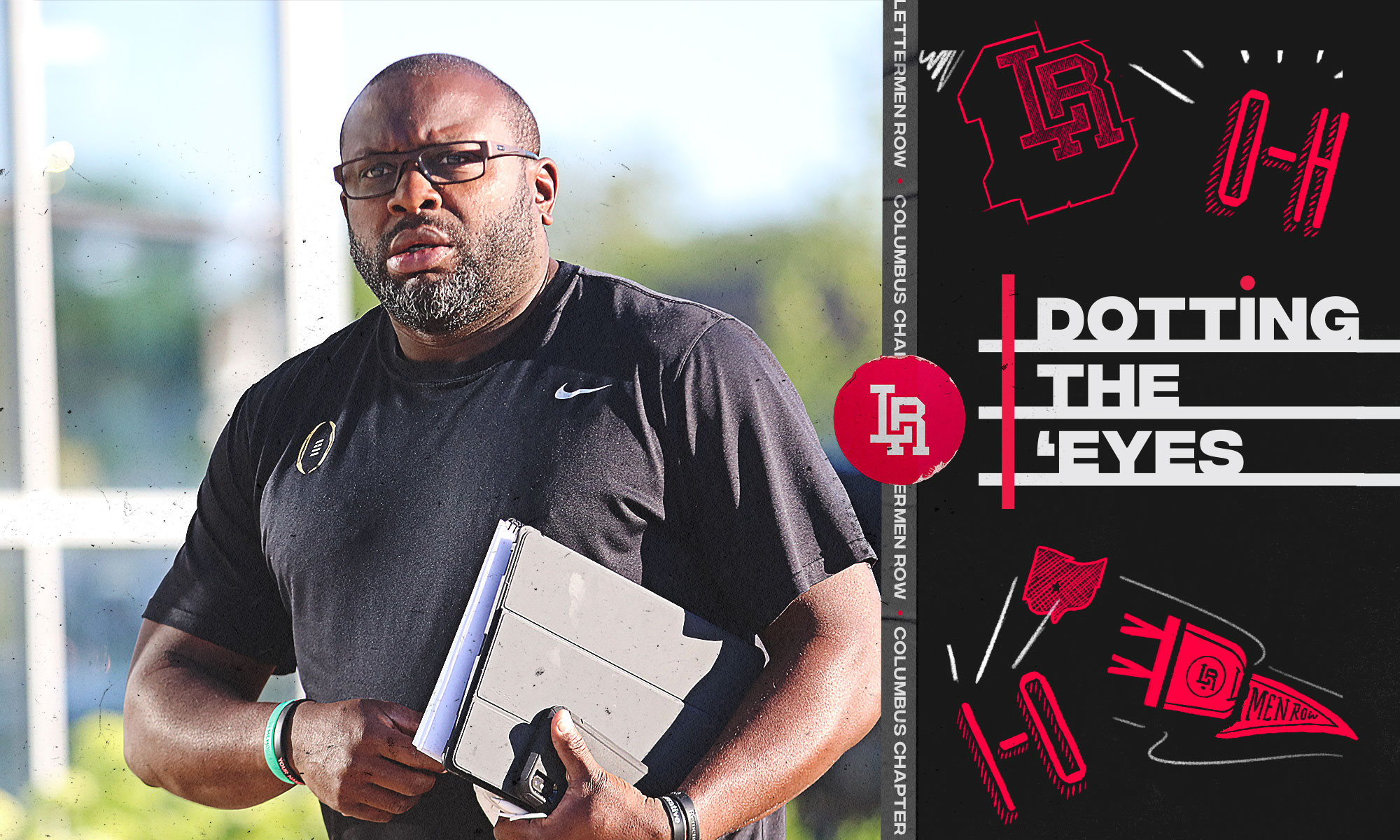 Ohio State assistant Tony Alford is narrowing his focus on a top-ranked running back. (Birm/Lettermen Row)

Stay in touch or be left out because Ohio State recruiting is a 24-hour, seven-day-per-week obsession. What’s the latest news as the Buckeyes build for the future? Get that and more Sunday through Thursday on Lettermen Row. This morning, we talk with Caroll Walker, the coach of Ohio State’s latest 2021 commitment and look at the latest in the recruitment of a top 2022 running back and more.

After what seemed to be very little talk about his recruitment, Ohio State added commitment No. 19 on Thursday night as Virginia 4-star defensive tackle Tyleik Williams picked the Buckeyes.

The reason he did? That’s pretty simple.

“I think that he has been high on Ohio State for a while,” Carroll Walker, the head coach at Unity Reed High School, told Lettermen Row on Thursday. “Larry Johnson is a legendary coach. He’s one of the best coaches in college football, and he trusted Coach Johnson.”

Williams, a 6-foot-3, 315-pound interior lineman, has not visited Ohio State yet. Walker indicated that Williams had wanted to do that before making a decision, but ultimately the chance to play for Larry Johnson was too good to pass up.

“I mean, Coach Johnson is a straight-up person, and Tyleik likes how he works, how he is,” Walker said. “He believes that they have his best interest at heart and he knows he can get better and that Coach Johnson can get him to that next level.

“[Johnson] came down a couple times before the shutdown, and so they’ve met. He’d tell me: ‘I like the kid, I want the kid and I would love to coach the kid.’ That’s tremendous to see for Tyleik, you know? He has a lot of respect for the coach to want to come down and look him in the eyes and say that he can change his life if he just, you know, gives them a chance to work with him.”

Ohio State target has Buckeyes No. 1 on his list

The Buckeyes are working hard to get themselves into a winning position with their top 2022 targets ahead of Sept. 1 when communication with that class opens up, and they’re doing a good job right now with IMG Academy 4-star running back Kaytron Allen.

Allen is the country’s No. 11-ranked tailback and hails from Virginia originally. He ran for more than a 1,000 yards and 15 touchdowns as a sophomore for the Ascenders despite splitting time with Georgia 2021 commit Lovasea Carroll.

Tony Alford and Ohio State are in a position to be selective in the Class of 2022, and Carroll is emerging as one of the top players at the position along with Pennsylvania’s Nicholas Singleton. There’s a long way to go, and eventually there will be a number of key visits ahead for Allen. But it’s so far so good for the Buckeyes.

The nation’s No. 3-ranked guard will make his college decision on Sunday, choosing a winner from five different schools.

Ohio State has long been a top contender for Burton, but the interest from both sides has seemed to wane in recent months, precipitated primarily by the recruiting dead periods caused by Covid-19. Kentucky is the frontrunner and has been since the summer. Without any chance to make follow-up visits to Columbus, Tuscaloosa, Eugene and Clemson, the hometown team has seemingly cleared the final hurdles in keeping Kentucky’s top-ranked prospect at home.

The Buckeyes offensive line recruiting started off with a bang in 2021, but it has leveled off in the last few months. Now the focus is almost exclusively on Tristan Leigh, the 5-star offensive tackle from Virginia. Donovan Jackson and Ben Christman, each of whom could play tackle or guard, are most likely to begin their college careers at guard, and that’s led to a shift in focus away from players like Burton, Rocco Spindler and others and toward pure tackle prospects.

If the Buckeyes miss out on Leigh — and it sure seems like they’re trailing at least two other schools in that race right now — there may be a need to completely reshuffle the deck if there are any plans to add another lineman.

There are new offers going out from Ohio State this week, and Tony Alford is the assistant coach who extended them both.

Colorado lineman George Fitzpatrick, that state’s No. 2-ranked prospect in 2022, earned his Buckeyes offer on Wednesday.

Unreal!! After talking with @CoachTonyAlford I’m excited, honored and humbled to announce that I have received an offer from THEE Ohio State University! Thank you to @OhioStateFB for this incredible opportunity!! @CCNextLevelFB @sheridanswag @CWildSports pic.twitter.com/hrJSvjiKZP

Wednesday also saw an offer go out to Memphis (Tenn.) Christian Brothers athlete Dallan Hayden. A 5-foot-11, 192-pound prospect, Hayden is the son of former Tennessee standout and five-year NFL veteran Aaron Hayden. The conversation between the Buckeyes and Hayden, who is ranked as the No. 10 prospect in the Class of 2022 in Tennessee, begun only this week. But he’s excited to grow a relationship with Alford and Ohio State.