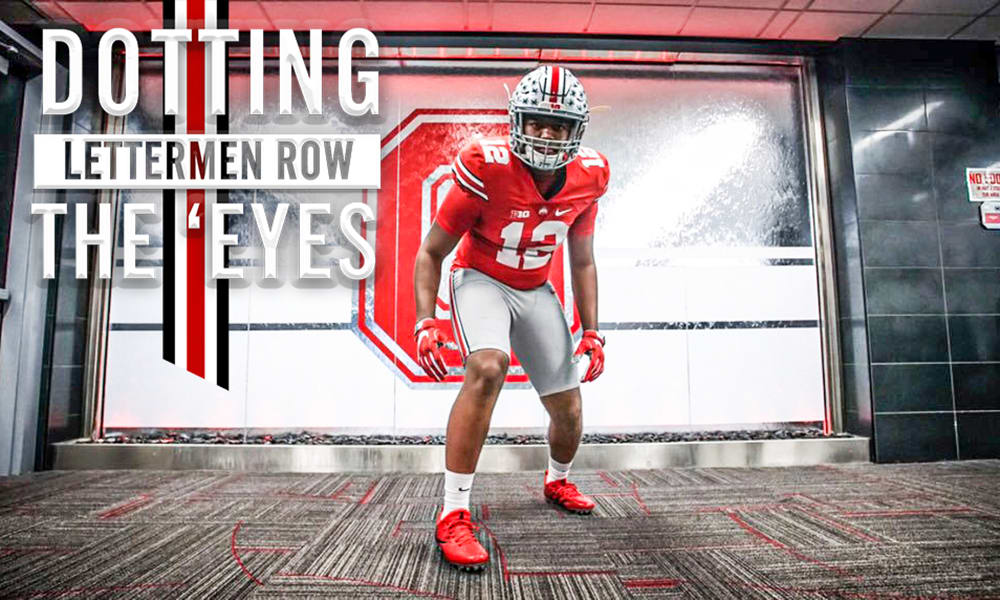 Stay in touch or be left out because Ohio State recruiting is a 24-hour, seven-day-per-week obsession. What’s the latest news as the Buckeyes build for the future? Get that and more Sunday through Thursday on Lettermen Row. Today’s edition talks Cody Simon, Emeka Megwa and a key official visitor set to arrive in a week.

There are only a few linebackers on the Ohio State big board in 2020, and one of them is a player they offered a bit later than most. It hasn’t stopped the Ohio State staff from making a big impression on New Jersey 4-star prospect Cody Simon.

“They know that they came a little later than most,” Simon, the country’s 11th-ranked outside linebacker, told Lettermen Row. “But they are doing the best they can to make me feel welcome and supported.

“The coaches are also really easy to talk to. It started with [defensive coordinator Jeff] Hafley when he came to the school and he was extremely transparent with me. He told me everything about my recruitment with Ohio State.”

The primary reason Ohio State was late to the party was that it assumed that Simon would almost certainly head to Notre Dame, where his brother Shayne plays football. When it became apparent that wasn’t a done deal, the Buckeyes jumped into the mix and have done so with fervor.

“They just thought that I was a lock for a school when I did my best to make it clear that I had no favorites in schools yet,” Simon said. “No other places have been [as] transparent. Coach Hafley told me how he just got to the school and was still trying to figure out recruiting. He told me where he came from and that after watching my film he was really interested in me.”

Simon is very interested in Ohio State, too. He visited Columbus briefly in early May, and that trip only served to whet the appetite for another visit, which he’ll make over the June 21 weekend when he takes his official visit to Ohio State.

“[Ryan] Day, Hafley and [linebackers coach Al] Washington all made it clear to me that I was one of their top guys in recruiting, and being able to talk to all of them really helps me believe that they feel highly of me,” Simon said. “The last time we were up there we were very short on time, so we only really got to see the practice and the football facility. We are eager to just see everything like the campus and all parts of the school.”

Ohio State has a major weekend being set up for June 21, but this weekend is also turning into a key one for the Class of 2020. The weekend’s list was bolstered on Sunday night when 4-star lineman Jacolbe Cowan announced on Twitter that his first official visit would be to Columbus for a weekend trip to Ohio State.

1st Official Visit June 15th-17th.
My family and I can’t wait to get back to Columbus!!! #GoBucks 🌰 pic.twitter.com/R9BYv3Zxno

“This was pretty much the only official visit that I could fit into my schedule due to Rivals 5-star camp and The Opening Finals,” Cowan said. “It’s really just about getting a chance to spend quality time with the staff and players and also just getting the entire in-depth Ohio Stat experience outside of the game day atmosphere.”

Cowan is the country’s 12th-ranked defensive tackle, and he’s been to Columbus twice previously for visits — both times while Urban Meyer was the main in the charge. And as he and his family get ready to learn more about Day, Cowan has no problem letting his mom take the lead.

“If there are any things we need to do or see, I’ll leave that up to my mom,” Cowan joked. “She has the checklist.”

He’s too young to have an official ranking right now, but Fort Worth (Texas) Nolan Catholic 2022 tailback Emeka Megwa is likely to be a 5-star prospect in the rising-sophomore class. Because of that, he and his family have decided it’s time to get on the road and start seeing top schools right now.

Last week, the 6-foot, 200-pound Megwa and his mother tripped to Ohio and spent a long day with the Buckeyes and running backs coach Tony Alford. Megwa was at Ohio State on Thursday but didn’t camp, choosing instead to take a look at the rest of the school’s offerings and make sure that the football program’s proficiencies were matched by the academic institution.

The family was not disappointed.

“My mom liked them a lot,” Megwa told Lettermen Row. “They are hard on you about your grades. I expected that because the coaches have told me it, but mom kind of thought it was just about football. She was shocked to hear about the alumni base and the fan base.”

Though he has three years of big-time high school football ahead of him, this visit with the Buckeyes should keep them near the top of Megwa’s choices for years to come.

“It was just overall a great visit,” he said. “I can’t wait to come back for a game or just another visit.”

While we’re speaking of guys that are way too young to really worry about, let’s introduce the next big thing from Mentor.

His name is Brenan Vernon, and he’s never played a snap of high school football or stepped foot in a high school classroom. But the 2023 prospect turned some serious heads during the Buckeyes one-day camp last Thursday. He was offered by Kent State at the camp and was pulled aside by Larry Johnson, who asked him for another opportunity to coach him up.

“Coach Johnson talked to me after and said that I have really great potential,” Vernon told Lettermen Row. “It’s just all up to the amount of effort and work I put into being the best I possibly can be. He mentioned that he would like me to come back this upcoming Saturday for the last camp to get some more work in. So that’s exactly what I am going to do.”

Vernon is a 6-foot-4, 235-pound soon-t0-be freshman, and he’s grown up dreaming of Ohio State as a young kid in Mentor. He’ll be tested over the next few years as his recruiting star rises, and he’s in a great program to make sure he doesn’t get ahead of himself.

“It is pretty crazy to me,” Vernon said. “I’m just trying to stay humble and focused while trying to better myself each and every day by working my hardest. Mentor’s coaching staff is making sure that I am working every rep and every moment as hard as I can.”

Keep an eye on Vernon in the next few years.