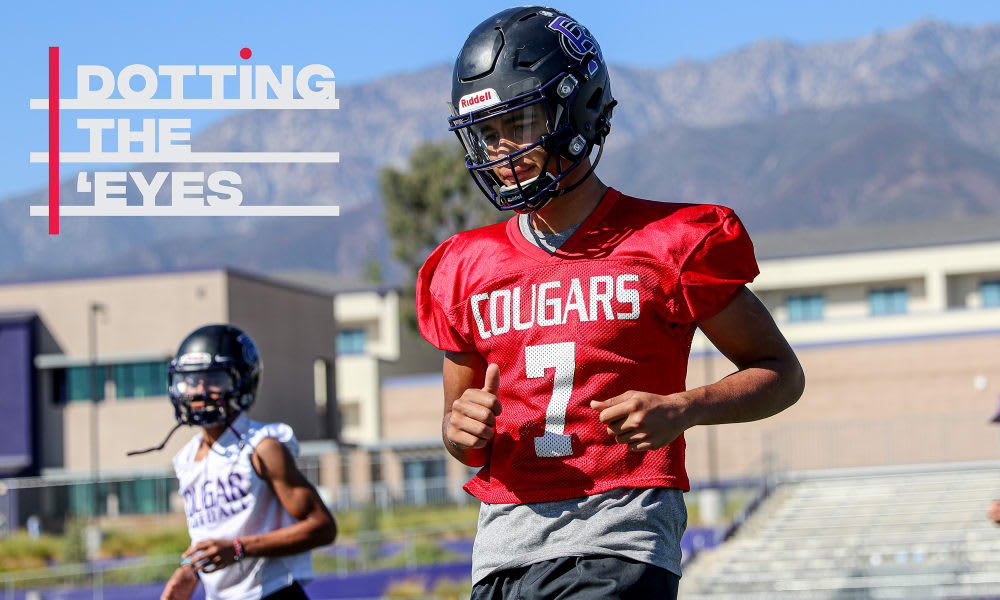 C.J. Stroud and his Ohio State recruitment will get more interesting in the next three weeks. (Birm/Lettermen Row)

Stay in touch or be left out because Ohio State recruiting is a 24-hour, seven-day-per-week obsession. What’s the latest news as the Buckeyes build for the future? Get that and more Sunday through Thursday on Lettermen Row. Sunday’s notebook has an update on the recruitment of C.J. Stroud and updates on a few young Ohio prospects.

Every week there are potential wrinkles on the recruiting trail, and last weekend while the Buckeyes were playing in a monster game thousands of miles away, one of their top remaining 2020 targets was at home in California.

And C.J. Stroud was not in Eugene, Oregon, as he was expected to be.

I Won’t be visiting Oregon this weekend…

There’s been no further explanation or expounding on that tweet from Stroud, but it’s worth noting that the weekend trip didn’t happen. Next weekend the country’s No. 3-ranked pro-style quarterback is supposed to visit Michigan, and the week after that there’s a planned official visit to Ohio State.

Three days after that, the early signing period begins. Stroud has continued to insist that he’ll make a college choice during that timeframe. So when exactly will he visit Oregon, a team that’s been considered a favorite throughout his recruitment?

If Stroud is going to make a return to Eugene for an official visit, it will now likely have to happen midweek — and that’s difficult to arrange and facilitate on short notice. With the Ducks playing in the Pac-12 championship game, there is no opportunity for him to head to Oregon this weekend in lieu of a trip to Michigan.

We’re still sorting through the near 75 visitors who made their way to Ohio Stadium for the game against Penn State, including Marysville 2022 linebacker Gabe Powers.

“The visit was great,” the 6-foot-4, 220-pound sophomore told Lettermen Row. “I talked to [linebackers coach] Al Washington and his family after the game, and that meant a lot to me.”

For Powers, trips to campus are the best way to build a relationship with a college coaching staff — and he was in Columbus twice this season. Those moments, especially after a big game and with the coach’s family nearby, help him and other recruits see the men recruiting them as just that: Men, not just coaches. Right now, the entire focus of Powers recruitment is relationship-building, and there’s no pressure to commit early being applied by Ohio State.

“No, there’s been no pressure coming from them,” Powers said. “I’m just going to keep my options open. I am going to end up going to where I feel the most comfortable and where I fit in the most.”

Ohio State, Michigan, Colorado and Florida State are among the six early offers for Powers.

Staying in Ohio and the Class of 2022, it may be time to introduce Waverly star Will Futhey, an intriguing sophomore who is still waiting for his first offer. He also was invited to the Buckeyes game against Penn State and left feeling very good about where things are headed between the program and himself.

“It was my first time there as a recruit,” the 6-foot-5, 200-pound Futhey told Lettermen Row. “But I’ve been to Notre Dame, Cincinnati and Akron before.

“At Ohio State, you really feel just a sense of belonging and walking down that tunnel just gives you so much adrenaline. It’s indescribable how amazing Ohio State was.”

Growing up just 60 miles south of Columbus, Futhey grew up rooting for Ohio State but is trying to view things solely through the objective eyes of a recruit. Even with that being the case, the Buckeyes attention to detail stood out during his first game-day trip.

“From the start of the visit, the coaches really make it like a personal trip,” he said. “And then you first hit that field it just feels like all eyes are on you and that you can do anything in the world because Buckeye Nation is amazing. You really feel the love. Being a sophomore you can only imagine what it will be like down the road. They really just make you feel at home the whole time.”

Ohio State is looking at Futhey as an athlete right now, watching how his body develops in the next few years. At his size already, he’s likely to grow into a defensive end or a tight end, but there’s still plenty of time to figure that out.

Ohio State continues to lead in the recruitment of Solon 2021 4-star defensive end Najee Story as he continues playing it cool in his recruitment.

The No. 6-ranked prospect in Ohio’s junior class, Story made a pair of visits to Ohio State in November, including the Penn State game.

“It was awesome,” Story told Lettermen Row. “The crowd was electric. It was just great in general.”

When the 6-foot-4, 240-pound lineman visited for the Buckeyes game against Maryland on Nov. 9, he left early and didn’t get to spend time with any of the Ohio State coaches. That was different this most recent time around.

“I saw [defensive line coach Larry] Johnson and [defensive line assistant coach Kenny] Anunike,” he said. “I just congratulated them on winning the game and said that it was great to be there for that game.”

One thing that stood out for Story this time around was the vibe in Ohio Stadium. He felt the pressure in the air and thinks it’s something that would motivate him if he was in that situation. Still, he’s not ready to shut down his recruitment as he considers what else is out there beyond the Buckeyes.

“I love challenges like that, and going out there and exceeding expectations as well,” Story said. “I just want it to be the right choice, because this is my future at the end of the day. I want to make sure that everything is right, and that me and my family are comfortable with the decision.”