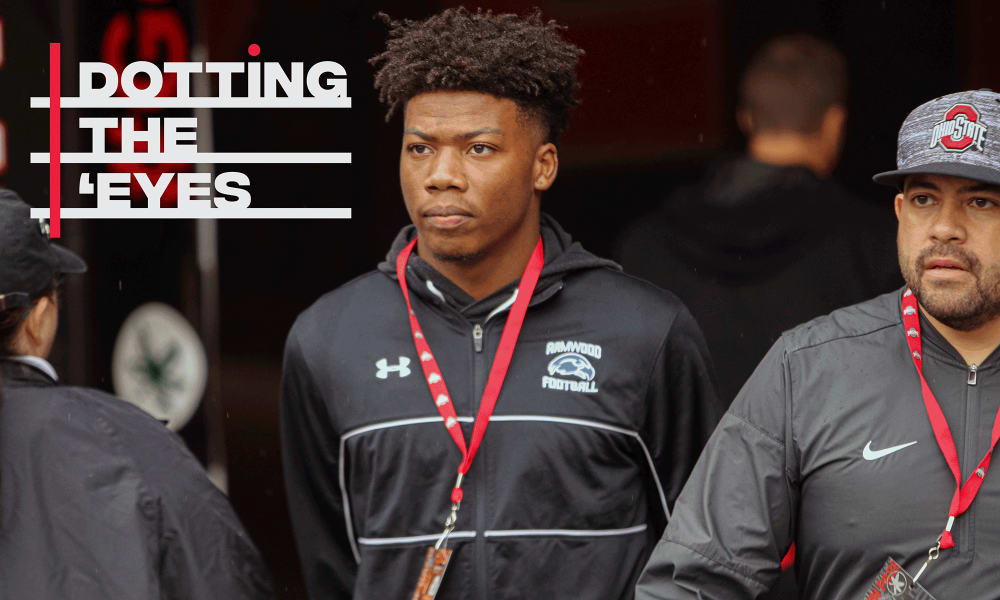 Charles Montgomery has been talking to Ohio State a lot over the last few months. (Birm/Lettermen Row)

Stay in touch or be left out because Ohio State recruiting is a 24-hour, seven-day-per-week obsession. What’s the latest news as the Buckeyes build for the future? Get that and more Sunday through Thursday on Lettermen Row. Today’s notebook features three young players with serious interest in the Ohio State football program.

Charles Montgomery has Buckeyes as ‘top pick’ after visit

Ohio State hosted Armwood High School (Seffner, Fla.) 2021 athlete Charles Montgomery for the first time during their late-October showdown with Wisconsin. The 5-foot-11, 185-pound prospect is being recruited by the Buckeyes as an offensive, Swiss-Army knife type of player. And he left Columbus impressed and happy with the status of his relationships at Ohio State.

“It was everything I could imagine,” the country’s No. 23-ranked junior athlete prospect told Lettermen Row following his trip. “Everything about it stood out to me.’

The Buckeyes are one of 15 early offers that Montgomery has accumulated, a list that also includes Alabama, LSU, Penn State and Florida State. He’s been a regular in conversation with Ohio State running backs coach Tony Alford for months and was hoping to get to campus earlier this season, but it didn’t work out until the Wisconsin game. That trip afforded him the chance to talk to Alford more and also introduced him to wide receivers coach Brian Hartline.

“I hung out with both [Alford and Hartline],” Montgomery said. “We talked for a bit. They told me that they see me as a guy that they can hand the ball off to if I am lined up in the backfield and someone that can be put out in the slot as a receiver.”

The trek north to Columbus has set an early tone in the recruitment for Montgomery. He visited Florida State last weekend, and his plans are to make a number of other visits to see who can stack up with the Buckeyes before his May 24, 2020 decision date.

“Ohio State is a top pick, but I have my options open,” Montgomery said. “I plan on looking at other schools in the near future to compare things.”

Tennessee cornerback to visit Ohio State at end of November

The Buckeyes have enjoyed recruiting the state of Tennessee for a while now, and they’re still hoping to pull 2020 defensive end Tyler Baron from the state in this cycle. But they’ve also begun focusing on 2021 and beyond.

One player that Ohio State has spent some time getting to know is cornerback Andre Turrentine, a 6-foot, 170-pound athlete from Ensworth High School in Nashville.

“I talk to the Buckeyes a lot, actually,” the country’s No. 14-ranked junior cornerback told Lettermen Row. “Usually it’s Tony Alford, but I talk to him, [staff member] Eric Miscuda, [defensive backs coach] Matt Barnes and [director of player personnel] Mark Pantoni. Someone every day.”

Last weekend, Turrentine visited LSU, one of the 20 schools to offer him to this point — a list that includes Ohio State, which offered at the end of August. Right now it’s LSU, Ohio State and Penn State — three of the schools in the top 4 of the newly released College Football Playoff rankings — that he’s hearing from the most.

At the time of the offer, Turrentine told Lettermen Row that he “had to get up there” to Columbus, and now he has his first visit date in mind. He also is trying to keep his mind focused on the right things as the chaos of recruiting begins creeping into his daily life.

“I will be up there for the Penn State game,” he said. “It’s all kind of crazy, but I’m just focused on my team right now and focused on making this playoff run.”

Ohio State has attention of defensive lineman from Texas

Larry Johnson’s reputation is far-reaching, and with every NFL defensive award earned by players like Nick and Joey Bosa — not to mention the national accolades for Chase Young — it seems that reputation grows larger.

It’s no surprise, then, that Johnson’s legend combined with the spotlight earned by the Bosas and Young is garnering some extra attention for the Buckeyes with young defensive ends all over the country.

Take the example of Kaleb James, a freshman- defensive lineman at Nolan Catholic High School in Fort Worth, Texas. Growing up in the Lone Star State hasn’t stopped James from developing an early affinity for Ohio State that could make his recruitment worth watching down the road.

“Ohio State is actually at the top of my list as far as schools I would like to attend one day,” the 6-foot-4, 220-pounder told Lettermen Row. “I am a big fan of the Bosas and have been compared to them quite often. I’m hoping to attend camp at Ohio State next summer as well as some other schools in the area.”

Before the start of his freshman year — a season in which James has started every game at the varsity level and has double-digit sack numbers — he camped at Clemson and Alabama and turned the heads of the coaches. In Tuscaloosa, he worked out as a tight end, but his future position is on the defensive side of the ball, the position he camped at for Dabo Swinney. James, a teammate of 5-star 2022 prospect Emeka Megwa, said he and his running back teammate have had a little conversation about the Buckeyes, and it’s reinforced his belief that maybe his college years will be spent outside of Texas.

“Emeka keeps things very close to the vest to be honest, but he did give me some insight on his visit there,” James said. “[He] told me it was an amazing place.

“I am born and raised in Texas, but I have never really have been a fan of the Texas heat. I prefer to play in cooler weather, plus I just want to try something new since I have lived here my whole life.”

It’s early in the process, and there’s still a lot of development ahead of him. But remember the name Kaleb James as he grows throughout his high school career.