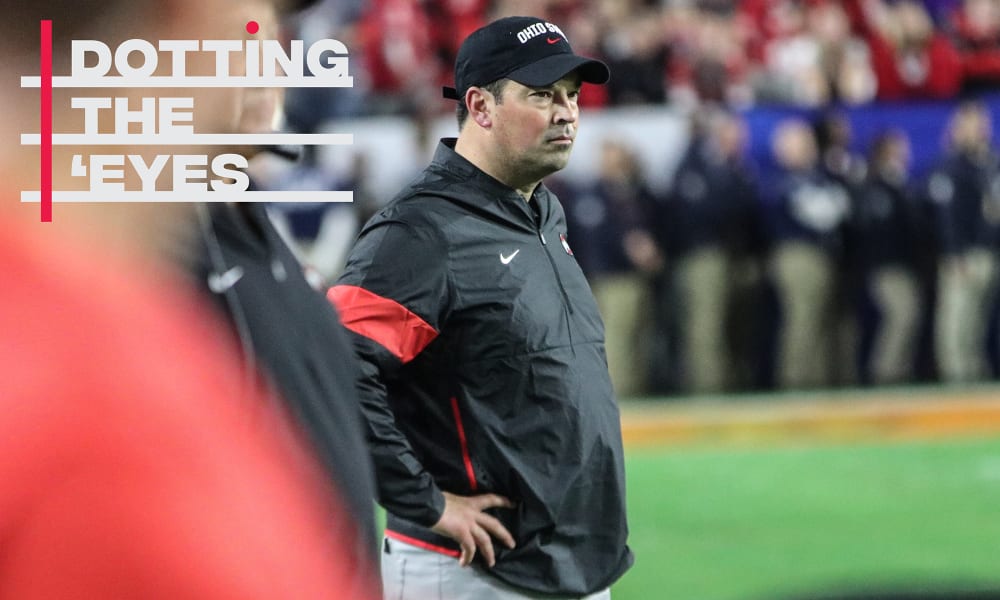 Ohio State coach Ryan Day and the Buckeyes are back to work to close out the 2020 recruiting cycle. (Birm/Lettermen Row)

Stay in touch or be left out because Ohio State recruiting is a 24-hour, seven-day-per-week obsession. What’s the latest news as the Buckeyes build for the future? Get that and more Sunday through Thursday on Lettermen Row. Monday’s notebook attempts to reset the Ohio State recruiting board as the Buckeyes coaches and football team returns to campus.

Ohio State coaches back to work

Following the Fiesta Bowl loss to Clemson, the Ohio State coaching staff took what was some well-deserved and much-needed time off.

The inability to spend quality time with their families over the holiday, combined with the recruiting dead period, provided the ideal time for a refreshing respite.

But this weekend brought football back into the spotlight as Ohio State’s 2020 early-enrollees rolled on to campus with a number of key questions needing to be answered by some big-time prospects who can help the program next season. As those 14 new Buckeyes arrived, the Ohio State coaching staff made their way back into town as well with the goal of providing a warm welcome and getting themselves back to work as the 2020 recruiting cycle draws closer to its end.

There are only a few potential items to be addressed in this cycle for the Buckeyes. And this next 10-day stretch before a new contact period begins on Jan. 17 will be vital for Ohio State as it examines the best options still available for the February signing period.

The single greatest area of concern for the Buckeyes is the secondary. This week will be especially important when it comes to evaluating defensive back prospects, because it’s a decision that will need to be made collectively among the Ohio State coaches — from Ryan Day to Matt Barnes over to Mark Pantoni and the recruiting staff.

Without a final answer about Jeff Hafley’s replacement yet, the options that the Buckeyes reach out to will have to trust Ryan Day’s plans for the future. Even if there is a likely replacement waiting in the wings, until it’s official Ohio State will be playing catchup to its competition on the recruiting trail in the relationship game. That’s going to be very important with only three weeks until February.

What’s the latest with Cameron Martinez?

While the Buckeyes coaching staff was on their break, they remained in very consistent and regular contact with Cameron Martinez.

The only Ohio State commitment who opted against signing a Letter of Intent in the December signing period, Martinez announced he would wait until February as a result of Hafley’s departure to become the coach at Boston College.

As that news found its way to the public, the schools that Martinez was most closely associated with during his recruitment were immediately linked to him again. The two-time Player of the Year in Michigan has had conversations with Northwestern and Minnesota since, but to this point there’s been nothing planned in the way of visits to any other schools. He did take official visits to those schools already, so if there’s any interest in getting back to those places, the visits would need to be of the unofficial variety.

In recent weeks, new schools have initiated conversations with the two-way athlete as well, including Notre Dame. But Martinez said there’s been limited discussion since they first reached out. The Irish could increase their push for Martinez in the next few weeks, though, and it’s likely that other schools will do the same though he remains committed to Ohio State.

For Martinez, much of what happens next is tied to Hafley’s replacement. The belief is that Ohio State will not be moving on to candidates other than former Buckeyes assistant Kerry Coombs until an official answer is given. Right now, he is trying to win a Super Bowl with the Tennessee Titans. The interest in Coombs is not a secret, but if he’s interested in the Buckeyes job, he can’t do anything about it — including recruiting — until he’s actually working for them. That means there can be no conversation with Martinez or others until then.

Obviously for Martinez and for the Buckeyes chances of retaining his commitment, the sooner that happens the better. The longer this goes on, the antsier Martinez could get, and that makes it easier for other schools to get into the conversation.

What is Ohio State doing with graduate transfers?

One of the major storylines this time of year is the availability of graduate transfers and the names in the portal in general.

The Buckeyes added a key piece of their roster through the grad-transfer route when they picked up Jonah Jackson from Rutgers, and there’s some belief they could turn that way again to fill a spot or two in the coming weeks and months.

Darnay Holmes, the talented cornerback from UCLA who was heavily recruited by Ohio State in 2017, will not be on that list. Holmes has reportedly decided to enter the NFL Draft rather than pursue grad-transfer opportunities. There certainly would have been some interest from the Buckeyes if he had decided to return to school.

The other name that has emerged as a possibility is former Temple defensive lineman Quincy Roche.

A 6-foot-4, 235-pound defensive end, Roche had an explosive year for the Owls, collecting 13 sacks en route to earning American Athletic Conference honors as the Defensive Player of the Year.

Ohio State had been looking for another rush end in the 2020 recruiting class, and though the return of Jonathon Cooper and Cade Stover’s transition from linebacker to defensive end mitigated that need, a player of Roche’s caliber could be too good to pass up if he’s interested in the program. As a defensive end hoping to make a leap to the next level, it’s safe to assume there is.

A number of major programs are pursuing Roche, and most of them will offer a great chance to start and play significant minutes. Ohio State’s depth at defensive end may be a deterrent for him, but the opportunity to learn from Larry Johnson could outweigh that. There’s a decision coming soon, Roche says, but to this point, there are no real clues as to what direction the Maryland native is leaning at this point.