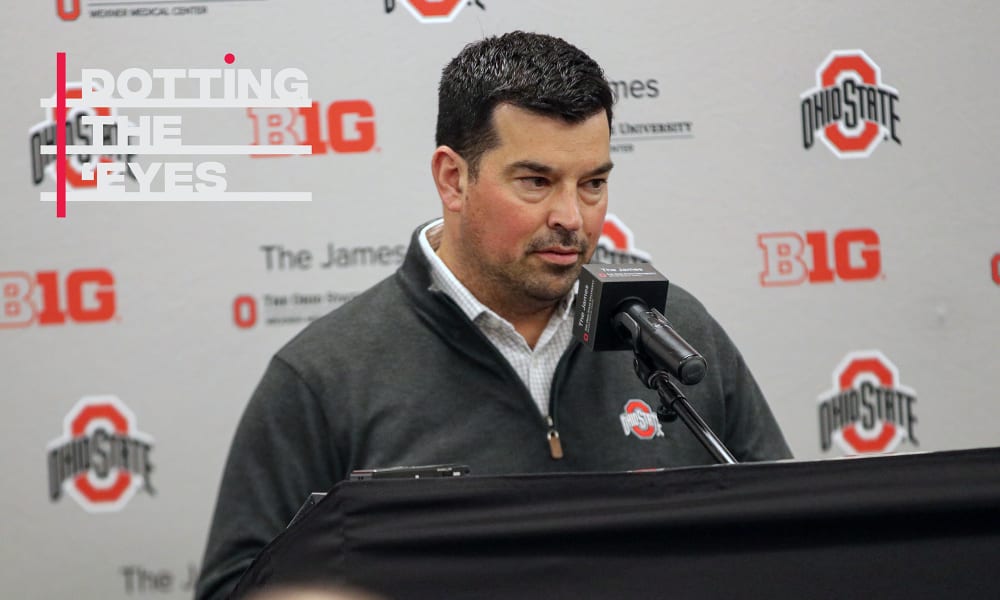 Ryan Day had a lot to say about his early-enrolled 2020 signees and Cam Martines on Signing Day. (Birm/Lettermen Row)

Stay in touch or be left out because Ohio State recruiting is a 24-hour, seven-day-per-week obsession. What’s the latest news as the Buckeyes build for the future? Get that and more Sunday through Thursday on Lettermen Row. Wednesday’s signing day notebook catches up on Ohio State’s addition of Cameron Martinez and more from the now uneventful February signing day.

After a topsy-turvy couple of weeks in late December and early January, Buckeyes commitment Cameron Martinez announced a little over a week ago that he was no longer considering any other schools. He was focused only on Ohio State with the plan of signing his Letter of Intent to the Buckeyes on Signing Day.

Well, Wednesday was Signing Day and Martinez did just that, sending his letter to Ohio State around 9 a.m. and then taking part in a Signing Day ceremony at Muskegon (Mich.) High School around noon. There was no drama for Martinez and none for the Buckeyes, rather the final step in a long recruiting road.

Ryan Day, speaking from the team room at the Woody Hayes Athletic Center on Wednesday, welcomed Martinez to the Ohio State program.

“Cameron Martinez signed today,” Day said. “Very excited to have Cam. [I] thought he and his family handled things really well with [former Ohio State defensive coordinator] Jeff [Hafley] leaving and then [Buckeyes current defensive coordinator] Kerry [Coombs] jumping in. He really handled it like a pro. The family was unbelievable, and we’re really excited to have him.”

As we’ve addressed here at Lettermen Row, Day’s approach to Martinez’s brief uncertainty — and Paris Johnson and others in the past — was simple: Provide comfort and understanding to the player and the family as they tried to make the most important decision of their young lives. He touched on that approach during the afternoon press conference.

“I told him if he needs to go look at other places, that he can do that,” Day said. “I said I’m not going to like that too much, but at the same time I respect your family enough that you can go ahead and check some places out. Now, he never really ended up doing that.

“But I think he really understood that and respected the fact that we didn’t hold him to the fire, anything like that. We said, listen, you want to go check out some schools, feel free. Once we get the secondary coach and coordinator in place, I know you’re going to love it. And he did. It all worked out.”

What hasn’t been worked out just yet is where Martinez will begin his college career. Right now the plan is to give him a chance to see where he fits best, on offense or defense, and then let things go where they’ll go.

Ohio State would prefer not to have December early signing period

There were all kinds of topics discussed during Day’s press conference on Wednesday, including his opinions on how the early signing period, a three-day window in December, has taken some of the shine off of the February signing day that used to bring fireworks with it.

“Signing day is very different now than it used to be,” the Buckeyes coach said. “We were just laughing about it as coaches. We had one guy sign today, which is just — the landscape of recruiting has changed a lot.”

Change is not always a good thing, though, and there are concerns for Day, especially if his program is competing for championships. Some of those concerns were addressed when he joined Birminology in December, but it seems the time between then and now has afforded him a bit more time to think about the problem.

And yes, it’s clear he thinks it’s a problem.

“What it did was with the early signing day is it moved official visits to the spring,” he said. “Then what that did it took a little pressure off of January. Put a ton of pressure in December, I mean, an unbelievable amount of pressure.

“I think with playing a championship game and you have one week to go out on the road as a head coach and one of those, two of those are going to be some of those award nights and you have to go see 14 mid-year guys from coast to coast when you recruit nationally like we do, it’s almost impossible. I think that’s very hard. What it’s done it’s taken a lot of pressure off of January. What January has become is what old spring recruiting used to be.”

There’s not much doubt that the Buckeyes will expect to see a handful of the 14 midyear enrollees working into the two-deep rotation this fall, and Day suggested that each of Ohio State’s four, highly-ranked receiver signees, should be counted on that way.

“They all do, they all do,” he said when asked specifically if Jaxon Smith-Njigba had a chance to work into the two-deep as a true freshman. “I mean, it’s not like we’re coming back with five or six returning starters as we have in the past couple of years. That’s a huge emphasis point. [Ohio State receivers coach] Brian [Hartline] has his hands full this spring, making sure we get guys ready to go.”

Hartline and Day could get a little help in the receivers room and take a little bit of pressure off of the freshman wideouts if C.J. Saunders is granted a sixth year by the NCAA. The Buckeyes are still working on getting that exception for the walk on-turned-captain who missed all of last season with a pair of leg injuries.

“We’re waiting to see if they’ll grant him a sixth year.”