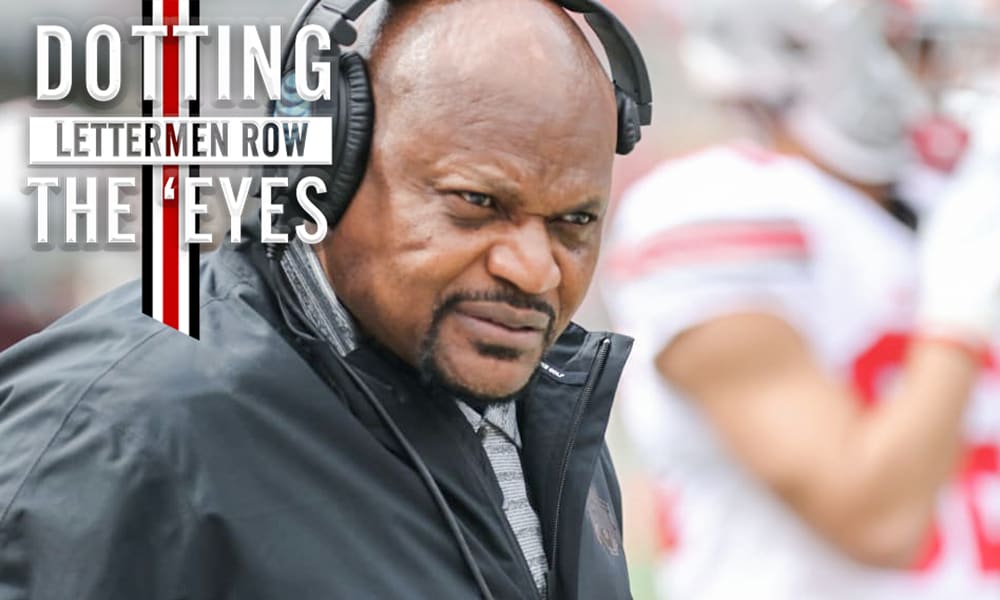 Larry Johnson will start recruiting the 2021 class for Ohio State in the near future. (Birm/Lettermen Row)

Stay in touch or be left out because Ohio State recruiting is a 24-hour, seven-day-per-week obsession. What’s the latest news as the Buckeyes build for the future? Get that and more Sunday through Thursday on Lettermen Row. Today’s recruiting notebook looks at a handful of 2021 prospects who are hoping to hear from Ohio State as Sept. 1 approaches.

It’s obvious that college football recruiting is big business. After all, that is the lifeblood of college football, and knowing that, it’s wise to expect that there is a lot of cash being spent all over the country to sway high school football players in a specific direction.

What may surprise some folks is how much less money, comparatively speaking, Ohio State spends when stacked up against many of the country’s other elite college football programs. This tweet from a few weeks back — though unverifiable — gives us a good starting point for the discussion.

The recruiting budgets of the top CFB teams is more than a lot of G5 schools make in a year once you subtract expenses from their share of their respective league's revenue sharing package. pic.twitter.com/u0wbhe4noJ

What that shows are a handful of the country’s best teams and a handful of once-proud programs trying like hell to get back into the upper-echelon of football by renovating their approach to today’s more modern methods. Many of the nation’s biggest universities are there as well, though you don’t see blue-bloods Ohio State or Alabama on that list.

In a very short period of time, Georgia has become one of the country’s biggest recruiting machines. It’s easy to see why the Bulldogs have exploded the way they have.

From Gentry Estes of the Louisville Journal-Courier:

From fiscal years 2016 through 2018, Georgia’s football recruiting expenditures totaled just over $1.5 million more than any other of the nation’s 52 public Power Five universities, according to figures reported to the NCAA and obtained by the Courier Journal and USA TODAY Network in partnership with Syracuse University’s S.I. Newhouse School of Public Communications.

Curious why Kirby Smart is recruiting at a much higher clip than Mark Richt seemed capable of doing? Look no further. Vince Dooley, a former Georgia coach and athletic director, summed it up nicely in the Journal-Courier’s story.

To be able to compete at that highest level, the way that you do it is to recruit at the highest level, and the way you do that is that you spend a lot of money going wherever you need to go. No limit.

Of course, there are limits. Ohio State has been one of the country’s best-recruiting programs for much of the last two decades and has been trendsetter when it comes to expanding recruiting departments, the usage of design, utilizing of brands, etc. Still the Buckeyes spent less than $1 million on recruiting last year, putting them in the middle of the road for Big Ten schools, and placing them behind Michigan, Penn State, Nebraska and Minnesota and only about $125,000 more than Rutgers, Michigan State and others. In the next year-plus, don’t be surprised to see other Big Ten programs like Maryland and Illinois (one of just six Power 5 programs to see a decline in recruiting costs from 2013-2018) ramp their efforts back up.

In general, though, it’s not surprising that it’s the SEC dominating when it comes to money spent. The league’s public schools spent on average almost $400,000 more than the next closest league, the Big 12.

Elliot Donald wants to get back to Ohio State, just not during season

The Buckeyes offered Pittsburgh 2021 defensive tackle Elliot Donald back in January, but because he’s just a 2021 prospect, there’s been little time for getting to know him — despite a March visit to Columbus when he spent the day with the Ohio State coaching staff during its Student Appreciation practice. 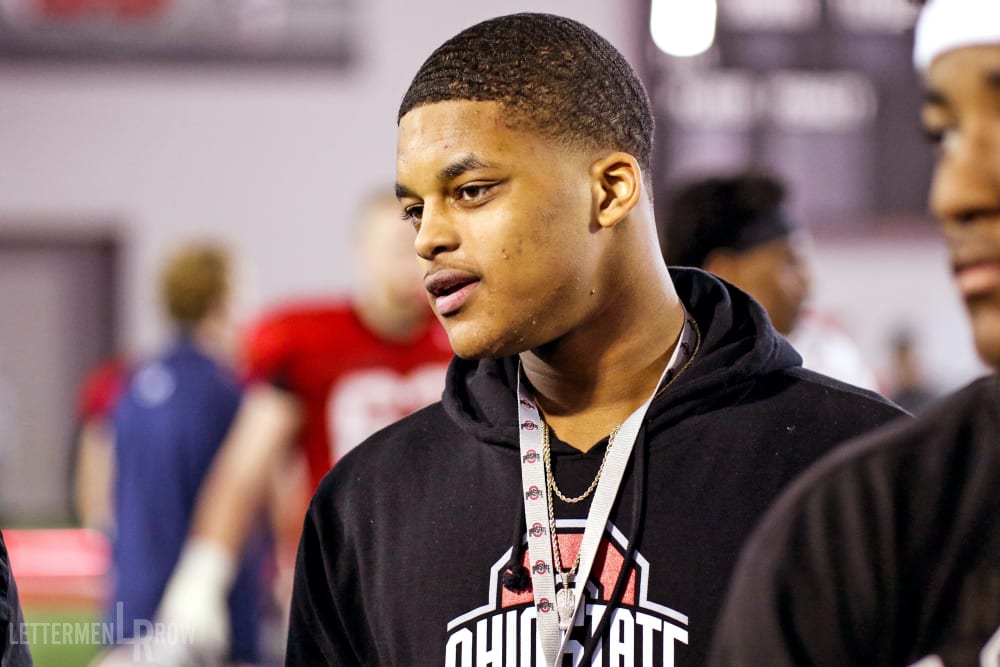 Ohio State has offered — and hosted — Elliot Donald and is continuing to get more familiar with him. (Birm/Lettermen Row)

Since that visit in March, Donald has stayed in limited contact with the Buckeyes.

“I’ve talked to [linebackers coach] Al Washington a few times,” Donald told Lettermen Row. “[Washington] is a cool coach. He was one of the first coaches that talked to me really early in my recruitment when he was at Michigan.”

The March visit was the appetizer for Donald’s recruitment with the Buckeyes, but his next trip will be the main course. When that happens is up in the air, but the country’s sixth-ranked strong-side defensive end is focusing more on his junior season right now than his recruitment.

“I probably won’t do it during the season,” Donald, the nephew of NFL All-Pro Aaron Donald, said. “My biggest focus right now is the season. All I want to do is be with my team, recover, watch film and improve every week. But I will definitely keep in touch and visit again. Ohio State is definitely a school I’m interested in.”

When Ohio State offered 2021 offensive tackle Cullen Montgomery in May, he told Lettermen Row that his interest in the program was stoked initially by the reviews of the school given to him by teammate and fellow 2021 offer Donovan Jackson. Jackson, the country’s eighth-ranked offensive tackle, has Ohio roots and has visited Columbus — and his view of it certainly influenced the 6-foot-5, 318-pound Montgomery.

“[The offer] means a lot,” Montgomery told Lettermen Row. “I definitely want to go visit. It’s like a dream offer. They came to Episcopal ([in the spring] and talked with my head coach then they offered. It was [offensive line coach Greg] Studrawa.”

Since that offer, the conversation has been limited. But with Sept. 1 approaching, Montgomery is eager to see that change.

“I can’t wait,” Montgomery said. “I want to get up there for a visit and a game. I like that Coach Stud is a hard, aggressive type of coach. That’s the kind of coach I need.”

Buckeyes don’t need to rush to recruit running back this year
Buckeyes in good spot with recruitment of Marvin Harrison Jr.
Advertisement