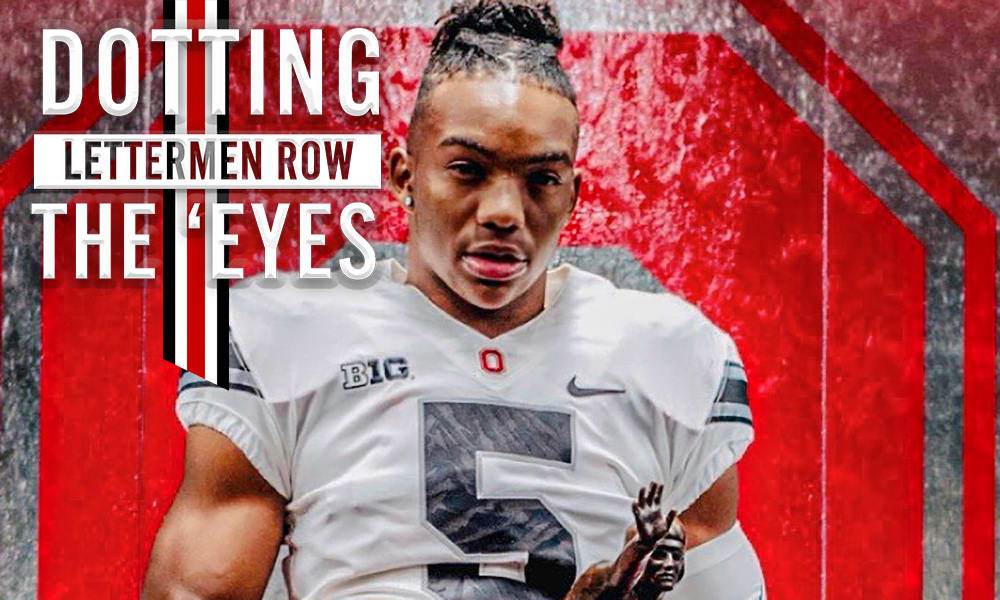 Bijan Robinson was all set to pick Ohio State, but things changed almost overnight in his recruitment. (Bijan Robinson/Courtesy)

Stay in touch or be left out because Ohio State recruiting is a 24-hour, seven-day-per-week obsession. What’s the latest news as the Buckeyes build for the future? Get that and more Sunday through Thursday on Lettermen Row. Thursday’s notebook has a final call on Bijan Robinson before his commitment is announced and news on a major 2021 talent who decommitted from Penn State.

Whether he picks Ohio State or not on Friday, the program would need to continue recruiting Tucson (Ariz.) Salpointe Catholic 5-star running back Bijan Robinson either way.

That’s just recruiting in 2019. No recruitment is ever really over until a prospect hits send on the Letter of Intent on signing day.

But that isn’t likely to decrease the sting the Ohio State coaching staff will feel on Friday when the country’s fourth-ranked running back announces his commitment to Texas, USC or Arizona instead of Ohio State. It’s been a wild swing of emotion for the Buckeyes, because as recently as last Saturday morning Robinson was set to pick them.

The Buckeyes have been given no real explanation for the change of heart from Robinson and his family. Even if they had been, it really doesn’t matter. The end result is what matters here, not the semantics that led up to it.

Whether it’s his grandparents who don’t want him to go so far away for school or whether it’s a sudden concern about the Buckeyes depth chart having more names on it than he envisioned a month ago is irrelevant.

What matters is that on Friday, Robinson won’t pick the Buckeyes. Ohio State will be forced to adjust its recruiting board at running back completely after feeling confident for the last month that they had two of their top targets locked up and committed.

Final Call: Not the Buckeyes

The search for replacements for the aforementioned Robinson and recent Florida State commitment Jaylan Knighton is already underway in Columbus. The first name that’s been added to the list is Lancaster (Texas) 4-star prospect Kevontre “Tre” Bradford.

Blessed to receive an offer from the Ohio State University #GoBucks⭕️ pic.twitter.com/yzwmpkiZXF

The country’s 18th-ranked tailback, Bradford averaged almost 10 yards per carry as a junior and scored 14 touchdowns for the Tigers. The offer from the Buckeyes is his 25th, and programs like Wisconsin, Baylor, Oklahoma State and USC are among the leaders in his recruitment according to analysts from that area.

The Buckeyes are just throwing their hat into the ring at this point. But it’s wise to expect Ohio State to begin evaluating tailbacks in every corner of the country as they look to sign two in 2020. Bradford will be a top name to monitor moving forward.

The country’s fourth-ranked 2021 wide receiver prospect, Baltimore’s Dont’e Thornton, announced on Thursday morning that he was decommitting from Penn State and reopening his recruitment.

Ohio State offered Thornton over the summer, and though he’s not yet been on campus, he’s one of a handful of receivers around the country who could immediately put himself into the Buckeyes top group of 2021 targets if he decides to grow his relationship with the coaching staff.

Since committing to the Nittany Lions in February, the 6-foot-4, 180-pound Thornton has made college visits to Penn State, West Virginia, Oregon and Tennessee. He clearly has made it a point to explore his options a bit longer and decided against doing that while claiming a commitment to any school.

The Buckeyes are one school to watch moving forward after extending an offer to the second-ranked prospect in the state of Maryland’s 2021 class. He, along with Emeka Egbuka, Beaux Collins, Marvin Harrison Jr. and Lorenzo Styles Jr. will all be in the upper-tier of targets for Brian Hartline and Ohio State.

On Wednesday, we introduced Brentwood (Tenn.) Academy offensive lineman Noah Josey, who visited Ohio State last Friday. He was accompanied by John Howse, his teammate with the Eagles.

Howse, a 6-foot-2, 185-pound athlete, told Lettermen Row that he has early offers from Kentucky and Penn State. Ohio State did not offer, but that didn’t stop the visit from impacting him and his opinion of the program.

“We were at Ohio State for almost the whole day [Friday],” Howse said. “It’s awesome there. There’s a great atmosphere and great people there. Ohio State has a different mindset than a lot of schools, because they go into games knowing that they’ve worked hard all week. I spent a good deal of time with the defensive backs coach, Jeff Hafley.

“He’s a great guy and an amazing coach. He really wants to make you better on and off the field, and he truly cares.”

Howse, whose mother is from Michigan, checked out the Wolverines following the Ohio State visit. He hopes to return to Columbus for a game this fall to keep getting a better look at the Buckeyes.

Earlier this week, the fine folks at MaxPreps.com announced their preseason All-American selections, and a handful of Ohio State commitments and targets were honored as one of the country’s best high school football players.

Both of the Buckeyes 5-star 2020 commitments were named First-Team All-Americans with receiver Julian Fleming and offensive tackle Paris Johnson earning the nods. Defensive back Clark Phillips was also selected, filling the all-purpose role because of his effectiveness as a receiver or a defensive back. LSU commitments Elias Ricks and Rakim Jarrett are first-teamers as well, with Tre Williams and Mekhail Sherman — Jarrett’s St. John’s College (Washington D.C.) teammates — earning the honor as well.

On the second team, Buckeyes commitment Gee Scott was selected at wide receiver, center Luke Wypler earned a spot and Cameron Martinez was picked as the all-purpose selection on offense. Cornerback Lejond Cavazos was named to the second team as well.

Also, on Wednesday, with the adjustments to the 247Sports.com composite rankings, Buckeyes verbal Jack Sawyer saw himself move into the top overall spot in the Class of 2021 rankings.