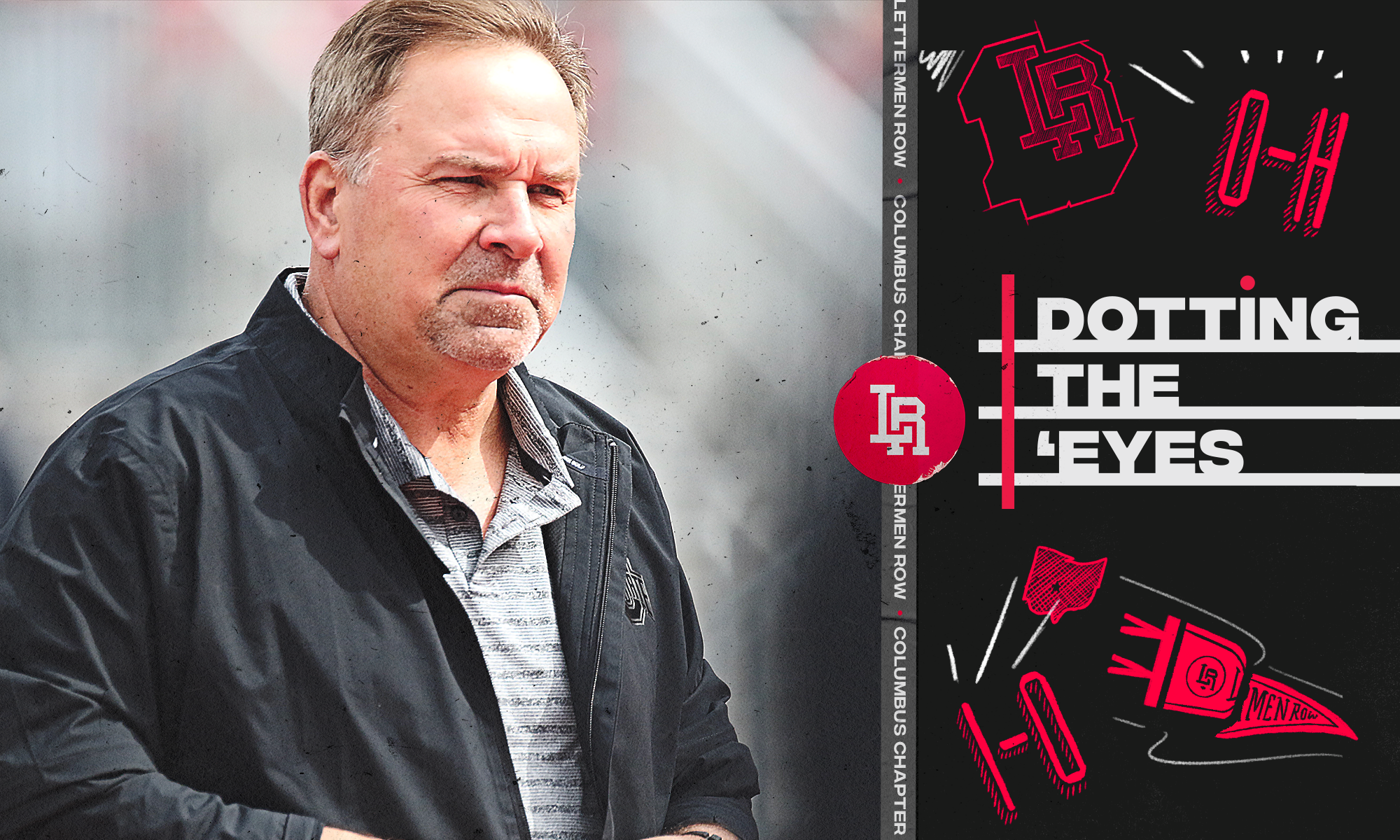 Kevin Wilson has worked to get Ohio State ahead in relationships in the Class of 2022. (Birm/Lettermen Row)

Stay in touch or be left out because Ohio State recruiting is a 24-hour, seven-day-per-week obsession. What’s the latest news as the Buckeyes build for the future? Get that and more Sunday through Thursday on Lettermen Row. Today’s notebook gives final thoughts ahead of Benji Gosnell’s decision and tries to get a read on the landscape of the recruitment of Derrick Davis.

Though Ohio State has one 2022 tight end already committed, the Buckeyes could be on the verge of adding a second on Wednesday night.

East Surry (Pilot Mountain, N.C.) High School 4-star prospect Benji Gosnell is announcing his college decision at 8 p.m. and will choose between Ohio State, Florida and North Carolina. He’s not been to Ohio State or Florida at this point, but he has spent a lot of time on campus at North Carolina where his brother Stephen is a freshman wide receiver.

The Buckeyes made the 6-foot-4, 225-pound athlete, who also plays linebacker, a major priority dating back to March. His head coach, Trent Lowman, is very familiar with Kevin Wilson and that’s helped Ohio State early.

“Me and Coach Wilson have built a great relationship, and their coaching staff is awesome — he’s a real, well-rounded, genuine guy,” Gosnell told Lettermen Row earlier this year. “He knows his stuff about tight ends and the offense, and he produces the tight end really well. Ohio State uses the tight end more than anyone in the country, but a lot of the talks me and him have are mainly just talks about everyday life. Talks like regular friends would have.”

Not being able to visit Columbus has been a problem. But the strength of the relationship with Wilson, Ryan Day and tight end commitment Bennett Christian has helped the Buckeyes more than the lack of a visit has hurt them.

And despite suggesting he was going to need a bit more time to make a decision when he joined Birminology three weeks ago, it seems the problems being faced by the 2022 class have made him adjust his plans. Certainly there’s a family pull to stay close to home, but according to Lowman, the decision is being made solely by Gosnell himself.

What is the call? I think the big picture about tight end development in Columbus, not just the receptions or passes thrown to them, will tell the tale. Expect Gosnell to land on Ohio State when he announces his choice.

There’s another big commitment coming this week, but not until Saturday. That’s the announcement from Monroeville (Pa.) Gateway 4-star safety Derrick Davis, who will be picking his future home that afternoon.

This has long been thought to be an Ohio State and Penn State battle. But the country’s No. 2-ranked safety did make a weekend visit to LSU, and the Tigers are hoping to pull off the major upset based on the strength of that trip.

Baton Rouge is a pretty cool place and LSU is a big-time program. But barring something exceptionally bizarre, it’s hard to see any way that the Buckeyes and Nittany Lions aren’t the the final pair when it comes to Davis and his choice.

In speaking to sources about the recruitment and Derrick Davis, Sr., there’s only one consensus right now: Everyone agrees that no one knows what the 6-foot-1, 195-pound athlete is going to do.

There’s a few missing data points here in the Davis recruitment. The biggest one of those for the Buckeyes is how he feels about the sheer number of defensive backs in the Ohio State recruiting class and whether or not the coaching staff can convince him that his talent, versatility and upside is unlike anything else they have on the current roster. Davis made the trip to Ohio State two weekends ago to visit with Buckeyes commitments, and that was vital for the folks in Columbus.

The Buckeyes continue to push for Arizona 2022 wide receiver commitment Kyion Grayes. Ohio State offered the 3-star prospect a little over two weeks ago, and he’s remained in regular contact with Brian Hartline. But he’s also started hearing from someone else: Captain Buckeye, C.J. Hicks.

“C.J. Hicks is my guy,” Grayes told Lettermen Row. “He’s gonna be on campus when I get out there along with a few ’22 guys. They were just so welcoming and it just felt right.”

Grayes is also paying close attention to all the rumblings around the Buckeyes 2022 class and is especially interested in what happens with top-ranked quarterback Quinn Ewers.

“I honestly think [Ewers] will be a Buckeye by the time it comes to signing day,” Grayes said. “He’s just a phenomenal player, and if I got the chance to play with him that would be crazy.”

The Chandler (Ariz.) standout intends to make a trip to Ohio State as soon as the NCAA dead period ceases.

The offer is No. 23 for Abor, who plays at Duncanville (Texas) High School. He’s a 6-foot-4, 240-pound prospect and has been in very regular contact with Ohio State in the last few weeks leading up to Tuesday night’s offer.