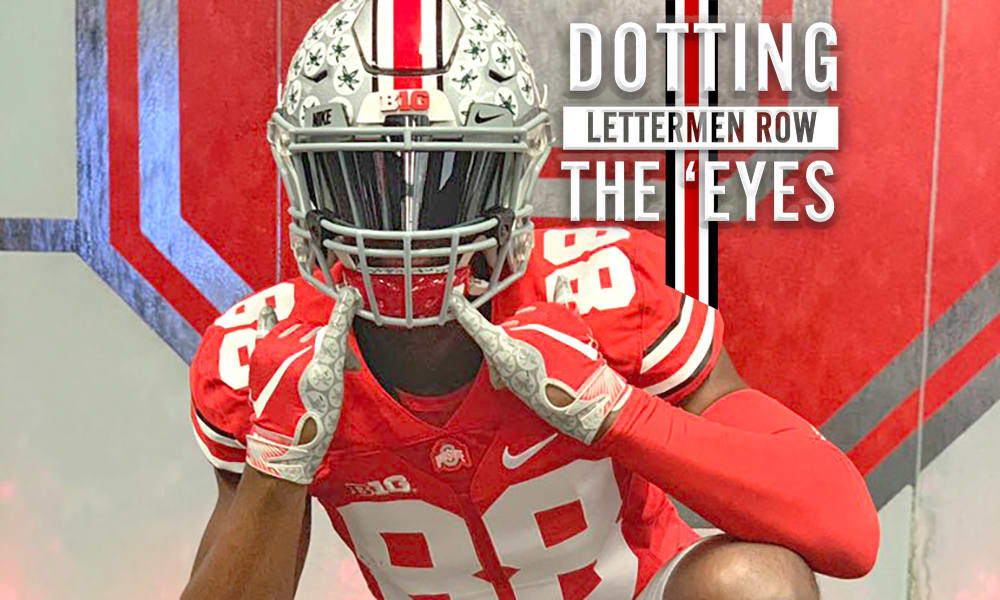 Stay in touch or be left out because Ohio State recruiting is a 24-hour, seven-day-per-week obsession. What’s the latest news as the Buckeyes build for the future? Get that and more Sunday through Thursday on Lettermen Row. Today’s notebook talks about some of the country’s best 2021 prospects including 5-star receiver Beaux Collins.

As the national recruiting rankings were adjusted this week, St. John Bosco (Bellflower, Calif.) 2021 receiver Beaux Collins saw himself elevated to near 5-star status in the composite rankings, cementing his place as one of the country’s elite rising-junior prospects.

That’s why the 6-foot-3, 195-pound wideout is so coveted by Ohio State, Clemson and others. He’s visited Columbus twice, his sister goes to school in Ohio and he has continued to develop his relationship with Brian Hartline and the Buckeyes when he’s had the chance.

“I talk to Coach Hart every now and then,” Collins told Lettermen Row. “We are building a great relationship. He’s been giving me a lot of pointers that I can use now as a player.

“I can tell he really cares about helping me become a complete receiver, and he’s a great guy off the field more than anything else.”

The Buckeyes are in a position to receive another visit from Collins this season.

“Yes, most definitely,” Collins said. “I want to go to their game against Penn State.”

Collins also hopes to make a trip to Texas and Alabama during this upcoming season.

The Buckeyes have tried in each of the last two recruiting cycles to recruit the best defensive lineman from the Blair Academy in New Jersey and fallen short both times, losing out on Jayson Oweh (2018, Penn State) and David Ojabu (2019, Michigan).

Will the third time be the charm? That’s the hope, and that’s why Ohio State hosted Aaron Armitage and his family last Friday. The trip was a one-day visit, arranged to take place before the family headed to Michigan for the BBQ at the Big House on Saturday.

“We toured the campus and spent some time with most of the coaching staff,” the 6-foot-4, 245-pound 2021 prospect told Lettermen Row. “It went great.

“I got to talk to Larry Johnson, Ryan Day, Jeff Hafley, and Greg Mattison. I was on campus for just the day on Friday, but the facilities and the brotherhood that school has is what stood out the most.”

Armitage was able to sit with Johnson and take a look at his film, but he was hoping to spend more time with the legendary line coach.

“I wish I could have worked with Coach Johnson on the field,” he said. “Maybe do some one-on-one training, so that would be pretty cool in the future. We watched tape with my parents and he made a slideshow to show me all the facts about how many guys they’ve sent to the NFL and how you will succeed if you finish playing football in the university.

“He has a lot of passion towards the game and his players and he showed it to me. It was very impactful.”

Offensive lineman Noah Josey, a 6-foot-5, 280-pound guard from the Brentwood (Tenn.) Academy, was offered by Ohio State over the weekend.

After a amazing visit, I’m truly blessed to say I have received an offer from THE Ohio State University @OhioStateFB @theBAFootball @Rbcoachdgraham pic.twitter.com/tlT92VVZbb

Tennessee’s ninth-ranked 2021 prospect, Josey was offered during his visit.

“Ohio State was a great place that had great facilities and an even better coaching staff,” Josey told Lettermen Row. “I spent a lot of time with [running backs coach] Tony Alford and [offensive line coach] Greg Studrawa. I also got to meet with [Ryan] Day.”

Josey made the trip with a few of his teammates. It was his first visit to Ohio State, but he has some family ties to the area.

“My dad has family in Columbus,” he said. “My dad, my uncles and my cousins are big Buckeyes fans.”

Alabama, Georgia, LSU, Michigan and others have already offered the rising-junior offensive lineman.