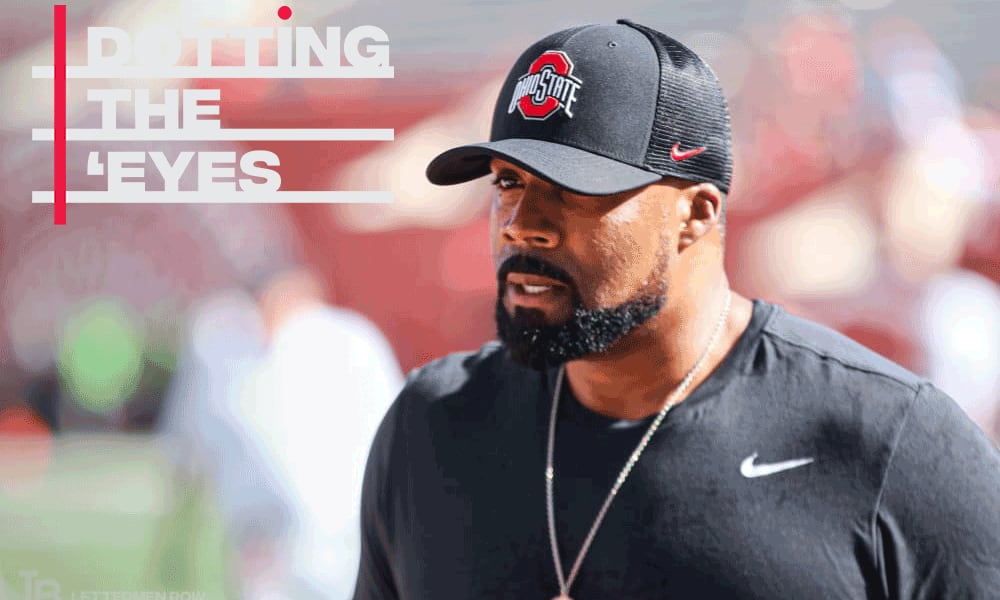 Stay in touch or be left out because Ohio State recruiting is a 24-hour, seven-day-per-week obsession. What’s the latest news as the Buckeyes build for the future? Get that and more Sunday through Thursday on Lettermen Row. Today’s notebook catches up with a pair of Southern stars who visited Ohio State during last weekend’s visit game Maryland.

The country’s eighth-ranked 2021 outside linebacker made his first trip to Ohio from Suwanee (Ga.) last weekend.

North Gwinnett’s Barrett Carter, Georgia’s No. 12-ranked junior prospect, called the visit to Columbus an eye-opening experience in his recruitment.

“The whole time I was there, I was blown away,” Carter told Lettermen Row. “The biggest ‘wow’ moment was probably going into the locker room after the game and meeting all the players.

“It was very important [to visit] because I’d been just visiting schools that are close to me. So, to get back up north — I’m originally from Chicago — and see the campus was definitely amazing to do.”

The 6-foot-1, 210-pound Carter is being recruited by linebackers coach Al Washington, who sees him filling the Bullet position in the Ohio State defense. Carter and Washington are in regular contact.

“They want me to play their Bullet position, to be a player on the defense who stays on the field and does it all — covers, blitzes, plays in the box, just does everything on defense,” Carter said. “I’m all for that, because that’s what I’ve been doing my whole life.

“Al Washington and I talk a few times a week, and he makes me truly feel like I’m a priority for them. It was a great trip because I got to sit down with him and Rya Day both and chop it up. That meant a lot.”

One of Carter’s good friends and high school teammates is Jordan Hancock, a 3-star cornerback prospect who was at Ohio State two weeks ago and also has an offer from the program. That duo has discussed the possibility of staying teammates in the future.

“Jordan is like my brother from another mother,” Carter joked. “We both really like Ohio State and we always discuss balling in college together. Both of us being on that Ohio State defense would be something special.”

The Buckeyes are in line for another visit from Carter, but that date isn’t set. He’s trying to take his recruitment slow at the moment and focus on one weekend at a time.

“I will most likely be at Auburn this weekend for the Georgia game and if I can make it back up to Columbus this season I definitely will,” Carter said. “But this past weekend’s visit to Ohio State definitely won’t be the last.

“I’m just taking it day by day and whenever I’m ready, then I’ll commit. That’s not any time soon, though.”

“The visit was extravagant,” Turner told Lettermen Row. “Everything was perfect. I feel like that’s a place where I could thrive as a player and a student.”

Though Ohio State has not offered the 6-foot-3, 225-pound junior, a number of big-time programs have — including LSU, Florida, Oregon, Florida State and Minnesota. The Buckeyes are waiting to see a bit more of Florida’s No. 28-ranked 2021 prospect, who they’ve only recently begun communicating with as the process heats up. While he primarily plays linebacker now, they believe he can be a defensive lineman at the next level.

“They started reaching out about two weeks after college coaches were able to text me,” Turner said. “[Ohio State defensive line coach Larry] Johnson said he wanted to come and see me play in person before really talking about a possible offer. They’re recruiting me as a defensive end because of the defensive scheme they run.”

It’s been a few years since the Buckeyes plucked a prospect from American Heritage — Torrance Gibson was the last one back in the Class of 2015 — but Turner doesn’t seem to be too concerned about the challenges of leaving home for college.

“It wouldn’t matter how far away I go, as long as I know I’m going to a prestigious university that will better me as a player and person,” he said. “If it’s someplace that will help me reach the next level, I wouldn’t care how far away I am.”

Sticking with Buckeyes visitors from the 73-14 win over Maryland, it’s time to introduce North Hardin (Radcliff, Ky.) 2021 defensive back Jordan Lovett, who also made the drive to Columbus for his first experience in Ohio Stadium.

Lovett, a 6-foot-2, 195-pound safety, has been hearing from defensive backs coach Matt Barnes for a few weeks and didn’t waste any time getting himself in front of the Buckeyes.

“They contacted me Oct. 15, so I would say it’s been a little less than a month,” Lovett told Lettermen Row. “Matt Barnes was the first one to contact me. He saw my film and invited to the Maryland game, and from there on I met some of the coaching staff.

“I had a great visit. I thought the facility was massive and I liked how they are a brotherhood about every obstacle they face. They know how to handle adversity.”

Lovett has early offers from Cincinnati, Tennessee and Ball State, but he’s hearing from a few other programs as they begin to evaluate his junior season. The Ohio State coaches are encouraging him to continue growing and no doubt hope to see him on campus next summer for some of their own, in-person evaluation.

“I had great conversations with the staff before and after the game,” he said. “The coaching staff kept telling me to keep on doing what I am doing and keep up the good work.”

The Buckeyes are one of eight early favorites for Maryland star defensive lineman Monkell Goodwine.

Goodwine, a 6-foot-4, 265-pound strongside end at National Christian Academy in Fort Washington, is the country’s eighth-ranked prospect at his position and the No. 4-ranked player in Maryland. He holds 24 early offers, including one from Ohio State. But he has not yet made a trip to Columbus since earning that offer last January.