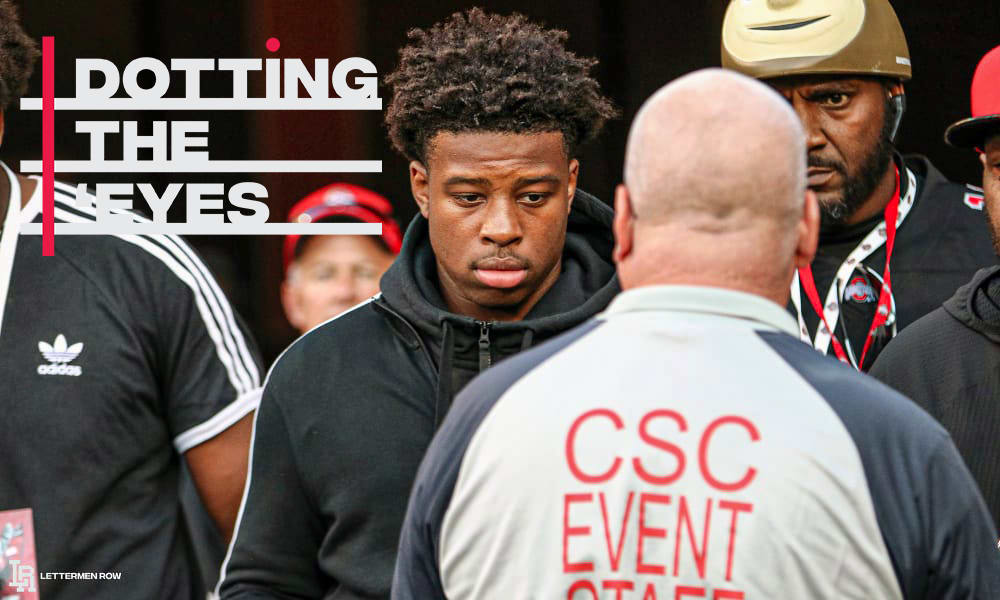 Jaylen Johnson decided against a long wait for his commitment as originally planned. (Birm/Lettermen Row)

Stay in touch or be left out because Ohio State recruiting is a 24-hour, seven-day-per-week obsession. What’s the latest news as the Buckeyes build for the future? Get that and more Sunday through Thursday on Lettermen Row. On Thursday, we take a closer look at the two latest Ohio State commitments, introduce a fast-rising 2021 tight end and more.

It was a pretty good 24-hour stretch for Ohio State from Tuesday to Wednesday afternoon.

On Tuesday, Jaylen Johnson became commitment No. 8 for the Buckeyes in their 2021 recruiting class. And just about 24 hours later, offensive lineman Donovan Jackson joined him in the committed column.

Johnson, the state of Ohio’s No. 11-ranked prospect, was offered by Ohio State in June following a one-day camp performance that impressed Al Washington and the defensive staff.

When that offer for Johnson came, it was pretty widely assumed that he’d eventually end up committing to Ohio State, so subsequently a lot of the potential offers he could’ve earned didn’t come his way. When he joined Lettermen Row as a guest on Birminology three months ago, Johnson was clear that he still intended to let his recruitment percolate a bit in an attempt to see what opportunities could still come his way.

The reasoning behind that was solid: See what’s out there while knowing that Ohio State was going to be there whenever he was ready to decide.

That kind of approach does have a potential snag, though. If he waits too long, the spot a recruit expects will be held for him may not be there.

According to people close to the situation, that is the primary reason Johnson moved up his decision timeline. He knew all along that Ohio State was the eventual choice, but the longer the recruiting game was played, the more likely it was that the program would have added someone in his place.

When push came to shove, Ohio State was ready to add Johnson — and did so as a result of a few things. First, the Buckeyes staff loved the way he came to camp last June and competed hard, showing them what he could do in a tense environment. Second, Johnson is a winner from a top-notch, in-state program, and that pedigree is important for Ryan Day and his staff.

The in-state component was big. But just as important was the opinion of high school coaches who had to play against Johnson. Ultimately, Lettermen Row was told that is what proved to be the final piece of the decision for Ohio State. Johnson received rave reviews from those who had to scheme against him, and the input from those coaches went a long way with the Buckeyes.

The Buckeyes 2021 class is currently ranked as the country’s best, and the recent release of the MaxPreps.com Junior All-American team helps provide a little insight into why.

The list is full of current Ohio State commitments and high-level targets for the program.

Here’s who made the first team, including Steilacoom (Wash.) 5-star prospect Emeka Egbuka, who was named the Player of the Year from the Class of 2021.

The familiar names don’t stop when the second team starts, either. The Buckeyes are chasing the best of the best in the country, and this list proves it.

Ohio State recently received a commitment from 2021 tight end Colorado’s Sam Hart. But the plan for the Buckeyes is to take two in the next recruiting cycle, so there will be no shortage of new names that emerge in the next few months.

One player that has not yet been contacted by Ohio State but would like to is Council Bluffs (Iowa) Lewis Central High School standout Thomas Fidone.

The country’s No. 10-ranked tight end, Fidone has almost 20 early offers. But his performance at the All-American Game Underclassmen Combine in San Antonio last week could raise his national profile.

“I was named the No. 1 tight end at the camp by all of the 247Sports.com analysts and the Rivals.com analysts as well,” Fidone told Lettermen Row. “I maxed out the vertical bar, so they wouldn’t let me go anymore. I ran a 4.67 and a 4.71 in the 40-yard dash and was on the All-Combine team.”

As mentioned, the Buckeyes are not one of the programs recruiting Fidone yet. They have captured his attention over the last few years, though.

“I think they are using there tight ends well,” Fidone said. “Using the tight end is something that’s sort of new to them, but it seems that they are going to start to use more, like a lot of other teams. I can also play receiver, which I think helps me.

“I love the way they play, though. [Ohio State] is a huge Power 5 school, and being in the Big Ten I grew up watching them.”

A 6-foot-5, 218-pound tight end, Fidone could quickly become a national name. He’s hoping to have a decision made before his senior season, so if there’s going to be interest, it’d behoove the Buckeyes to get involved soon.

“I’ll start to narrow down sometime in the near future,” Fidone said, suggesting that a July decision would be his ideal timeline. “I probably won’t take all five official visits but it’s a possibility.”

One of the names on the MaxPreps.com list starting to make a move with the Buckeyes is Cy-Fair (Texas) product L.J. Johnson Jr.

On Wednesday night, Johnson became the ninth 2021 running back to earn an Ohio State offer.

EXTREMELY BLESSED TO HAVE RECEIVED AN OFFER FROM THE OHIO STATE UNIVERSITY! #GoBucks🔴⚪️ pic.twitter.com/OE1tq01cus

The country’s No. 4-ranked junior tailback, Johnson is a 5-foot-10, 205-pound prospect who has an impressive list of almost 25 scholarship offers already. That list includes Alabama, Georgia, LSU, Florida, Oklahoma, Texas and many others.

For Ohio State, it’s business as usual in defensive back recruiting
Ryan Day answered doubts, set course for Buckeyes future in Year One