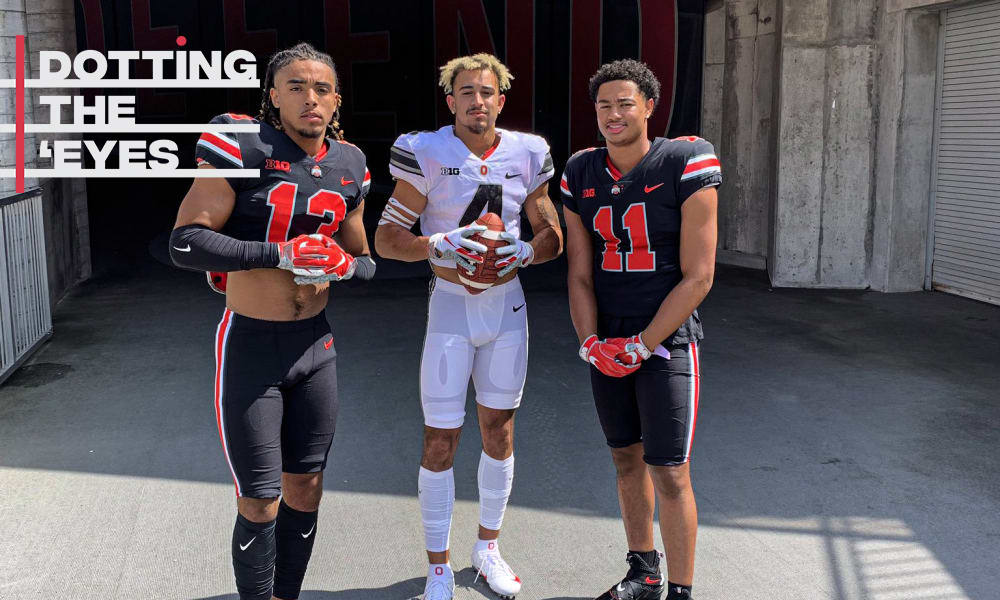 Ohio State will host a number of its top committed prospects for the game against Michigan State. (Jaxon Smith-Njigba/Twitter)

Stay in touch or be left out because Ohio State recruiting is a 24-hour, seven-day-per-week obsession. What’s the latest news as the Buckeyes build for the future? Get that and more Sunday through Thursday on Lettermen Row. Tuesday’s notebook talks with Georgia running back Jahmyr Gibbs and previews a major recruiting weekend for Ohio State.

We’ve spent some time here at Lettermen Row talking about the 2020 running back situation, haven’t we?

Well, we’re not done, and may not be for a while. But there will certainly be some clarification on where things stand in the next month or so.

That begins this weekend as the Buckeyes prepare to host Lancaster (Texas) running back Tre Bradford for his official visit. It’s also possible that Miyan Williams could pop up on campus at any time in the near future, and that would instantly add more intrigue to the already intriguing situation.

Then there’s Georgia standout Jahmyr Gibbs, who continues to draw the attention of big-time programs for the work he’s doing this season at Dalton High School. Ohio State remains very interested in the 5-foot-11, 195-pound tailback. And the Buckeyes and Florida are working the hardest to secure a flip from the current Georgia Tech commitment.

That game against Maryland is set for Nov. 9, and that means there could be five more weeks to figure out if it’s Gibbs, Williams, Tre Bradford or someone else at the top of the running back board for Ohio State.

The first of what could be three huge recruiting weekends for Ohio State during the football season is rapidly coming into shape.

While the totality of the visitor’s list is still in the works, one thing is clear: It’s going to be a relationship-building weekend for the Class of 2020 at Ohio State. Last week we mentioned that cornerback Lejond Cavazos was going to be in town and that 5-star wide receiver commitment Julian Fleming would be doing the same, but the list of Buckeyes verbals coming to town is rapidly growing.

Jaxon Smith-Njigba is expected to make his way back to Columbus this weekend, and it’s been confirmed by Lettermen Row that Gee Scott will also be coming into town as treks from Washington. Talented two-way prospect Cameron Martinez will be there, as will offensive lineman Grant Toutant. It’s expected that every 2020 offensive line commitment will join him with the exception of Luke Wypler, who has a game on Saturday afternoon. The rest of the Ohio-native commitments, including guys like Paris Johnson and Jakob James, are likely going to show up at the primetime Big Ten battle as well.

In the Class of 2021, quarterback Kyle McCord will head over to Ohio from Philadelphia. And, of course, 5-star defensive Jack Sawyer will be at the game like he is every week. Jayden Ballard and Ben Christman showing up would not be a surprise, either.

Aside from just getting closer within their respective classes, these big-game weekends are a great chance for the Buckeyes to make a good impression on other recruits making their way to town. The tight-knit nature of the 2020 class is sure to have a big impact on official visitors Tre Bradford and 4-star defensive end Tyler Baron.

The reach of Ohio State football is far and wide, and that means sometimes kids who have no reason to love the Buckeyes still do.

That’s the case with New Jersey 2022 wide receiver prospect Amari Clark. The Woodrow Wilson (Camden, N.J.) sophomore has eight early offers, including one from Florida. But landing an offer from Ohio State would be a recruitment-altering event for him.

“Hopefully I get that [Ohio State] offer soon,” Clark, a 6-foot-1, 185-pound athlete, told Lettermen Row Tuesday morning. “I was young and I always watched TP, Terrelle Pryor, he’s my favorite Buckeye of all-time. A couple years after that Zeke [Elliott] came along, then it’s J.T. Barrett, Marshon Lattimore and Cardale Jones coming in and took us to the championship.

It’s rare to see a recruit use the word “us” when discussing a school of interest, and it’s likely that as time moves along Clark’s tenor will change a bit. But for now, the talented sophomore is enamored with Ohio State.

“I’m the only person in my family that likes Ohio State, and I don’t know anyone that has gone there,” he said. “I mean, I just love the offense and the play-calling by Ryan Day. I like the offense, how Justin Fields is running and throwing. I mean, that’s my dream school. To have that offer? I’d love to have that offer.”

There has been some communication in the past between Ohio State and Clark, but it was very minimal.

“I forget the coach, and he may be gone, but they were at my school last year,” Clark said. “He wanted me to come up on a visit, but I haven’t heard from them since.”

Of course, the Buckeyes can’t contact Clark directly at this point. But as a prospect who is potentially the top player in New Jersey’s 2022 class, it won’t be surprising if the Ohio State coaches keep tabs on him moving forward.