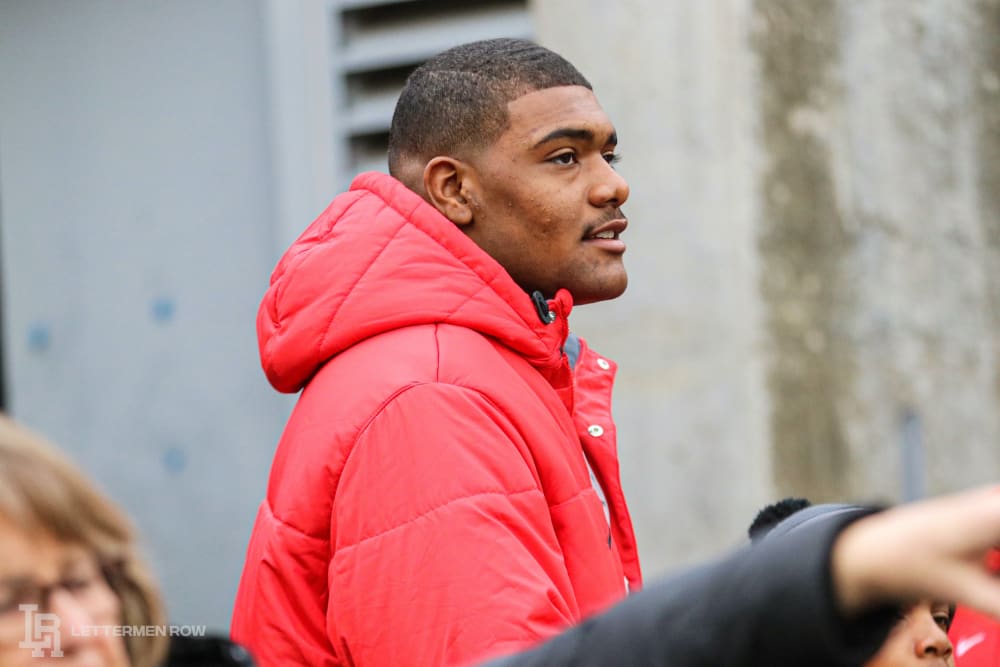 Xavier Carlton has consistently been a top target for Ohio State for some time. (Birm/Lettermen Row)

COLUMBUS — The early signing period for Ohio State is now five days away.

When Ryan Day and the Buckeyes assistant coaches wake up on Wednesday, they’ll have a pretty good idea of which of high school football’s best prospects are signing on the dotted line to officially join their program.

As of now, there are 25 players committed to Ohio State. Because kicker Jake Seibert is taking a grayshirt season, that means 24 new scholarship Buckeyes are expected to join the program next week. Ohio State will certainly be waiting for a decision from quarterback C.J. Stroud with bated breath as the 4-star quarterback is expected to announce his college choice sometime between his weekend visit and next Friday.

But there are some unknowns remaining in the Buckeyes recruiting realm. And there are options that remain for Ohio State beyond the current crop of commitments and Stroud. Next week may bring the beginning and end of the early signing period, but it doesn’t necessarily bring an end to the intrigue that surrounds the 2020 Ohio State recruiting cycle.

Which other players could still land with the Buckeyes by the time the February signing period arrives? Lettermen Row is diving into the options.

Of all the potential additions out there for Ohio State, quarterback Jayden de Laura is the one who would come at a cost for the Buckeyes. Why? Well, adding de Laura almost assuredly means that Ohio State swung and missed on C.J. Stroud.

A Washington State commitment, de Laura does have an Ohio State offer and has talked about visiting the school, but to this point it’s not happened. Because de Laura is waiting until February to sign his Letter of Intent, there’s at least a chance for Ohio State to get back in the mix in his recruitment if things fall through with Stroud.

Are there running backs who could still end up at Ohio State?

I think it seems pretty clear at this point that Ohio State is entering the early signing period content with one running back in its Class of 2020.

That running back is Winton Woods (Cincinnati) High School’s Miyan Williams. And though his 3-star ranking isn’t something that will excite star-chasers out there, he’s a young prospect the Buckeyes are high on and have been for a while now.

For the majority of the 2020 cycle, the goal was to sign two running backs. So it stands to reason, even with a relatively full class and increasing confidence in the returning ballcarriers, that there could still be interest in a few others at tailback around the country if it’s a player who is a good fit schematically and personality-wise.

One of those players is Dalton (Ga.) 4-star Georgia Tech commitment Jahmyr Gibbs. The country’s No. 16-ranked tailback visited Ohio State in early November and has an official visit scheduled for the weekend of Jan. 17, so it’s obvious the two sides have some remaining interest in one another. The question is how much interest does Gibbs have in leaving the south, and the answer to that question hasn’t provided much optimism for the Buckeyes to this juncture.

The other potential running back? Well, this one seems a bit more far-fetched than Gibbs.

As long as Bijan Robinson isn’t signed with Texas, then there’s at least a small ray of hope for Ohio State — but right now it’s just barely a sliver of light. So small are the odds against the Buckeyes that neither Ryan Day nor any other assistant made an in-home visit with Robinson this week, despite being right down the street when checked in on his teammate and friend, Ohio State commit Lathan Ransom.

But what if all the turmoil at Texas gives Robinson pause about signing next week?

The 5-star running back isn’t enrolling early, so there’s no hurry to put pen to paper. That’s especially true as questions about whether or not Tim Beck and Stan Drayton, his primary recruiters, will still be on Tom Herman’s staff next season.

Sometimes all that is needed for a crazy February flip to happen is a little crack to appear in a relationship’s foundation. That crack has been there for a while with Robinson and Texas. But can it get blown open in the next six weeks? If he doesn’t sign next week, I think it could.

We already addressed the possibilities on the defensive line for Ohio State as the 2020 recruiting cycle comes to an end, so I won’t dive too deep here. But certainly there’s a chance the Buckeyes could add someone at this spot.

Tyler Baron and Xavier Carlton, a pair of 4-star defensive ends from Tennessee and Utah respectively, remain in play for Ohio State. The need for an additional defensive line prospect faded as Jonathon Cooper announced his return for 2020 and with the position change of Cade Stover. But Larry Johnson isn’t ever going to turn down talent that he wants — and both Baron and Carlton fit that description.

Baron is deciding next week and is more likely to pick Tennessee or Kentucky over Ohio State, so don’t count on him ending up with the Buckeyes. The odds aren’t great when it comes to landing Carlton either. But like de Laura and Gibbs, there’s no decision coming until February, so there’s more time for Johnson to work his magic. Expect him and Ryan Day to make a trip west in January to try and bring the 6-foot-7, 245-pound lineman to Columbus for the next four years.