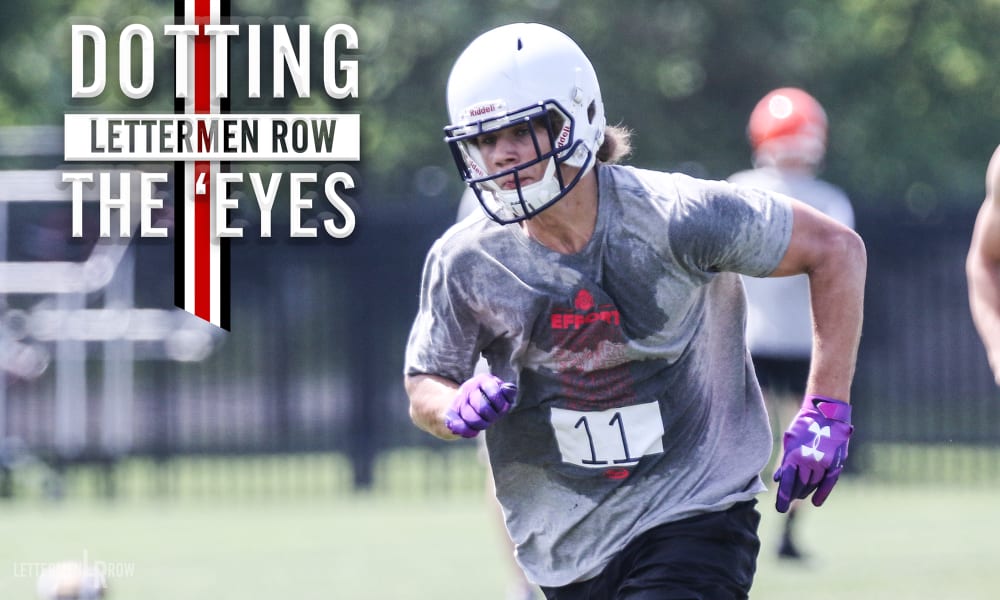 Stay in touch or be left out because Ohio State recruiting is a 24-hour, seven-day-per-week obsession. What’s the latest news as the Buckeyes build for the future? Get that and more Sunday through Thursday on Lettermen Row. Today’s notebook has updates on Joe Royer and a 2022 quarterback that impressed Ohio State during its one-day camp last week.

“I am taking my official visit to Ohio State on the weekend of June 21,” Royer told Lettermen Row on Monday. “It is the first official visit I have set up as of now.”

For the Buckeyes, the big question is whether or not they can make next weekend’s visit Royer’s only official visit. Ohio State wants two tight ends in the Class of 2020, and Royer will make that visit alongside another top target at the position, Cam Large, from Dedham, Mass.

Last weekend Royer visited Michigan with another tight end, Matthew Hibner. The trip, which Royer said went “well,” ended with Hibner committed. The Wolverines and reportedly shutting down their tight end recruiting in 2020, so who knows what that means for their efforts in recruiting the 6-foot-5, 225-pound Ohio athlete.

So what happens now? Expect Royer to narrow his schools list soon as he works toward a college decision.

The fun thing about camp season is getting to learn about new names from around the country and seeing how the Ohio State coaching staff works with each young player they evaluate. It’s pretty amazing to observe the attention to detail given to each prospect as they teach, train and talk with an aim to improve the kid’s game and their own relationships with the recruit.

Last week, the Buckeyes held their first one-day camp of the summer with four other camp days coming this week. One of the top quarterbacks in attendance was Henderson (Nev.) 2022 standout Katin Houser, who ventured east on the first leg of what’s going to be a lengthy summer tour.

“When I left Ohio State, we immediately flew to Arizona State and threw for the offensive coordinator,” Houser told Lettermen Row. “We are trying to schedule a visit to Iowa State and throw for Coach Joel Gordon, the quarterbacks coach. I have a throwing session with UC-Davis. … Kansas would also like for me to throw as well, if I throw for Kansas State.

“Right now I am getting prepared for a throwing session at the University of Washington. I will be throwing with Washington commits Ethan Garbers and Sam Huard. Washington has been out to the school to see me throw twice.”

Welcome to the insane life of a young quarterback working for more offers, right? A 6-foot-1, 175-pound quarterback, Houser has an early offer from Hawaii, and he’ll make that trip this season with his team at Liberty High School as they log thousands of miles and square up against a handful of the country’s best teams — including nearby Bishop Gorman High School in Las Vegas, St. John Bosco and Corona Centennial in California, Chandler High School in Arizona and more. It’s all a part of the process for Houser, who is taking the business of being a quarterback very seriously. He travels to Los Angeles twice a month to work with one of the country’s best young private quarterback coaches to hone his talents.

“Twice a month I travel to California to train with Danny Hernandez,” Houser said. “He trains top quarterbacks like DJ Uiagalelei, Bryce Young, Maalik Murphy. Me and Maalik are two of a few sophomores attending QB Collective Camp in July.”

Had a great time at the Ohio State Football camp! Thank you to all the coaches for the opportunity to come out to work and get better. #GoBucks @ryandaytime @Coach_Yurcich @OSUCoachKDub @CoreyDennis_ @CoachDanny10 pic.twitter.com/kkNR9Y4l38

But first, among all that travel, was Ohio State. The Buckeyes left a big impression on Houser, who expects to land somewhere around 6-foot-4 inches by the time he’s finished with a growth spurt that has seen him become seven inches taller in the last year.

“I thought the camp went really well, and I thought I competed well with the other quarterbacks,” he said. “I learned a lot from [Ryan] Day and [quarterbacks coach Mike] Yurcich. I appreciated the feedback that I received from them and I learned a lot about the love and support that the city has for the program.

“I love Ohio State, it is definitely a college town and the people are very passionate about Ohio State football. Living in the desert, I love the fact that it’s green over there and I was blown away by the stadium and the facilities. The campus is beautiful and the school pertains to my interests. I could 100 percent see myself being a student-athlete at Ohio State. The most important thing for me is academics. As a 4.0 student, having the opportunity to go to a strong academic school is critical.”

It didn’t take long for Mahlman, the country’s 20th-ranked tackle in his class and Minnesota’s No. 1-ranked player, to make a visit to Columbus. He showed up and camped for the Buckeyes last week.

“It was an amazing experience,” Mahlman said. “I would definitely love to come back. I was really impressed with everything. I thought it was great. I got to learn about the culture. Then I went around and saw a little bit of the campus and we sat down with Ryan Day before the camp.”

With offers from Nebraska, Iowa, Michigan State, Minnesota, Northwestern and Ohio State already, Mahlman is on his way to being one of the region’s top 2021 talents. Players don’t become that type of prospect without the ability to objectively evaluate their work. He was happy with his performance in Columbus but isn’t satisfied.

“I thought [the workout] went all right,” he said. “But there is always room for improvement. [Offensive line coach Greg] Studrawa said he liked the path I am on and that he liked my athleticism and flexibility. He told me to keep up what I was doing.”