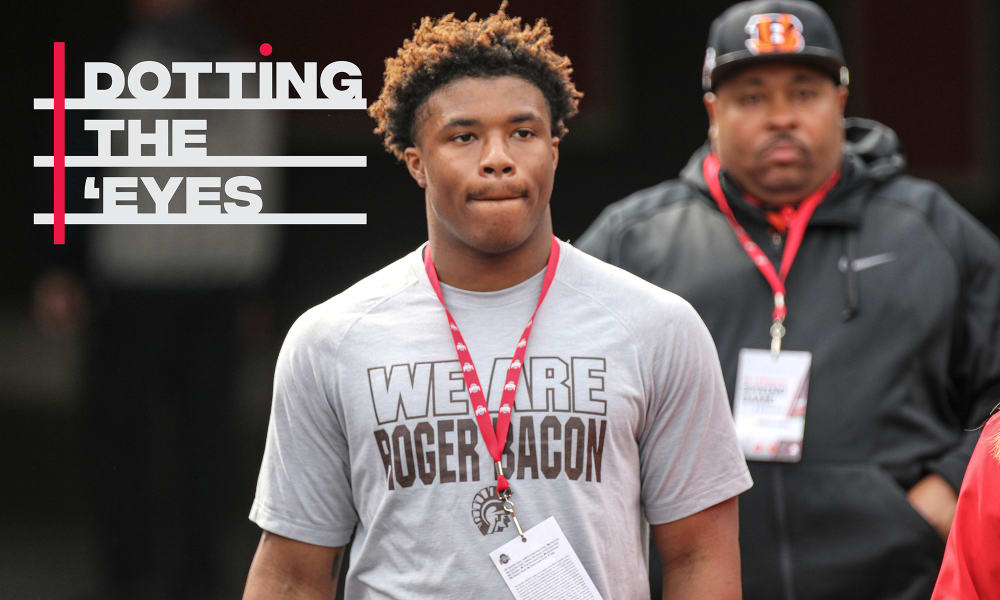 Ohio State will host Corey Kiner as the Buckeyes take on Cincinnati on Saturday. (Birm/Lettermen Row)

Stay in touch or be left out because Ohio State recruiting is a 24-hour, seven-day-per-week obsession. What’s the latest news as the Buckeyes build for the future? Get that and more Sunday through Thursday on Lettermen Row. Thursday’s notebook talks about the Buckeyes new 2020 running back offer, and talks with 2021 targets Corey Kiner and Cade Denhoff.

It didn’t take long for the Buckeyes to like what they saw from Dalton (Ga.) High School 3-star running back Jahmyr Gibbs. After a couple of weeks of communication, Ohio State extended a scholarship offer to the 5-foot-11, 195-pound Georgia Tech commitment on Thursday afternoon.

“We’ve been talking about three weeks,” Gibbs told Lettermen Row. “It was [running backs coach Tony] Alford who offered. It’s one I’ve been wanting, so it feels really good.”

Gibbs has been really good so far as a senior. In his first game of the year against Ringgold, he ran for a cool 438 yards and eight touchdowns — in three quarters.

The decision about what happens from here is going to be about a lot more than feelings, though. Gibbs is committed to Georgia Tech, and the program is making a big push to move beyond mediocrity. A major part of that effort is keeping big-time talents from Georgia in Georgia. Gibbs had rushed for 30 touchdowns in the last two seasons while running for more than 2,300 yards, and he seems ready to double those numbers this fall.

That being the case, the Buckeyes don’t usually offer players who are committed elsewhere if they don’t believe there’s a real chance of changing their minds. The first step to doing that will be getting Gibbs on campus at some point in the near future. We’ll provide updates if that’s going to happen, but it is expected to at some point.

Gibbs becomes the second running back offered by Ohio State since the end of July, joining Texas standout Tre Bradford. There’s still no offer to Henry Parrish from Miami (Fla.) Columbus High School. It now becomes very interesting to see if that offer comes before Gibbs makes the expected visit to Ohio State or if it is held off until after.

The chase for a running back or two continues.

It was mentioned in Tuesday’s edition of Dotting the ‘Eyes, but Ohio State is hosting Cincinnati Roger Bacon 4-star 2021 running back Corey Kiner this weekend.

Ohio’s top-ranked 2021 tailback, Kiner is excited to see the Buckeyes offense up close because he knows most everything about the program as a whole.

“I’m just going to soak in everything on the visit,” he told Lettermen Row. “I really know almost everything about them. I see myself fitting in with them, but I still watch very closely because there is always something to be learned during a visit.”

Because of the Buckeyes self-imposed penalty that has kept them from reaching out to 2021 recruits like other schools are able to now, Kiner didn’t hear from Ohio State on Sept. 1. He did hear from Michigan coach Jim Harbaugh before anyone else, and that’s why the battle for his services remains a very interesting one to watch.

Kiner doesn’t want to hurry a choice, though, and he is taking his time to figure it all out.

“I’m soaking this all in for as long as can,” Kiner said. “I need to know everything before I make a decision. The choice I make will change my life, so I have to make sure it’s the right one.”

The Buckeyes are going to be aggressively recruiting the defensive end position in 2021, and on Wednesday morning they offered one of the country’s fastest-rising prospects at the position.

Denhoff is a 6-foot-5, 225-pound strongside defensive end ranked as the country’s fourth-best player at his position. His recruitment has taken off in recent months after picking up offers from Clemson, Alabama and more than 20 other programs. Every offer is an important one, obviously, but Denhoff said adding a scholarship from the Buckeyes is a big one.

“It’s very exciting and very humbling,” Denhoff told Lettermen Row. “I had talked to Alford once or twice on the phone, but not in a while. I haven’t talked to [defensive line coach Larry] Johnson yet, but I am supposed to get on the phone with him in the next couple of days.”

It’s Larry Johnson’s success with a run of recent defensive ends that has captured Denhoff’s attention.

“Obviously the Bosa brothers [stand out],” Denhoff said. “Then you have Chase Young now. They do a great job with defensive ends. It’s a priority for sure to be able to visit them, I just have to schedule it.

The Buckeyes offered Cincinnati La Salle 2021 defensive back Jaylen Johnson in June, and the 6-foot-1, 205-pound, 4-star prospect has been taking his time when it comes to a college decision since.

Johnson will return to Ohio State for the third time since that offer came when he heads to Columbus on Saturday morning to see the Buckeyes take on Cincinnati.

If there’s a Commitment Watch this weekend, it could be Johnson. But he intends to remain patient when it comes to his recruitment. Ohio’s 11th-ranked prospect added an offer from Penn State on Thursday morning.