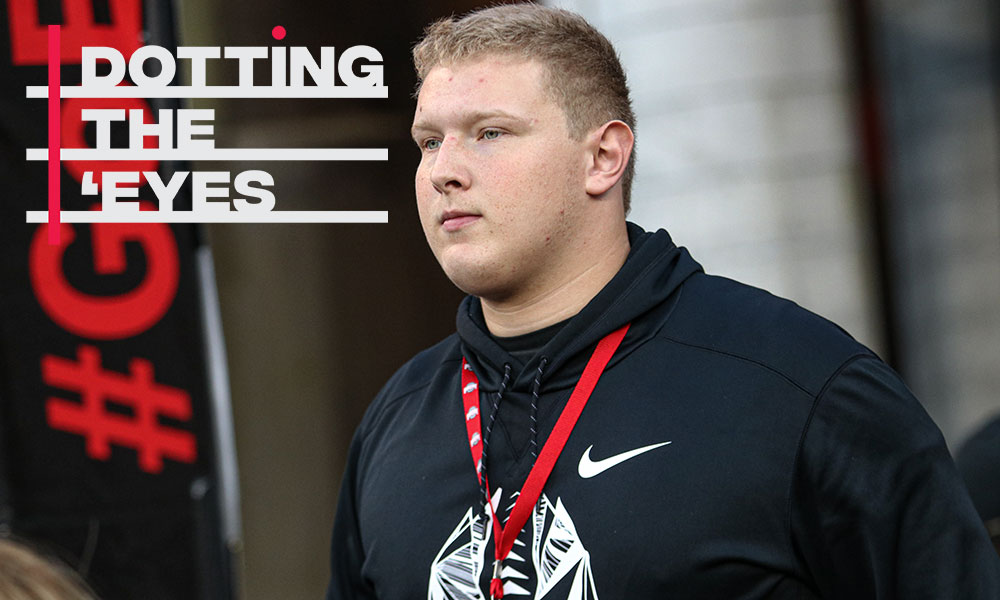 Grant Toutant is spending as much time in Columbus as he can before he enrolls at Ohio State. (Birm/Lettermen Row)

Stay in touch or be left out because Ohio State recruiting is a 24-hour, seven-day-per-week obsession. What’s the latest news as the Buckeyes build for the future? Get that and more Sunday through Thursday on Lettermen Row. On Tuesday, we catch up with a pair of Buckeyes signees as they prepare for the next step in their football careers and update the recruitment of 5-star defensive back Tony Grimes.

Grant Toutant healthy, ready to step in at Ohio State

Spring football at Ohio State means that coaches and the media who cover the program get to see their first glimpses of the early enrolled prospects in the most recent recruiting class. This spring in Columbus, that means 14 true freshmen took the field for the first time on Monday, but they weren’t the only members of the Class of 2020 on hand.

As mentioned in Monday’s edition of Dotting the ‘Eyes, three of the Buckeyes recent signees were on campus getting a first-hand look at what their futures hold. One of them was Warren (Mich.) De La Salle offensive lineman Grant Toutant. The reason for being there is simple: Seeing what to expect and getting a head start on learning what Ohio State is doing despite not being able to enroll early. The 6-foot-7, 310-pound soon-to-be freshman will be in town as much as possible before enrolling in June.

“I’ll be there again on March 19, March 28 and for the spring game,” Toutant told Lettermen Row. “And anytime I can get there in between. It just depends on my school schedule.”

The visit isn’t a passive one, either. Toutant used the time to try and gain insight into the Buckeyes offense.

“I’m watching the guys going through practice,” he said. “Taking mental reps and learning the terminology and techniques so that I am ready when I get there in June.”

Toutant is physically ready. After a torn labrum in his shoulder ended his senior season prematurely, he is medically cleared and has been working hard to prepare himself for the physical rigors of life in the Big Ten.

“I put a lot of time and effort in, doing exactly what I was told for recovery,” Toutant said. “I did my home exercises and then had physical therapy and my school trainer also worked with me. The doctor was happy but doesn’t want me to do too much and have any setbacks. After surgery I was down to 293 pounds, but now that I’m working out I’m back up to 310. That’s what the coaches want me to come in at [in June.]”

In lieu of answering this question about 5-star cornerback Tony Grimes previously, I wanted to include an update on the Virginia Beach standout in Dotting the ‘Eyes.

Is Tony Grimes still making a 4-day visit over the spring game weekend? Only outlet that has reported it is 11w. Can you confirm or deny?

I had not seen the report that a spring game weekend visit was coming for the country’s top-ranked cornerback. But his stepfather, Deon Glover, informed Lettermen Row that was not happening during a Monday afternoon conversation. To be clear, a visit is coming — but the date is unknown.

“We are still coming to Ohio State, but not for the spring game,” Glover told Lettermen Row. “But we are certainly coming for a three or four-day visit. That is coming directly from me.”

The connection between Kerry Coombs and the Grimes camp is growing strong, and that’s the motivating factor behind the upcoming visit.

“We are in heavy communication with Kerry Coombs,” Glover said. “We are working on a concrete date for the visit. Ohio State is a priority program for us.”

Hanging out on Monday with Grant Toutant was Jakob James, another Buckeyes 2020 offensive lineman signee. The Cincinnati Elder standout had a similar reason for making the trip to Columbus as his future teammate.

“Getting up there as much as I can during spring ball will be big for me,” James told Lettermen Row. “Not only just being around the guys and getting to know them better, but to start to learn the plays and the signals from the sideline and to soak in as many technique tips as I can at the interior spots.

James admits that he’ll need the help because half of the Buckeyes six offensive line signees are enrolled, and Paris Johnson, Luke Wypler and Trey Leroux are already practicing.

“Watching practice and knowing they will have two more weeks of some experience under their belt kind of gives me that feeling of missing out,” James said. “But I just have to trust the coaches up there and trust the process of working out and doing every little thing I can to be as up to date with the unit in the summer. I think seeing some of the freshmen competing for jobs already will give me, Grant and Josh [Fryar] the drive that will push us to do all the small things like technique work and film study and getting to the right bodyweight if we want to be in the same position when we get there.”