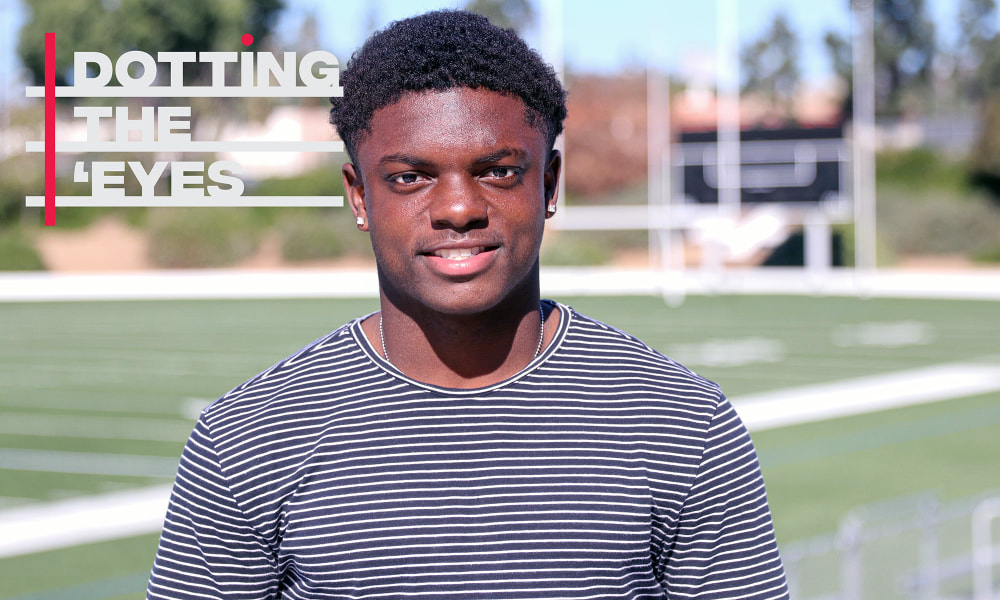 The recruitment of Clark Phillips at Ohio State is about to get more interesting. (Birm/Lettermen Row)

Stay in touch or be left out because Ohio State recruiting is a 24-hour, seven-day-per-week obsession. What’s the latest news as the Buckeyes build for the future? Get that and more Sunday through Thursday on Lettermen Row. Sunday’s notebook takes a closer look at the potential ramifications on Ohio State recruiting following the announcement that Jeff Hafley will become the head coach at Boston College.

So after one year of successfully working alongside Ryan Day at Ohio State, co-defensive coordinator Jeff Hafley has decided to leave the program for a chance to run his own. Hafley will head off to Boston College to become the coach of the Eagles, though he will be staying with the Buckeyes through the College Football Playoff.

Losing a coordinator is never easy to deal with, and it’s especially hard when the coach in question has so fundamentally changed his position-group in such a short amount of time. But losing coaches is part of college football, because just like the young men who play for the Buckeyes, the coaches leading them are often hoping to vault themselves into the next part of their career.

So, it’s hard to blame Hafley for taking a job that will allow him to run his own program, because that is why he was at Ohio State in the first place.

But from the Buckeyes perspective, losing Hafley is harder to deal with because of the timing. An extremely popular assistant leaving five days before National Signing Day means there’s almost no way to inform recruits who will coach them before they’re expected to sign a Letter of Intent. That can be devastating for a regular program, and it still hurts Ohio State even though it is one of the few programs in the country strong enough to withstand that kind of tumult.

So how is Ohio State handling the drama since the announcement that Hafley would be leaving? So far, so good as the Buckeyes have worked to answer the questions that their five defensive back commitments had as a result of the change.

Cameron Martinez, the two-way athlete from Muskegon (Mich.), told Lettermen Row on Friday night that he was focusing solely on what he could control. And though he was very close with Hafley, he intends to follow through with his commitment to Ohio State.

“I’ll be good,” Martinez told Lettermen Row. “I’m loyal in my commitment. I only worry about what I can control, and I’m a Buckeye.”

Ryan Watts, one of the three Buckeyes defensive back commitments expected to enroll at Ohio State in January, went to bed Friday night sounding uncertain about things. But by Saturday afternoon after conversations with Ryan Day and others, he had decided he was not going to make a change either.

“I’ve talked with my parents and coaches, and I’m still 100-percent committed to Ohio State,” Watts told Lettermen Row on Saturday. “I will be signing on Wednesday.”

Among the others to reach out to Watts and his family? Lejond Cavazos and his family. The IMG Academy standout will stick with his commitment, sign on Wednesday and enroll in January as he’s planned.

Lathan Ransom and his family were contacted on Friday night, and sources close to the Buckeyes felt confident that despite the shock of Hafley’s decision, things with Ransom would work out. The Salpointe Catholic (Tucson, Ariz.) 4-star defensive back told Lettermen Row on Saturday that he “is good” following his discussions with Ohio State. Being “good” falls short of removing any possibility that a change of heart could occur, but it does provide some confidence for the Buckeyes that Ransom will sign on Wednesday along with Martinez, Watts and Cavazos.

Clark Phillips situation not clear yet

The final piece of the defensive back conundrum is Clark Phillips. The 4-star cornerback from La Habra (Calif.) has not yet made a final decision on his plans following the Hafley news. The questions got louder when Phillips, the highest-ranked defensive back committed to Ohio State, got on a plane on Saturday morning and made an official visit to Utah.

Phillips has planned to enroll early at Ohio State since committing over the summer, and the loss of the coach he had planned to play for and learn from threw a major wrench into his plans. So it’s easy to understand why he’d feel the need to explore at least one other option. Phillips had also been hearing a lot from LSU, but when he picked thee Buckeyes it was actually California that would’ve been the runner-up his recruitment.

It’s hard to see exactly where this goes between Ohio State and Phillips. Yes, he was very excited to play for Hafley. But that’s not the only reason he picked the Buckeyes. Many times as signing day approaches, kids — especially early enrollees going far away from home — start to get a bit skittish about the idea of going away and want to make a just-to-be-sure type of visit closer to home.

I don’t think Phillips making this visit to Utah was just for fun. The Hafley announcement just enhanced some already existing uncertainty, and that’s what Day and the Buckeyes are going to have to overcome. To this point, there’s been very little actual conversation between Phillips himself and the Ohio State staff because of that visit to Utah.

In the midst of all the Hafley drama, there was a major official visitor in Columbus this weekend: Quarterback C.J. Stroud.

Stroud’s visit began on Friday, which was important since Day was going to be gone most of Saturday due to the Heisman Trophy ceremony. According to people in Columbus, things went as well as could be expected.

Some called it a “good trip,” while others Lettermen Row spoke with were a bit more optimistic following the visit saying it went “extremely well.” But each source had the same final conclusion: The next 72 hours leading up to the Early Signing Period will tell the tale.

Lettermen Row has reached out to Stroud for an update on the trip from his point of view, but he’s notoriously private and is likely to be even quieter as he enters decision mode.

This appears to be a two-team battle heading into Wednesday between Ohio State and Georgia. We’ll continue gathering insight about C.J. Stroud and Ohio State with the hopes of getting a final answer ahead of the midweek decision.