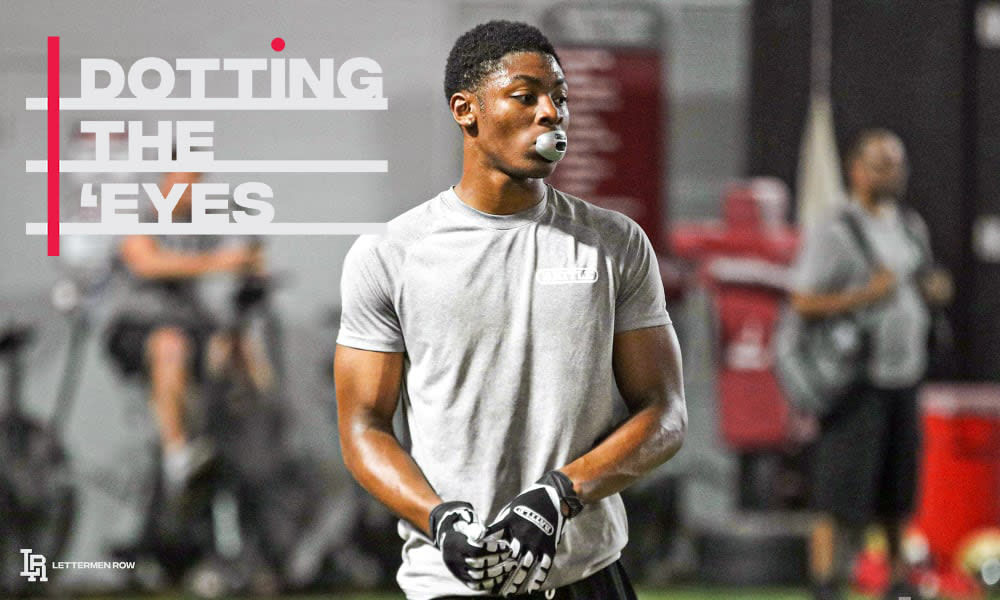 Derrick Davis was on campus at Ohio State as part of a small, exclusive group of visitors. (Birm/Lettermen Row)

Stay in touch or be left out because Ohio State recruiting is a 24-hour, seven-day-per-week obsession. What’s the latest news as the Buckeyes build for the future? Get that and more Sunday through Thursday on Lettermen Row. On Monday, we take a closer look at the Buckeyes recruiting approach and introduce Lettermen Row readers to 2023 in-state talent Luke Montgomery.

A little over a week ago as Clemson was in the midst of a big-time recruiting weekend that saw it pick up a handful of top-ranked 2021 recruits, Lettermen Row wrote about how the Ohio State approach was different.

Ryan Day and the Buckeyes realized that they didn’t want to do what every other school was doing. Subsequently, they put the junior-day idea on the backburner in lieu of smaller, more intimate weekends with top recruits that were more about relationship-building and not just a public-relations play for social media.

What are public-relations plays for social media? Stuff like this.

Now here’s the thing: That’s not a bad play at all for Georgia, who had a big recruiting weekend and hosted a number of their top targets in Athens prior to the now month-long recruiting dead period. Those big junior weekends have good food, bright lights and party atmospheres — and that’s clearly working for the Bulldogs. They’ve overtaken Clemson as the country’s top-ranked 2020 recruiting class and finished in the top two of the national rankings in 2018 and 2019. Ohio State should be less than thrilled to see any top targets visiting Georgia, let alone two of the top running backs on the recruiting big board for Tony Alford.

But the Buckeyes are doing things the way Day wants to, and that means people should expect more of what happened last weekend in Columbus. Rather than hosting dozens of recruits, Ohio State had three select prospects on campus on Saturday: Jack Sawyer, Michael Hall and Derrick Davis. That trio was able to spend hours getting to know Day better than they had before, and the weekend led to a commitment from Hall. It also allowed new defensive coordinator Kerry Coombs to get to know Davis, who has been a primary target for the Buckeyes in the Class of 2021 since the summer of 2017.

We’ve talked about the plans for more intimate, private groups for recruiting weekends. Last weekend at Ohio State was a perfect example of that in action.

It’s very early to be talking about 2023 prospects, but not so early that the Buckeyes coaching staff hasn’t decided to check in on a few of them. One of the bigger names to know in Ohio is Luke Montgomery, a 6-foot-5, 250-pound defensive end and offensive line prospect from Findlay. Ohio State isn’t alone, either, as West Virginia, Michigan State, Notre Dame and Indiana have asked about him. Western Michigan has already offered.

The attention is flattering for Montgomery.

“To even be considered by teams that big as a freshman is an honor,” Montgomery told Lettermen Row. “I’m super excited. I think it’s happening because of my size and my footwork, but also just because I’m already playing varsity sports. So I’m just learning a lot and just trying to focus on school and sports. But, yeah, I didn’t expect this at all.”

Though he played primarily defensive end as a freshman, there’s a plan in place for Montgomery to play tight end as a sophomore. But he believes his frame is likely to lead to a future on the offensive line.

“I love playing defensive end, but I am excited to play some tight end this coming season,” he said. “I also realize that I may project at left tackle if I grow a couple more inches, but based on genetics with my grandpa and cousins, I will most likely not.”

A basketball player as well, Montgomery has taken a mature approach to recruiting that belies his age. Talking to college coaches won’t leave him starstruck, and that may be the result of his interactions with an Ohio native who is known for his work on the hardwood.

“I played with Lebron James’ basketball team,” Montgomery said. “He and his friends came to watch, and I wasn’t very intimidated at all. I just think in my mind just to go and have fun and enjoy the experience. I played with his team for two years and the biggest thing I learned was to be yourself and don’t let anything get to you. And, of course, to work hard.”

Montgomery visited Ohio State for the home game against Miami (Ohio) last September and is definitely someone who will be seen on campus regularly over the next few years. Remember the name.

Ohio State coming ‘this spring’ for recent defensive back offer

We briefly mentioned Kamar Wilcoxson on Sunday, a defensive back from the IMG Academy who was offered by Day on Friday.

Day was in Bradenton to meet the Ascenders new head coach, and of course, as one of the country’s most talent-rich football programs, there was a recruiting angle in play. The decision to offer Wilcoxson was made easy by the confidence the 6-foot-1, 190-pound, Georgia-native defensive back expressed to Day.

“We were talking about Jeff Okudah,” Wilcoxson told Lettermen Row. “He said they needed a replacement for him, and I told him he was talking to one.

A former and current Florida commitment, Wilcoxson is an early candidate to have the year’s most interesting recruitment. As alluded to, he has already committed-decommitted-recommitted with Florida and has not been shy about wanting to still visit other schools, including Ohio State. He’s aiming for this spring and is working on dates for that.

“I’ve got to figure that out with my mom and stepdad,” he said. “I’m going in March probably.”

Hope this approach works but having a junior day where the recruits can bond together and meet in person isn’t a bad idea.

Those things will happen. Buckeyes had 15 official visitors on one weekend last June. Those trips are more valuable because it brings whole families together, not just kids.

Mike Hall on decision to commit to Buckeyes, plans as a recruiter
Five in-state recruits still worth watching for Buckeyes in 2021
Advertisement