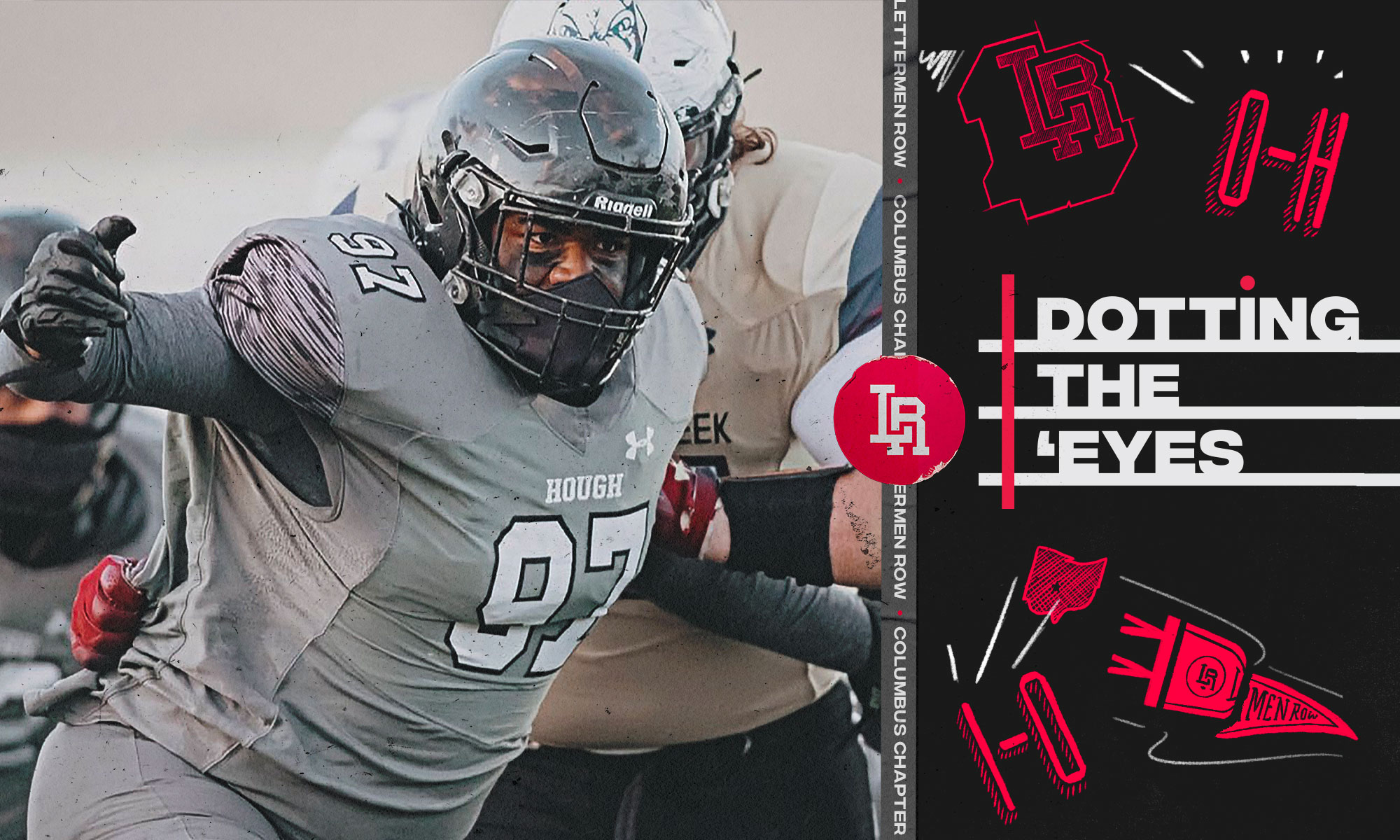 Curtis Neal has more than 30 scholarship offers and now counts Ohio State among them. (Curtis Neal/Twitter)

Stay in touch or be left out because Ohio State recruiting is a 24-hour, seven-day-per-week obsession. What’s the latest news as the Buckeyes build for the future? Get that and more Sunday through Thursday on Lettermen Row. Today we’re talking about a handful of new offers extended by Ohio State, including two more defensive tackles worth paying attention to.

It’s been a busy few weeks for Larry Johnson and Ohio State.

The venerable defensive line coach has offered a handful of new defensive tackle prospects, and the latest is Curtis Neal from William A. Hough (Cornelius, N.C.) High School. That’s the same high school that produced 2021 signee Evan Pryor, who has been working to recruit Neal for a few months now.

“[Pryor] loves it there,” Neal told Lettermen Row. “He’s been recruiting me since he got there.”

Of course, Pryor recruiting the country’s No. 23-ranked defensive tackle doesn’t matter much. What does matter is Larry Johnson, and he’s the man who extended the offer Tuesday night. Kevin Wilson, who recruits North Carolina for Ohio State, helped open the door.

“I had a Zoom call with Coach Johnson,” Neal said. “He said he loved my film and I could be the missing piece they need on the defensive line. He said Ohio State is taking three defensive tackles in our class, and he wants me to be one of them.

“[Larry Johnson] was so real. I’ve never heard anything like it. He was straight-forward. Kind of an ‘Are you in or out?’-type of thing. We literally just started talking on Tuesday, but [Ohio State] isn’t behind anyone.”

Neal hasn’t visited Ohio, but he’s starting to look into a potential official visit. He did make visits to Alabama, North Carolina and Clemson last season. The Buckeyes have definitely caught his attention, though.

“That’s my dream school,” he said. “It’s the only school I was missing.”

Whether he ends up playing for the Buckeyes or not, he’s got a recruiting story people will want to know. Originally from Germany, the 6-foot-5, 295-pound Kanu moved to California for high school football last September. Now at Santa Margarita Catholic High School, he’s turned from interesting story to big-time football prospect. Brandon Collier runs PPI Recruits, a European program that has been helping players like Kanu find college football programs. He’s never seen a player like this.

“He just started football, and his talent was so high,” Collier said. “I knew once he went to the United States that he would explode. That was the main reason for the move, to get the competition. He’s 6-foot-5, 293 pounds and played soccer all of his life until he outgrew it after he was introduced to football. He never played officially, just practiced and worked out in Germany. I started training him almost two years ago now.

PPI has brought kids to Ohio State in the past for summer camps, and if the Buckeyes decided to host them this June, they’ll likely do it again. If that happens and Kanu gets to work with Larry Johnson in person, the relationship could really take off.

The first 2024 scholarship offer by Ohio State is out. His name is Kyngstonn Viliamu-Asa, and he hails from California powerhouse St. John Bosco, the alma mater of Wyatt Davis and Kourt Williams.

Viliamu-Asa is a 6-foot-2, 205-pound linebacker who is close to wrapping up his first season of high school football. The offer came by way of Buckeyes linebacker coach Al Washington.

“Last week I heard he talked to a few of my coaches,” Viliamu-Asa told Lettermen Row. “And he watched some of my film. He said he thinks I’m off to a great start and the type of player that fits Ohio State. Coach Washington is wanting to establish and develop a good relationship between us, from now up to the point when I decide where I want to go to college.

“After talking with him, I for sure felt like he was a solid coach. He seems like a guy that cares about me, my family, and my future.”

It’s very early in his career, but the Buckeyes are the eighth offer for Viliamu-Asa. He believes his game is modeled after Troy Polamalu and Isaiah Simmons, and he expects to add another inch or two to his young frame. It’s rare to be talking about kids this young, but now that Ohio State has offered, this is a name we’ll be paying attention to.

Ohio State is still in the mix for one of the country’s No. 9-ranked strong side defensive end, Ernest “RJ” Cooper.

As a junior, Cooper recorded seven sacks and had 14 tackles for loss. He was offered by the Buckeyes almost a year ago. Ohio State is still looking for its first defensive line commitment in the Class of 2022.