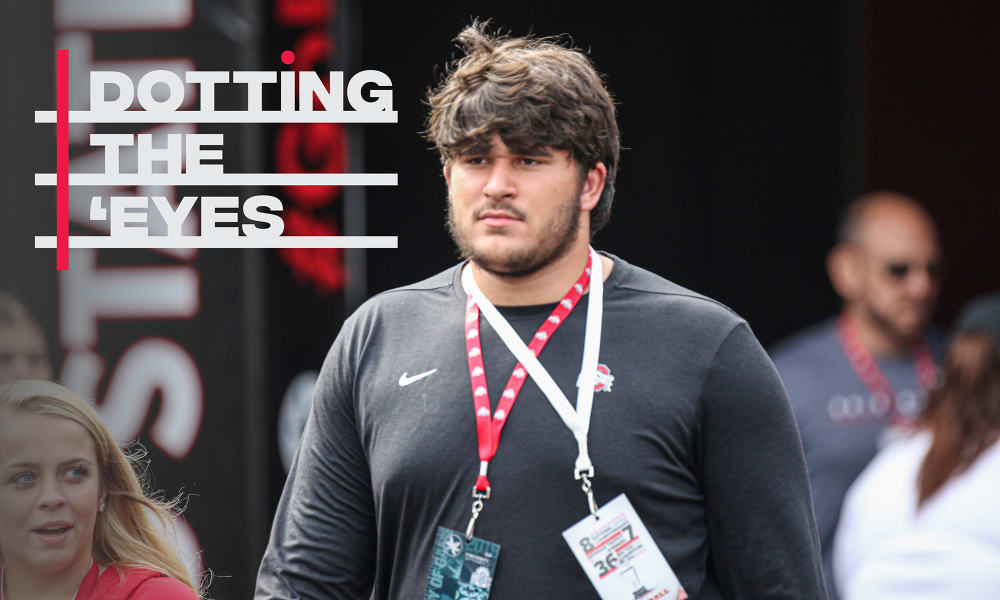 Josh Fryar is heading to the All-American game, and he'll have company from Ohio State commits. (Birm/Lettermen Row)

Stay in touch or be left out because Ohio State recruiting is a 24-hour, seven-day-per-week obsession. What’s the latest news as the Buckeyes build for the future? Get that and more Sunday through Thursday on Lettermen Row. The midweek edition of Dotting the ‘Eyes talks about All-American invitations for a pair of Buckeyes commitments and more.

“To be a part of this event is a great honor,” Simon told Lettermen Row. “All of the best players in the country come to this game. Now that I can be considered one of those, I just feel so blessed.”

Simon, the country’s ninth-ranked outside linebacker prospect, dominated proceedings at The Opening in July and posted impressive numbers in the 40-yard dash (4.53), the 10-yard shuttle (4.28) and the vertical leap (38.90 inches). He has continued to turn heads as the actual football season has rolled around.

Josh Fryar happy to have ‘family feel’ at Ohio State

Fryar’s response to the All-American game invitation was similar to Simon’s, as expected.

“It means the world to me,” Fryar told Lettermen Row. “I have always watched that game. I remember being little and watching Joe Thomas, he’s my idol.”

The 6-foot-6, 305-pound Fryar has been to Ohio State the last two weekends, checking out his future team and getting more familiar with the coaching staff and the other players in the Class of 2020.

“It’s awesome having the feeling that you have a family outside of your family,” Fryar said. “I knew basically all of the commits on the offensive line before I committed — except Luke Wypler — but they are my type of people.”

me, you & @LukeWypler on the line together in San Antonio & Columbus ///

Fryar is a composite 3-star lineman, but he is regarded as a 4-star prospect by 247Sports.com, ranked as the nation’s 16th-best offensive guard.

The communication between the country’s 12th-ranked tight end and Ohio State has continued since that visit in June.

“I’ve been talking to [Buckeyes tight ends coach Kevin] Wilson when I can,” Dingle told Lettermen Row. “It’s been going good. We are getting to know each other better, and I’m learning what they’re about as a program. I’ve also been talking to [Ohio State staff member] Trey Holtz.

The Buckeyes will host Miami (Ohio) that day, and it’s a chance for Ohio State to solidify its efforts to land Dingle. The likelihood is that Kevin Wilson and Ryan Day will look to sign a pair of tight ends in 2021, since the original plan for 2020 which included two tight ends adjusted a bit this summer after the addition of Joe Royer.

Eden Prairie (Minn.) 4-star 2021 athlete Justice Sullivan has been in conversation with Ohio State for a few months now.

“I’m just enjoying the process,” Sullivan, the second-ranked junior prospect in Minnesota, told Lettermen Row. “I couldn’t make it to camp at Ohio State this summer sadly, but I’m going to try and get down to a game this season or a visit after the season.

“I was able to talk to Greg Mattison throughout the summer.”

Sullivan is a 6-foot-1, 220-pound Iowa native who plays both ways at Eden Prairie. But most schools are recruiting him as a linebacker. He has offers from Iowa, Minnesota and Nebraska right now, but he’s had Michigan State, Wisconsin, West Virginia, Louisville, Syracuse and Notre Dame contact him or his coach in the last few weeks. There’s a lot of time left in his recruitment, and he’s trying to find a fit for him personally and athletically.

“I want to go to a place where I’m wanted,” Sullivan, whose father played basketball at Iowa State, said. “But sometimes the place that wants you the most won’t fit you the best. I’m looking for a place where when it’s football time we go out there and take care of business but off the field, we can have fun as a team and the coaches are fun to be around too. Some place that feels like a family.”