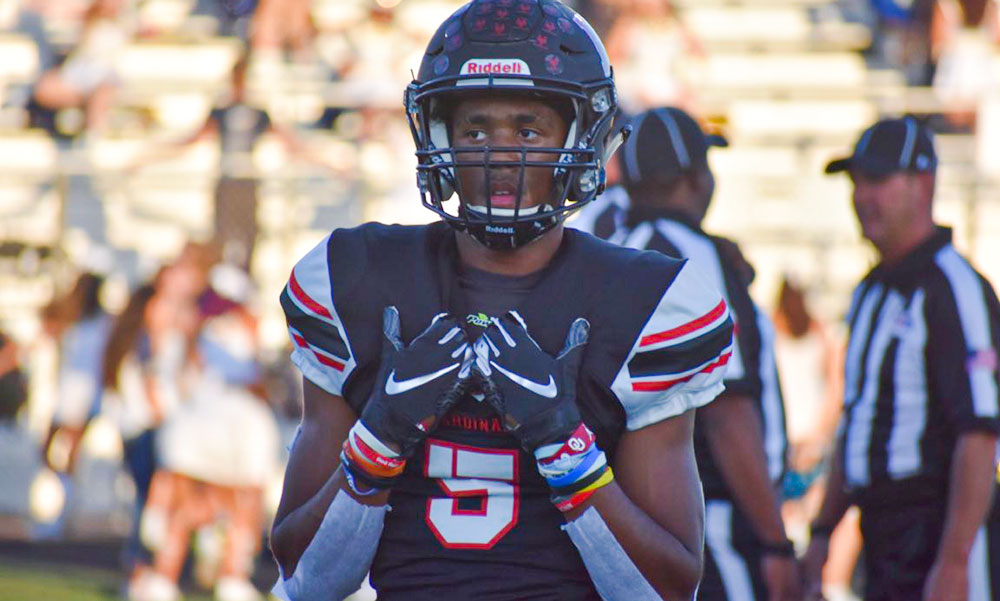 COLUMBUS — Ohio State has dipped into the Lone Star State and found a five-star gem yet again: Caleb Burton has committed to the Buckeyes.

Last week, Ryan Day got his quarterback from Texas when 2022 five-star signal-caller Quinn Ewers, the No. 1 quarterback in the class, picked the Buckeyes.

Now, just days later, the Buckeyes have landed 2022 Del Valle (Texas) five-star wide receiver Caleb Burton, locking up the No. 1 receiver in the country (according to 247Sports.com) for the second time in three recruiting cycles.

Burton, who attends high school just 17 miles from the University of Texas in Austin, chose the Buckeyes over the Longhorns, Alabama, Oklahoma, Georgia and other top programs from around the country.

Lettermen Row is analyzing the choice by Burton and what his commitment means to Ohio State, the Big Ten and the national recruiting scene for the Class of 2022.

He’s not in the same mold as the prized 2020 trio of Julian Fleming, Gee Scott and Jaxon Smith-Njigba. But Caleb Burton has as much upside as any receiver prospect in the country in the Class of 2022 — and that’s backed up by his very lofty ranking, one he’s earned despite playing less than one game as a junior after suffering a knee injury in his season opener.

The 6-foot, 170-pounder is more in the mold of Garrett Wilson, and that comparison will get thrown around an awful lot over the next few years as both kids hail from the Austin, Texas area and play a similar style of football. They’re also offseason workout buddies, so Wilson’s game is no doubt being taught to Burton now.

A coach’s son, Burton has a high football IQ and a smooth, fluid type of acceleration that gets him in and out of breaks better than most kids two or three years his senior. Burton, like Wilson, has a unique ability to go up and get the football at its highest point and possesses excellent burst at the line of scrimmage. His father and coach, Charles Burton, told Lettermen Row that is one of his star player’s best attributes. 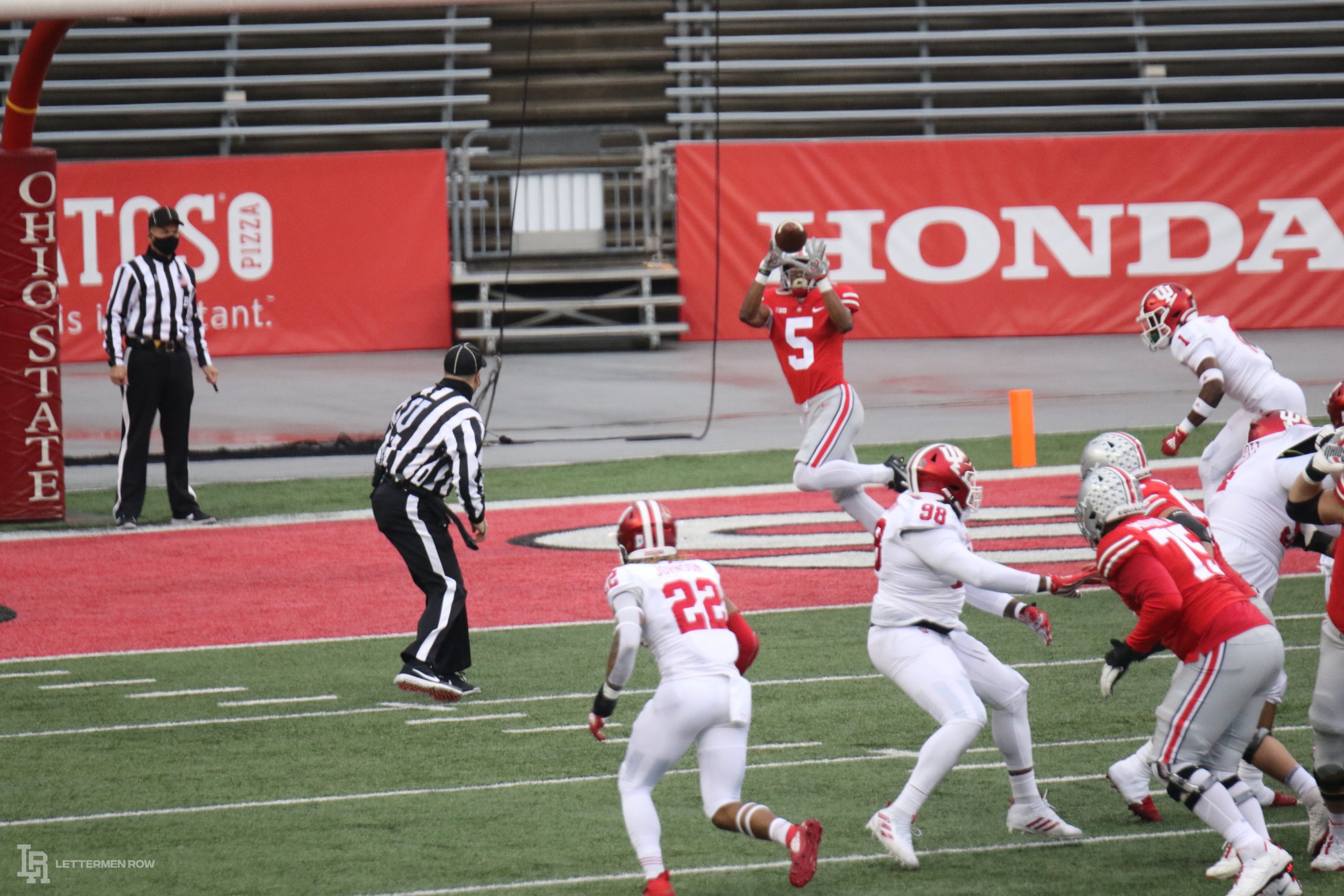 “It’s his route running and acceleration to top speed, in and out of cuts,” Charles Burton said. “He does that with great body control and ball skills.”

Like any high school prospect, there are plenty of things that Burton needs to continue to refine.

“He’s working on having a complete knowledge of defenses and what they are trying to do,” the Del Valle coach said. “That has vastly improved during the injury. He needs to improve with his blocking and becoming comfortable as a slot, an X or a Z.”

The No. 4-ranked player in Texas is emerging as a leader inside of his team, something else that has developed during the downtime his torn meniscus forced him into.

“He’s been helping the other wide receivers and offensive guys out,” Charles Burton said. “Plus, he’s staying cerebral about the game and shares what he sees. That keeps kids motivated and Caleb has become more verbal.”

If there’s a Buckeyes comparison, it’s certainly Garrett Wilson. But, depending on what kind of weight he can put on over the next two years, there’s a similar skillset to former Alabama star Jerry Jeudy, especially in the clean and precise nature of his routes.

With Wilson’s expected departure ahead of the 2022 season, Burton is a natural fit to come in and fill the same spot in the slot that his Austin-based mentor handles in the Ohio State offense.

“I hate to say that, but their game is similar,” Charles Burton said. “Hopefully Caleb develops himself in the ability to play inside and out so he can threaten all areas on the field.”

Whenever a 5-star prospect picks any college program, it’s a big deal. But the addition of Caleb Burton for Ohio State — especially this early — is another in a series of big-time blows against Texas and former Buckeyes coordinators Tom Herman and Mike Yurcich, who serves in that role for the Longhorns. The continued assault on Texas by the Buckeyes in the last handful of recruiting cycles has been a thorn in the side of that program since 2016, and it doesn’t seem to be slowing down as unease about the future for Herman persists.

Ryan Day and the Buckeyes are one of the many schools trying to take advantage of that. Thanks to Brian Hartline’s ability to quickly evaluate and build relationships, Ohio State is doing it better than most.

For the actual Class of 2022, though, having a player of Burton’s caliber committed this early is obviously huge for the Buckeyes. He’s a top-10 prospect nationally and a building block on offense along with Ewers, which provides balance to the superstar defensive commitments: C.J. Hicks, Gabe Powers, and Dasan McCullough. Adding Burton isn’t going to hurt Ohio State in its pursuit of other receivers like C.J. Williams, Kaleb Brown and Armani Winfield, either.

At the risk of sounding hyperbolic, Burton’s commitment puts another huge notch in the belt of Brian Hartline. The Buckeyes receivers coach has been on a remarkable run since being promoted as the wide receivers coach ahead of the 2018 season. Hartline helped the Buckeyes nab five-star Garrett Wilson, five-star Julian Fleming, five-star Gee Scott, five-star Jaxon Smith-Njigba, has them as a frontrunner for five-star Emeka Egbuka in the Class of 2021 and now has brought five-star Caleb Burton into the mix.

The No. 1-ranked wide receiver in the country according to 247Sports.com, Burton is a five-star prospect and is commitment No. 9 for Ohio State in the Class of 2022, growing the Buckeyes huge lead over Penn State as the Big Ten’s best class and expanding the advantage over LSU for the early lead in the class rankings nationally. Ohio State has three 5-star prospects committed already in 2022 and will push for a handful of others over the next few months.

There’s a long way to go, but the momentum being built by the Buckeyes is impressive and going to be hard for anyone in the Big Ten to catch up to. We’ll see how that plays out nationally in 2022.

Need more Ohio State recruiting #Stuff? Join the conversation below in the comments and sign up for Scarlet Sunrise, Lettermen Row’s morning newsletter that will get your day started with all the important Ohio State news you need to know. Prefer video? Follow Buckeyes football on YouTube with Lettermen Row. You can also get your recruiting fix by subscribing to Talking Stuff: The Ohio State Recruiting Podcast on iTunes, Spotify, Google Play and Stitcher
Continue Reading
You may also like...
Related Topics:Featured, quinn ewers, armani winfield, caleb burton, cj williams, kaleb brown