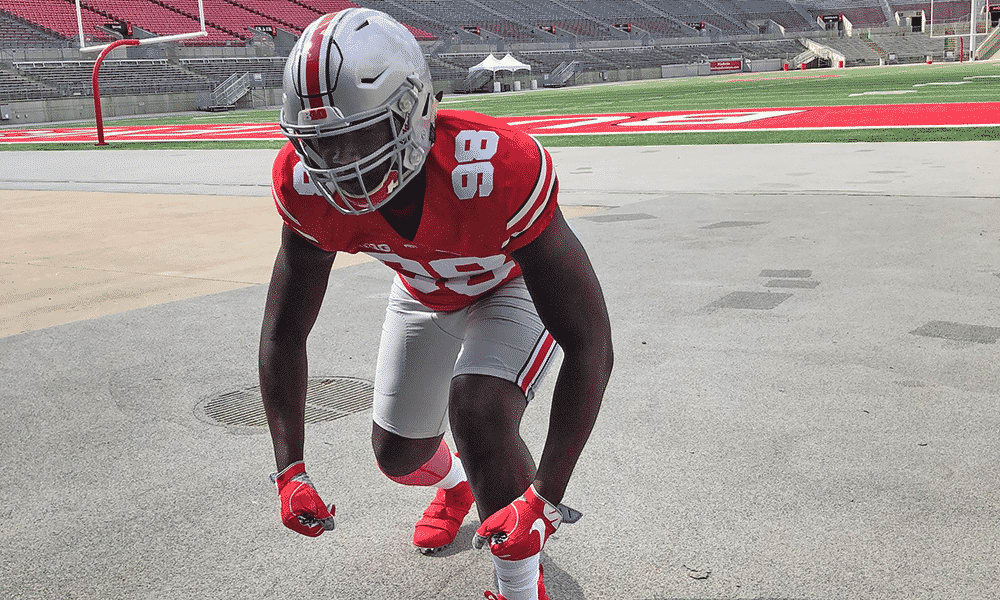 Ohio State’s defensive line recruiting could gain some much needed clarity in the upcoming weeks.

We’ve talked in the last few editions of Dotting the ‘Eyes about D’Von Ellies and the chances that the Maryland defensive tackle makes a decision soon. Of course, first the recruiting world is waiting on an announcement from 5-star defensive end Zach Harrison, and that’s expected some time in mid-August.

Before then though, there’s a chance the Buckeyes could find out where they stand in the mind of Riverside (Mo.) Park Hill South strong-side defensive end Etinosa Reuben. The country’s 27th-ranked prospect at his position could be making a college decision at the end of July, according to one Lettermen Row source.

“He is deciding the last week of July,” the source said. “After his Clemson visit.”

The 6-foot-3, 275-pound Reuben will make an unofficial visit with the Tigers starting on July 27. He took an official visit to Ohio State on the weekend of June 22-24, and he also took June official trips to Wisconsin and Georgia.

The Buckeyes have recruited Reuben as a defensive tackle. Right now, it appears it’s a three-team race between Ohio State, Clemson and Wisconsin.

Ohio State still in the mix for another Houston-area star

The Ohio State brand is strong in Texas, and another Lone Star state defensive back has included Ohio State in his current Top-10 list.

That is Houston C.E. King School’s Bryson Washington, the country’s second-ranked 2020 safety and No. 87-overall prospect. Ohio State is one of his 13 scholarship offers, a list that also includes Alabama, Auburn, Georgia, Florida State, Oklahoma and Texas.

The Buckeyes are also near the top of the list for Texas 5-star prospects RJ Mickens and Dwight McGlothern, as well as 4-star cornerback Jaylon Jones.

Ohio State hasn’t been able to have much conversation with Washington to this point, but expect that to change when the recruiting contact rules change for 2020 prospects on Sept. 1.

The 5-person group of Ohio State football commits in the Class of 2020 is pretty impressive, as you know.

What you may not know is that those future football players are just as interested in making sure the basketball program in Columbus is in good shape.

“We’re going to be elite,” 5-star 2020 prospect Paris Johnson said to Lettermen Row on Saturday following the news that 5-star 2019 point guard DJ Carton had committed to the Buckeyes. “On the football field and the basketball court.”

It’s unusual for a football prospect or a group of them to be that concerned about the hardwood. For Johnson, though, it just makes sense to try and help out the future of the entire athletic department at Ohio State.

“I talked with Carton the day before he committed,” Johnson said. “I just told him that Ohio State was the best move. We’re going to build a dynasty. Yes, we’re focusing on our class first, but we can have both sports be at the top.”

For Chris Holtmann’s basketball program, the addition of Carton means that right now the Buckeyes have commitments from two of the country’s Top 30 overall prospects in the Class of 2019: Carton (No. 21) and Alonzo Gaffney (No. 30). That duo will now work overtime to try to bring in one more key piece — Belleville (Ill.) West 4-star EJ Liddell. The 6-foot-7 Liddell is the country’s 46th-ranked player.

The good news for Carton and Gaffney? It appears they’ll have some help from the Ohio State football team.