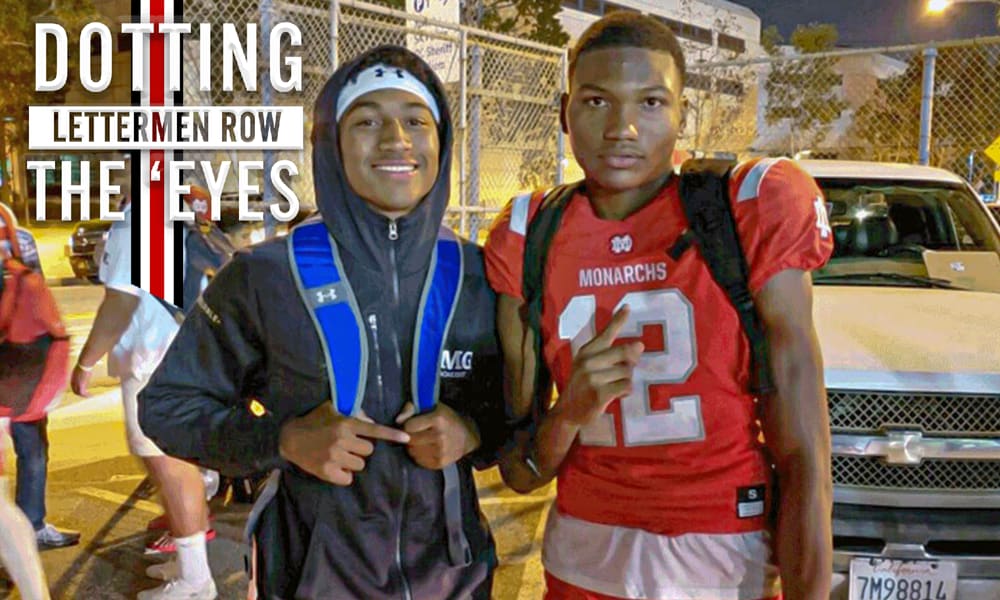 Lejond Cavazos and Elias Ricks will be teammates and cornerback counterparts in their final high school seasons. (Lejond Cavazos/Courtesy)

Stay in touch or be left out because Ohio State recruiting is a 24-hour, seven-day-per-week obsession. What’s the latest news as the Buckeyes build for the future? Get that and more Sunday through Thursday on Lettermen Row. Today’s notebook goes deeper on the bond between Elias Ricks and Ohio State commitment Lejond Cavazos.

About an hour or so after publishing that edition of Dotting the ‘Eyes, Ricks put an end to the speculation and announced that he would be playing his final season of prep football at IMG.

After all the rumors that have been circulating for months, this time it’s the truth…..

After months of speculation about his college destination, the first thing Ricks had to do was select a high school. Now, the rumblings about how his recruitment changes from here will only get louder. He will be roommates with Lejond Cavazos at IMG, and the Buckeyes cornerback commitment will be in his ear daily about the program and why the country’s second-ranked cornerback should join him there.

My job is to try to give the facts about Ohio State recruiting, and it should be noted that the odds of a flip from Ricks to Ohio State aren’t great right now. The relationship he has with Tigers defensive backs coach Corey Raymond is real and has persisted for years, while he’s only recently become familiar with Jeff Hafley and Ryan Day after building a very strong foundation with Urban Meyer.

That said, LSU’s inconsistent play on the field in recent years remains an important factor in what happens from here. What the Tigers do in the SEC this fall — and how Day’s first season as the Ohio State coach goes — could ultimately be the deciding factor in this recruitment and hopeful flip.

About that 25-man hard cap at Ohio State

We talked the other day about the 2020 recruiting class and how many players will end up at Ohio State. After speaking to sources over the last few weeks, we settled on a 25-man class for Ohio State.

That number was determined, primarily, as a result of those conversations with sources in Columbus who believed that the number moving forward had to be 25 because of stricter NCAA regulations that were enacted last year.

On Thursday morning, I received a message from another source close to the Buckeyes. That source indicated that after further review, there was still some chance the class is bigger than 25 after some internal discussions. How does the number go above 25? How far above can it go? That’s still apparently going to require some sorting out.

One source said: “It’s complicated.” But just know that the hard cap of 25 appears to no longer be an issue.

The Buckeyes landed a tight end commitment in the Class of 2020 at the start of last week when Joe Royer picked Ohio State over Arizona State, Penn State and others. But they had continued to work closely with Grandview Heights tight end Luke Lachey to see if there was any way to bring him into the fold, one way or another.

Discussions were ongoing as the two sides explored different avenues, but those conversations are now likely dead in the water.

Lachey, a Buckeyes legacy and the third-ranked player in Ohio according to 247Sports.com, has committed to Iowa.

100% Committed to the University of Iowa!!! #GoHawkeyes #swarm20 🐤 #TEU pic.twitter.com/JytQ1lJVMj

Ohio State had intended for months to take a pair of tight ends in this class. But if that remains a possibility moving forward, it’s no longer likely to include Lachey.

This week, with the recruiting dead period in full effect, we’re trying to shed some light on what’s still a possibility in the 2020 class for Ohio State. The Buckeyes have been on an impressive run in recent weeks and have answered most of the questions for Day and his staff in a short amount of time, but there are still some left unsolved.

Check out the other questions we’ve tried to answer from Monday, Tuesday and Wednesday if interested.

What happens for Ohio State if Kourt Williams picks a different school?

The Buckeyes are hoping that Bellflower (Calif.) 4-star athlete Kourt Williams joins their recruiting class sometime in the near future to fill the role of the third linebacker/Bullet for the new defensive staff. He’s been the top pick at the spot for months, and he’s expected to make a decision about his future in the next week or so.

If Williams ends up picking a school other than Ohio State, though, where will it turn? One name that remains very much in the mix — and a player Ohio State is still likely targeting anyway because the numbers can go above 25 — is West Bloomfield (Mich.) 4-star Makari Paige, who is also getting ready to make his college choice soon.

Sources in Columbus believed that Paige was leaning towards the Buckeyes following his official visit last month. However, concerns about numbers with pending announcements from Lathan Ransom and Williams potentially impacting Ohio State have some now wondering if he’s heading elsewhere because of that number’s crunch.

If the crunch isn’t as crunchy as believed, could he find his way back into the class?

If it’s not Paige, the other player I think the Buckeyes could circle back on is Westerville Central 3-star Rickey Hyatt. Hyatt has not committed anywhere to this point and has a solid relationship with Al Washington. If he holds off from making a decision this summer, he’s a player to monitor closely in his senior season.