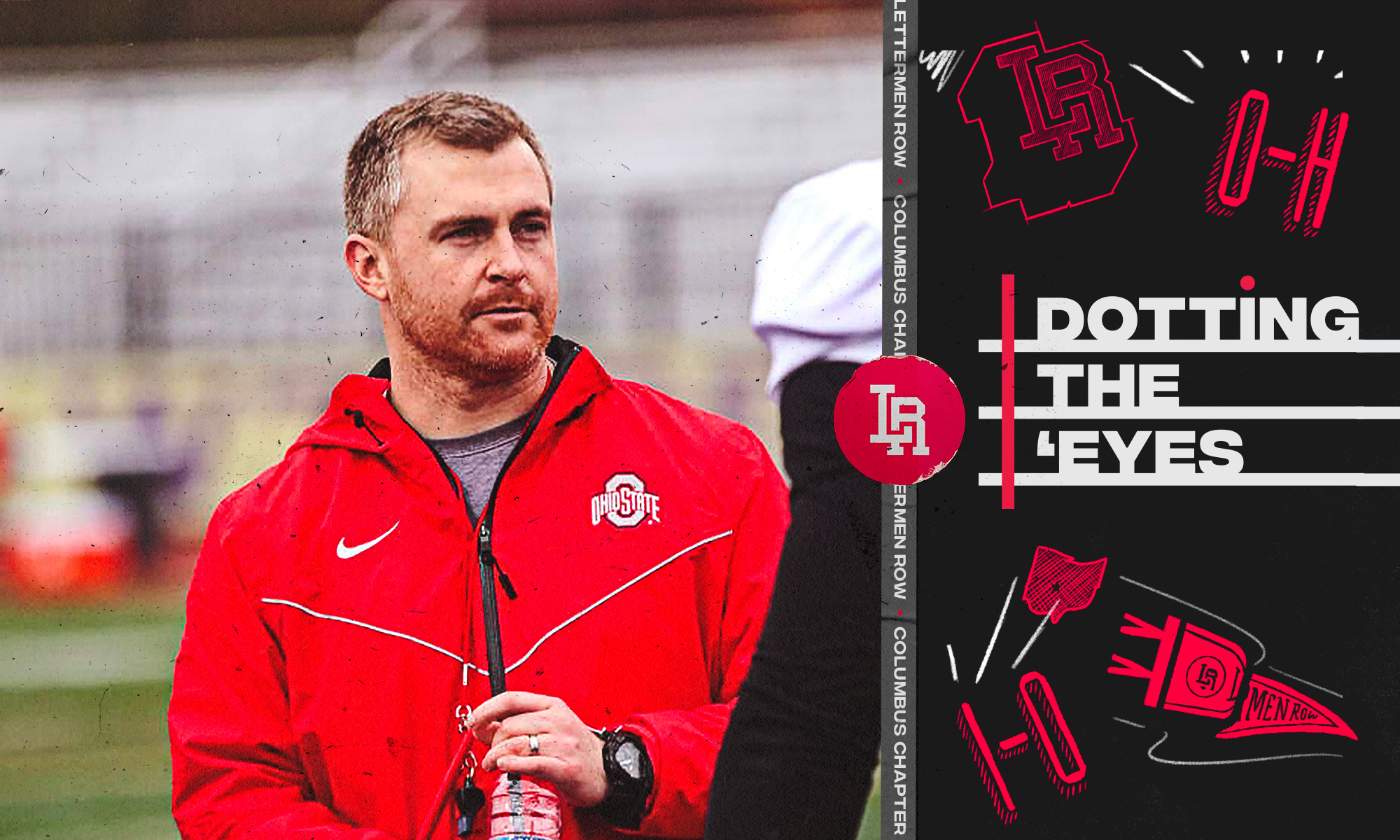 Matt Barnes has made a solid early connection with a number of young defensive backs. (Birm/Lettermen Row)

Stay in touch or be left out because Ohio State recruiting is a 24-hour, seven-day-per-week obsession. What’s the latest news as the Buckeyes build for the future? Get that and more Sunday through Thursday on Lettermen Row. Today’s notebook has updates the race for Jayden Bellamy and catches up with a trio of big-time 2023 prospects.

Even after landing commitments from defensive backs Kye Stokes and Ryan Turner this week, Ohio State remains one of the schools recruiting quick-rising New Jersey standout Jayden Bellamy. The 6-foot-1, 175-pound star from powerhouse Bergen Catholic has narrowed his school choices to six: the Buckeyes are included.

It’s an interesting mix of schools. Ohio State and Clemson each offered near the end of April and immediately became contenders with Notre Dame, Oklahoma and Penn State. That group all offered him back in February. Rutgers, is the local school, is selling the idea that keeping New Jersey’s finest prospects at home can help them take the next step up the proverbial Big Ten ladder.

The Irish, Nittany Lions and Buckeyes are set for official visits in June. That will be the first time Bellamy and the Ohio State staff meet in person. Matt Barnes has been leading the charge in his recruitment to this point.

“Ohio State,” Bellamy told Lettermen Row. “The name speaks for itself. My goal is to go to the NFL and they develop defensive backs very well. In practice, you go against the best to get better each and every day.

“The relationship with Coach Barnes is good. What makes him stand out is that he is a chill guy, really. My friend that goes to Ohio State, Denzel Burke, always says good things about him.”

And the two recent commits? Has that changed anything for Bellamy and his interest in the Buckeyes?

Ohio State is getting to know the country’s top-ranked outside linebacker and 5-star 2023 prospect Drayk Bowen.

The Merrillville (Ind.) star doesn’t have an offer yet, but has recently been hearing from linebackers coach Al Washington. As a 6-foot-2, 215-pound Indiana star, the comparisons to recently-departed NFL pick Pete Werner have been obvious.

“I have called Ohio State a couple of times,” Bowen told Lettermen Row. “Mostly with Coach Washington. They have been good talks. It’s really just wanting to get to started building a relationship and for me to get down there in June, sometime between all my baseball tournaments.”

“Coach Washington has mentioned the will linebacker spot. He compared me to Werner a little because I can give different looks on the field.”

Bowen likes what he’s seen from Ohio State linebackers over the years and say it’s very important for him to make a Columbus trip happen.

I really like the way they play. They play hard, fast and determined,” he said. “Ohio State has great linebackers every year and just play with high intensity. It’s the way I like to play. It’s a priority for me to visit Ohio State.”

There’s no shortage of big-time offensive line prospects being offered by Ohio State in the Class of 2023 and on Wednesday the Buckeyes offered one of the more intriguing young athletes at the position.

Samson Okunlola, a high-upside lineman from Massachusetts, is the No. 7-ranked tackle in the country. The offer came from Ryan Day directly.

“It was a good phone call,” Okunlola told Lettermen Row. “He talked about how he watched my film from the Under Armour Ohio camp and said how he liked that I am wrestler. This was our first time talking. First impressions are important and my first impression of him was good.”

We mentioned Okunlola as a player that Ohio State should offer from that camp a month ago but highlighted one reason it may not come.

But he’s not had any contact with Ohio State yet. The primary reason for that? There’s a belief that he and his brother, 2022 defensive end Samuel, are a package deal and the Buckeyes don’t offer players just to get other ones.

That “package deal” is something that has been overstated, according to the 6-foot-5, 295-pound Okunlola.

“When the time comes to pick a school,” he said. “We are going to choose the place that best suits us as individuals. If we happen to go to the same school, then it is what it is.”

There’s no plan yet for a return trip to Ohio but the big-time talent says he’s working on it.

“Maybe,” he said. “I’m still figuring that out right now.”

Ohio State offered 2023 defensive back Caleb Downs in February. The 5-foot-11, 180-pound sophomore now has his first visit with the Buckeyes scheduled.

The Mill Creek (Hoschton, Ga.) 4-star is a borderline 5-star prospect and is close friends with Buckeyes 2021 signee Jordan Hancock. Like Hancock, he says he’s willing to make the move to any school in the country, as long as it’s the right place for him.

“There’s no pressure to stay home really,” Downs said. “People just want for me to play in the best place for me.”

Ohio State has tried to stay in contact with Downs as much as allowed. Al Washington, Matt Barnes and Kerry Coombs have all played a role to this point, underscoring how highly regarded he is in the Buckeyes recruiting room. That June visit will be very important as Ohio State tries to establish itself as a top contender for him in the long run.