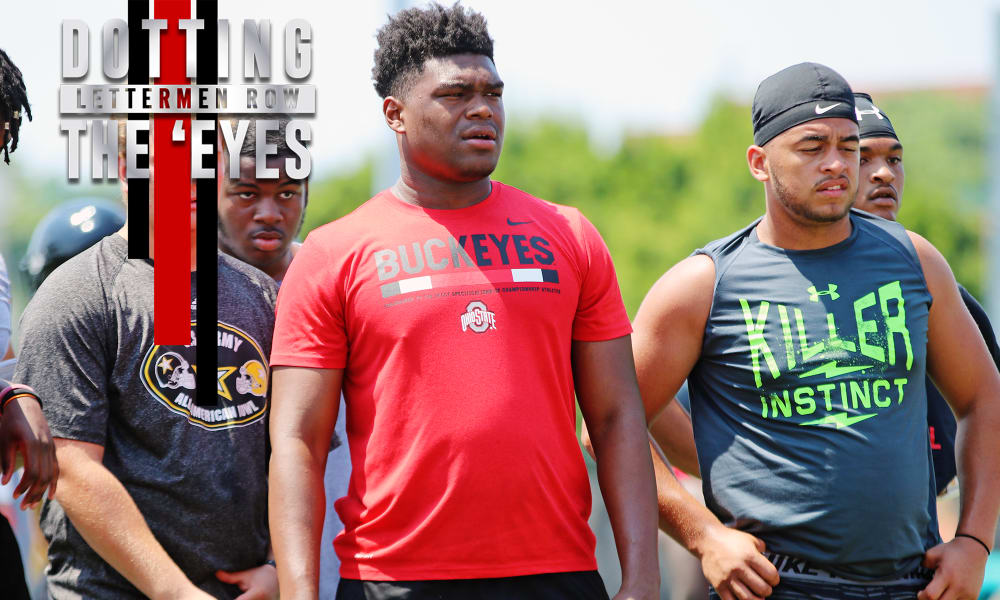 Darrion Henry will be back in Columbus for another visit with Ohio State this weekend. (Birm/Lettermen Row)

Stay in touch or be left out because Ohio State recruiting is a 24-hour, seven-day-per-week obsession. What’s the latest news as the Buckeyes build for the future? Get that and more Sunday through Thursday on Lettermen Row. Today the Buckeyes will make their final pitch for Doug Nester and

The Buckeyes first commit in the Class of 2019, Nester has been the program’s highest priority in this push toward the second signing period but the 6-foot-6, 310-pound offensive lineman has continued to befuddle the Buckeyes with his insistence on taking official visits elsewhere. He visited Penn State last weekend and is still set to see Virginia Tech this upcoming weekend.

Day and the Buckeyes have worked overtime to make sure Nester and his family understand his place within the Ohio State program. The question is will that be enough to hold off a serious push from Penn State and Virginia Tech.

We’ll know for sure a week from today.

The Buckeyes may be making their final stand with Doug Nester but the coming weekend in Columbus is going to be used to say hello to a number of big-name in-state prospects. Headlining the group will Ohio State commitment Paris Johnson, who will return to campus with fellow Cincinnati-area stars Darrion Henry and Jaheim Thomas in tow with him.

We’ll continue to update this weekend’s expected visitor’s list in the Lettermen Row forums. Sign up and let’s talk.

One player who will not be at Ohio State this weekend but says he’ll be back on campus with the Buckeyes soon is Louisville (Ky.) 4-star offensive tackle John Young. The country’s 39th-ranked offensive tackle and Kentucky’s fourth-ranked prospect has seen the Ohio State coaching staff fairly regularly in this recruiting period.

“Ohio State has stopped by twice to school before and came by the school again on Tuesday,” Young told Lettermen Row.”Coach Day and Coach Stud have been by once and Coach Wilson was by last week. Stud came Tuesday.

“They have just been letting me know I’m a priority for them. I am going up in the next couple weeks.”

Last weekend, Young visited Michigan and this week he’ll at Louisville. The hometown Cardinals have made a serious push since the hiring of new coach Scott Satterfield.

“They’ve really started recruiting me hard,” he said of Louisville. “I’ll have a better feel for them after this weekend.”

As for the Buckeyes, there’s been little change with the intensity that they’ve recruited Young since offering him in October. He says that Ohio State and Kentucky are two of the schools he knows will receive an official visit. Those are going to happen sooner rather than later because he’s got a commitment date planned for the summer.

Sometimes players get lost in the shuffle of coaching changes and that’s happened with Cincinnati LaSalle kicker Jake Seibert, ranked as the country’s No. 1-overall kicking prospect in the Class of 2020 by ChrisSailerKicking.com.

“Not too long ago Taver Johnson came into my school and asked me to come up to Columbus for a game,” the Cincinnati La Salle junior told Lettermen Row in November. “It was about two weeks ago, but I’ve been texting him. He came in and said they were looking for a kicker.”

The Buckeyes should be looking for a kicker in the 2020 class but in the midst of staff changes they’ve not yet gotten back in touch with the 6-foot-tall, 170-pound Seibert.

“With the coaching change at Ohio State,” Seibert shared. “I haven’t been in touch with Ohio State much at all. I’ve been talking a lot with Michigan State and Georgia.

“Georgia is looking to offer a guy pretty soon and I believe they have narrowed their decision down to a small number of guys they want for the spot. Michigan State is also looking to offer somebody but they want to offer later in the process for 2020 guys. I’ve been in contact with [Michigan Styate special teams analyst] Shayne Graham a lot. I know he’s an awesome coach that knows a ton about kicking.”

Ohio State is still on the mind of Seibert though and he’s hoping that Matt Barnes, who will handle special teams for the Buckeyes, finds his way to Cincinnati soon.

“I’m still wanting to get in touch with Ohio State and I’m a big fan of the program,” he said. “It’s a dream of mine to be a Buckeye and I think the Buckeyes made the right decision when they hired Ryan Day, a guy already on staff.”