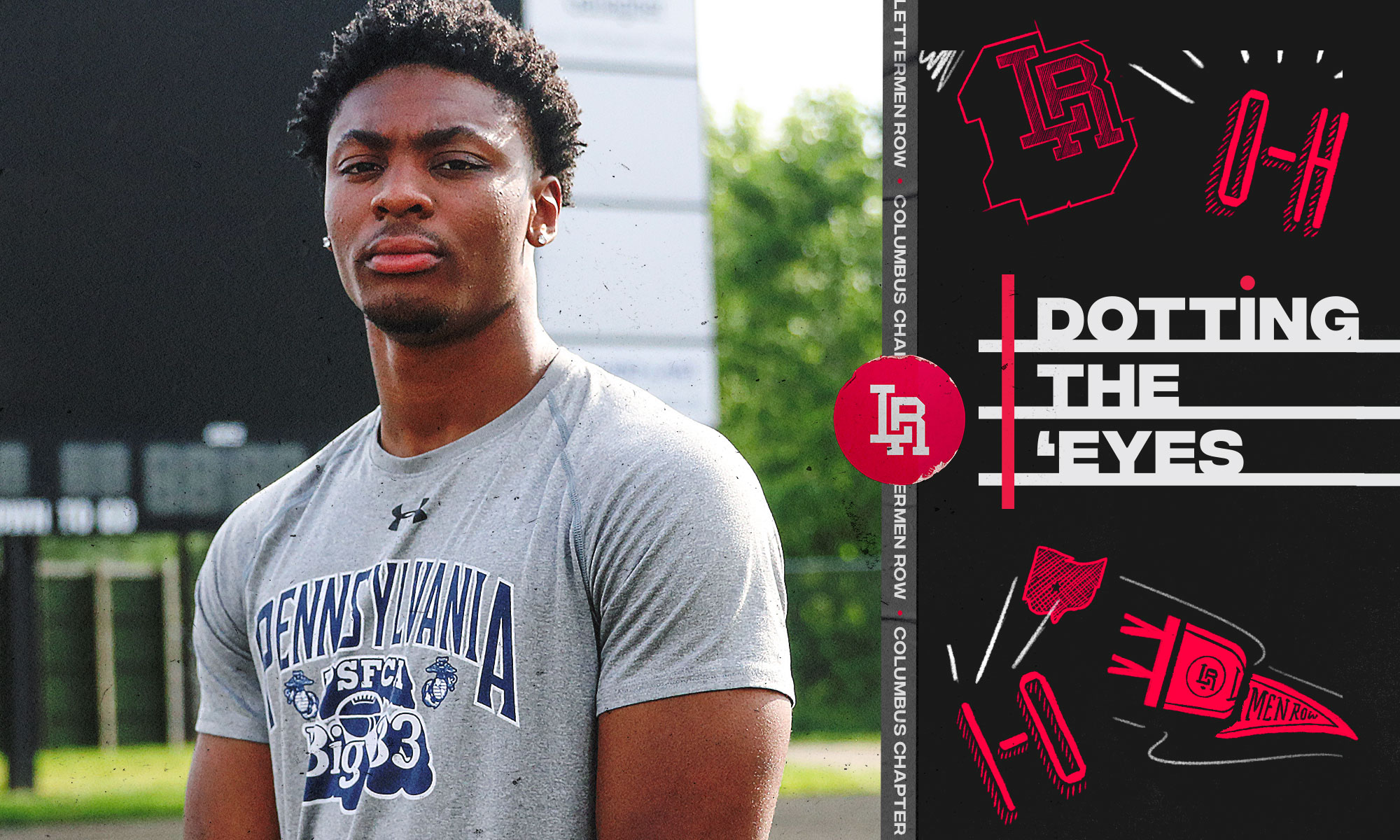 Derrick Davis has been a top Ohio State target for more than three years. (Birm/Lettermen Row)

Stay in touch or be left out because Ohio State recruiting is a 24-hour, seven-day-per-week obsession. What’s the latest news as the Buckeyes build for the future? Get that and more Sunday through Thursday on Lettermen Row. Today’s notebook has the latest on Derrick Davis, the Ohio State efforts to flip a 2021 linebacker and examines a tight end prospect who has the Buckeyes in his final five schools.

On Sunday, one of the few remaining Ohio State 2021 targets updated his recruitment with a top-seven schools list on Twitter.

First, I would like to thank all of the schools that have recruited me and have taken the time to reach out to me over the past 3 years. I am extremely blessed and humble to announce my top seven schools!!! pic.twitter.com/DmskaGtepC

Monroeville (Pa.) Gateway 4-star safety Derrick Davis, who has been recruited by Ohio State for more than three years now, lists seven schools. But his recruitment has long been labeled as a tw0-team race between the Buckeyes and the Penn State Nittany Lions. Over the last year, the momentum has changed a number of times, but the focus from Ohio State has not.

Davis has been to Columbus a dozen times or so throughout the course of his recruitment, and he told Lettermen Row last month that he’s in no hurry to make a college choice anytime soon.

The Buckeyes are recruiting only a handful of elite defensive players still for the Class of 2021, and Derrick Davis is definitely one of them.

It’s Linebacker Week at Lettermen Row, and when it comes to the Class of 2021, there are not a whole lot of names left to know for the Buckeyes.

But that doesn’t mean there aren’t any.

Ohio State linebackers coach Al Washington has remained in contact with LSU commitment Raesjon Davis since he visited campus in early March, and though a flip isn’t imminent by any stretch, the fact that conversation continues is absolutely a positive for the Buckeyes. Davis, the country’s No. 3-ranked outside linebacker, committed to the Tigers on New Year’s Day, and the Mater Dei (Santa Ana, Caif.) star remains steadfastly committed to the defending national champions. 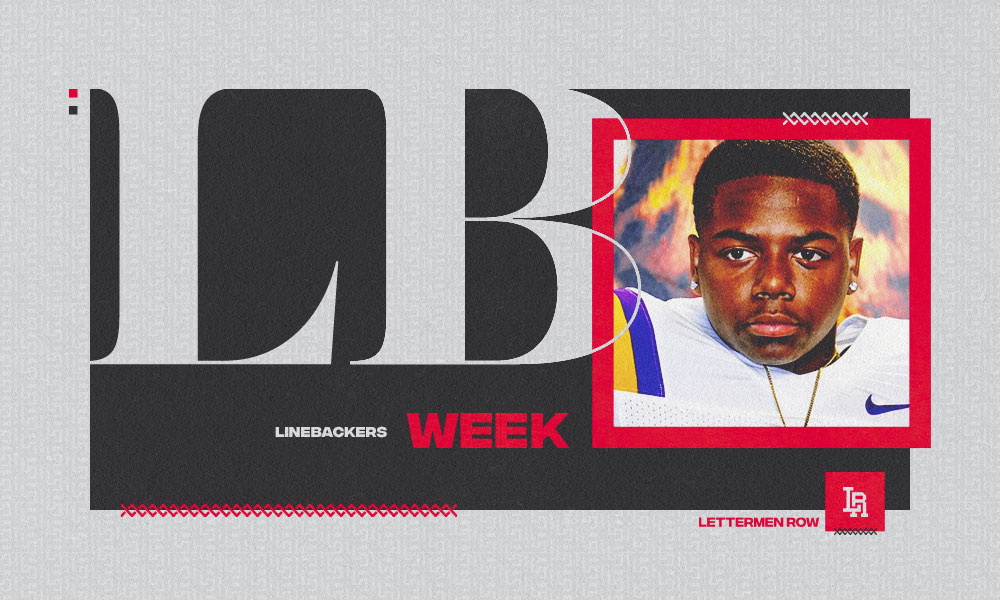 Ohio State has one true linebacker committed in this class, Reid Carrico, and has been searching for a complement for months. But it has run into a pair of Tigers — LSU and Clemson — that have caused some problems. There’s been no substantive contact between the Buckeyes and recent Clemson verbal Barrett Carter since his commitment, and Ohio State didn’t make the cut for Georgia linebacker Smael Mondon after he narrowed his list recently.

So, what does it all mean? If the Buckeyes are going to find another linebacker to line up with Carrico in 2021, it appears it’ll need to come by way of a big flip from another big-time program.

We’ve talked about the odds of the Buckeyes adding a second tight end in the Class of 2021 a few times. There’s no real need to do that right now, but if it does arise, Ohio State appears to be leaning toward playing the transfer portal game while a handful of prospects around the country jockey for position if that decision changes.

One of those players is Dametrious Crownover, a 6-foot-7, 240-pound two-sport from Grandview (Texas) High School. Crownover, who wants to play football and basketball in college, included the Buckeyes in his final-five schools list along with Texas A&M, Texas, Baylor and Nebraska — but of that group Ohio State has had the least contact with him.

So are the Buckeyes a hat on the table or is the country’s No. 10-ranked tight end just trying to catch the attention of Kevin Wilson and the Ohio State staff? If his goal is to play two sports in college, it’s unlikely that the Buckeyes would pursue too aggressively, but that’s especially true for a tight end. That position requires more game development than a lot of others do, and it’s not likely that Ryan Day would be eager to share that vital development time with Chris Holtmann and the basketball program.

Over the weekend at the UCReport.com combine outside of Columbus, Lettermen Row saw a handful of young prospects with Ohio State interest — including West Bloomfield (Mich.) 4-star athlete Dillon Tatum.

Tatum, a 2022 prospect who can play running back or defensive back at the next level, worked out on offense. Along with Cincinnati’s Gi’Bran Payne, Tatum was certainly a standout at the position. Tatum’s speed is what separates him from other players, and that’s one of the reasons why both Tony Alford and Kerry Coombs are recruiting him for the Buckeyes.

“Coach Coombs came into school twice,” Tatum told Lettermen Row. “He was saying that he wanted me on defense and that he’s going to fight for that to happen if I were to come to Ohio State.”

The Buckeyes hosted Tatum on campus in March when he visited with 4-star 2021 running back Donovan Edwards. Three weeks after that visit, Ohio State had received commitments from two other running backs, a move that was somewhat surprising to Edwards, who the Buckeyes had been recruiting for almost three years. Tatum understands the decision by Ohio State, and it won’t impact his interest in the program.

“I know that a school like Ohio State can’t sit around and wait for a player to commit to them,” he said. “My decision has to be about me and what is best for my future, so nothing has changed. The Buckeyes have elite coaches, and that’s what makes me interested in them. They know what they’re doing and compete for national titles and develop players. That’s what I am focused on.”