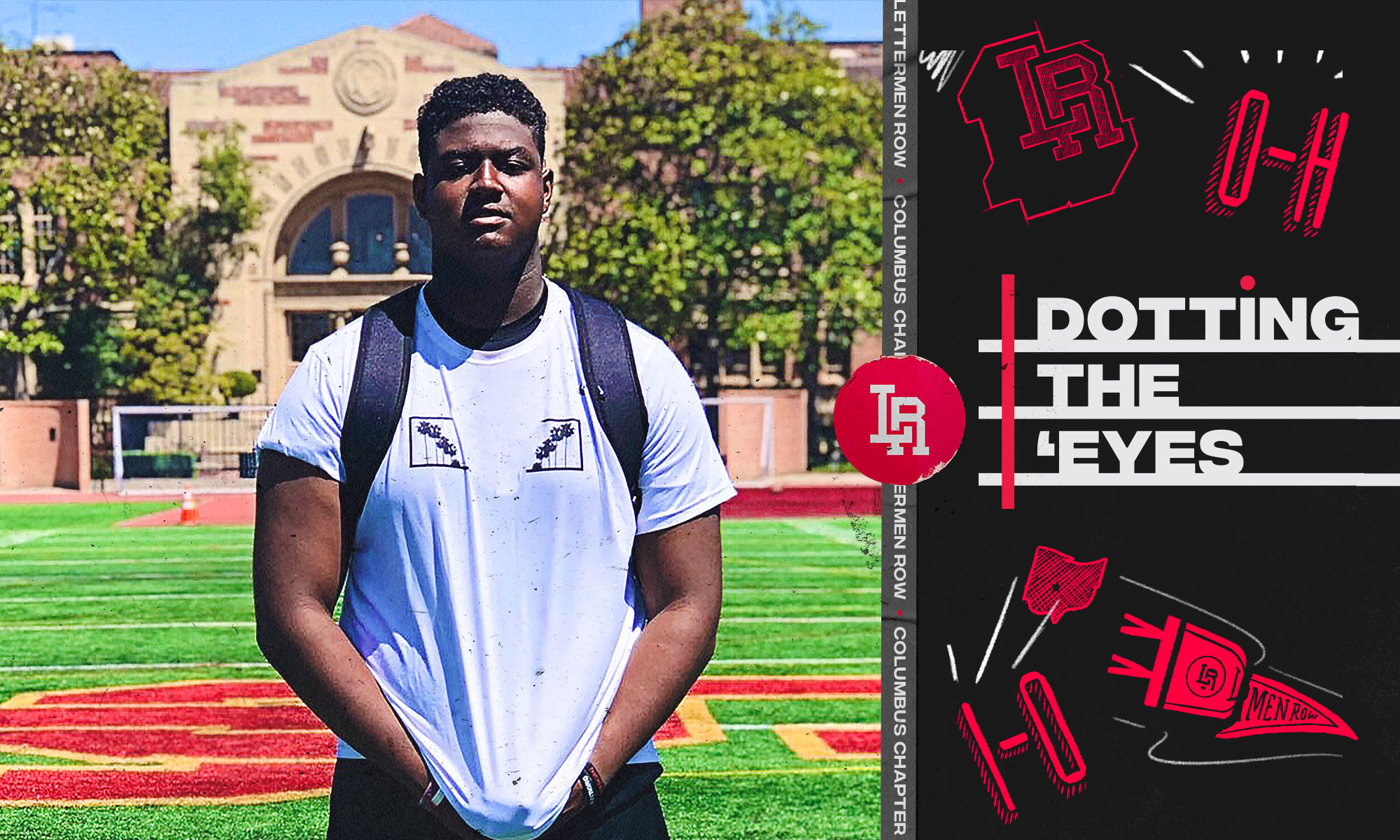 Kenji Swanson has been staying in regular contact with Ohio State and wants to visit as soon as he's allowed. (Kenji Swanson/Twitter)

Stay in touch or be left out because Ohio State recruiting is a 24-hour, seven-day-per-week obsession. What’s the latest news as the Buckeyes build for the future? Get that and more Sunday through Thursday on Lettermen Row. Today we’re looking into what another dead period extension could mean for the Buckeyes and getting updated on Ohio State’s pursuit of a California lineman.

Next week, the Division I council will reconvene and could take a vote on the the Oversight Committee’s latest proposal for the Dead Period, one that would take the current period set to expire on April 15 and push it all the way back to May 31. That would replace the hopes of an April 16-to-June 31 “quiet” period that have been percolating and instead replace them with the recruiting equivalent of nuclear winter for at least six more weeks.

This Oversight Committee should change its name to Overstep Committee, because the insinuation that Division I college programs can’t safely organize recruiting visits a year after the start of the Covid-19 pandemic is based entirely in fantasy. The NCAA permitted more than 30,000 fans at SEC/ACC/Big 12 games and played a relatively complete season of football, and yet the young men considering these schools are still being jerked around by executives and administrators who will have their pockets lined by the decisions these young players are being forced to make blindly.

Let the kids visit schools and meet their future coaches and see their future homes. Some members of the 2022 class, including Carter Smith who we introduced here a week ago, have taken to online petitions in the hopes of making a difference.

Sign it if you — yes you — would like to help. It’s well past time for permitting structured, safe visits for kids and their families.

Kids in California have been impacted by the Covid-19 pandemic more than most as the Golden State continues to drop the ball on allowing football and other sports to return. That means young men like Kenji Swanson, a 6-foot-6, 310-pound lineman at Sierra Canyon (Chatsworth) High School are going on almost 16 months without competitive football. There’s no doubt it’s slowed down his college football opportunities.

Swanson, who was offered by Ohio State following his sophomore season, is trying to not make it about him.

“It didn’t necessarily mess up my recruitment for me,” Swanson, with 15 offers, told Lettermen Row. “I’m beyond blessed to have offers and interests from schools. However, I would have loved get film to show to college coaches. It is also very hard narrowing down schools and figuring out where I want to go while not being able to take visits, see schools in person and meet coaches in person. Not having a season really messed up more of the seniors on my team, their recruitments.

“They work hard, and their hard work and talent was not able to be seen. I do my best to share their film or even just introduce them to coaches and help them out as much as possible.”

The Buckeyes have maintained interest and contact with the 3-star lineman despite the lack of football. He hopes that turns into a visit to Central Ohio whenever the NCAA stops jerking kids around.

“I consistently talk to both Coach Studrawa and Coach Day,” he said. “I have a great relationship with both. We are alll disappointed about not being able to play my season yet, because I was excited to show the coaches some great film and they were excited to see me play.

“But I’ve been contact with Ohio State constantly. We text multiple times every week and we get on the phone often. Hopefully I’ll be able to visit schools soon once things start to open back up. I would love to visit every school that has offered me, and I’m really excited to visit Columbus, Ohio — I hear great things and can’t wait to see it for myself.”

Walter Nolen, the No. 1-ranked defensive tackle in the Class of 2022, has released his Top 10 schools and the Buckeyes have made the cut.

A 6-foot-4, 300-pound lineman from Cordova (Tenn.) St. Benedict, Nolen has all the big boys on his list and has a long, long way to go before a final decision is made. Larry Johnson’s reputation as a talent developer is what has brought the Buckeyes to this point, but at this point it’d be a major upset for Ohio State end up the eventual choice.

A few years back Ohio State briefly recruited Michigan prep standout Jaron Mangham, who ended up at Colorado and recently transferred to South Florida. Now Jaden Mangham, a 2022 athlete from Birmingham Groves High School — a Detroit suburb — is hearing at least a little from the Buckeyes.

“Most definitely,” Mangham told Lettermen Row when asked if he’d been excited to get a call from Ohio State. “Hopefully it means that I’m on their radar and that they are interested in me as a recruit.”

Mangham thinks he can be a defensive back in Columbus and has excellent size at 6-foot-3 and almost 190 pounds, which has some schools viewing him as a potential wide receiver. So far, he has 32 offers, which includes places like Virginia Tech and Miami. Even Alabama has, at least preliminarily, offered. Mark Pantoni is the one who reached out from Ohio State, and did so because of what he saw on film. The Buckeyes are hoping Mangham, the No. 11-ranked prospect in Michigan, is able to get himself to a camp in Columbus this summer.

If there is one.

“He said that I was a big time player,” Mangham said. “I need to get down there as soon as things open back up.”

The Buckeyes love recruiting Texas and have offered another young prospect from the Lone Star State, Tre Wisner from Connally (Waco) High School.

Wisner, a 2023 standout at tailback, was offered by Matt Barnes but could play either side of the ball at the next level. He told Lettermen Row that the Buckeyes liked his versatility on tape.

“The way I could run the ball and also make plays on defense,” Wisner said. “The awareness I have.”

The 5-foot-11, 180-pound sophomore grew up dreaming of playing for Ohio State, but ironically that was because of a basketball player who never played at Ohio State.

“Never in my 15 years of living did I think Ohio State would offer me like this,” he said. “This is my dream school and not many kids in Texas get to experience this, but to the kids like me I want everyone to know hard work pays off. I knew Lebron James was from Ohio — not Columbus — but I’m a big fan of his and I was just always like: ‘I wanna go to Ohio, mama.’ I want to go and be a LeBron James of football.”

The offer from the Buckeyes is the fifth for Wisner.