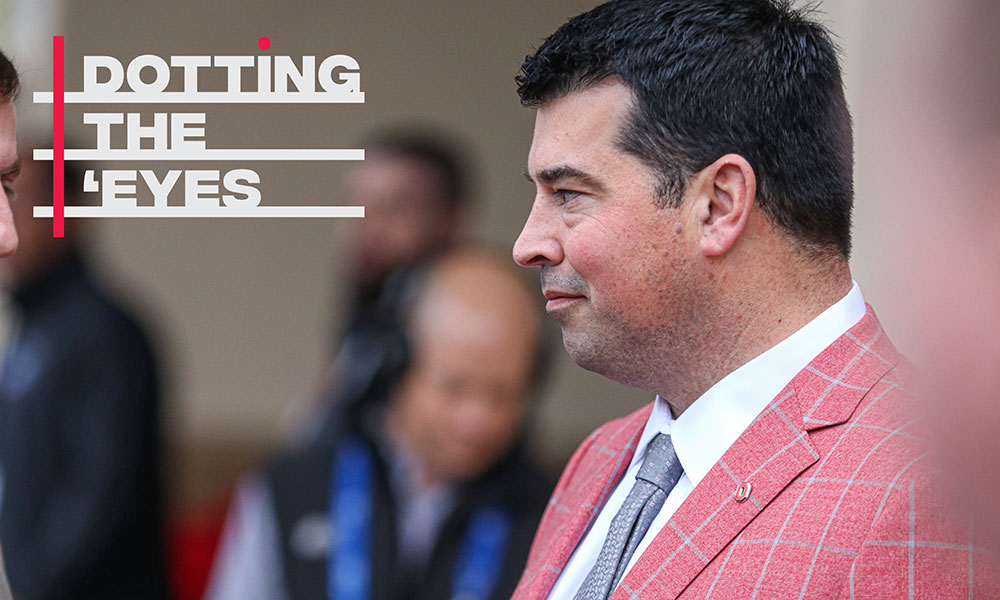 Stay in touch or be left out because Ohio State recruiting is a 24-hour, seven-day-per-week obsession. What’s the latest news as the Buckeyes build for the future? Get that and more Sunday through Thursday on Lettermen Row. Tuesday, we take a look at where Ohio State goes next on the recruiting trail after a chaotic 48 hour-stretch that saw the Buckeyes add four new commitments to their 2021 class.

That was a fun 48 hours or so for the Buckeyes. What started as one commitment from cornerback JK Johnson turned into four commitments as Devonta Smith, Evan Pryor and Andre Turrentine entered the In column for Ohio State in the day-and-a-half that followed.

It was an unexpected run during an uncertain time. But stepping back, it makes a lot of sense for four players who play two major positions of need in 2021 to lock themselves into their spots with the Buckeyes. The Ohio State coaching staff may have higher-ranked players on the recruiting big board right now, but there’s something to be said for young guys who are ready to jump on an opportunity because it’s where they truly wanted to be.

Pryor, Johnson, Smith and Turrentine have all been leaning hard in the Buckeyes direction for the last four or five months. And as the unknowns around the coronavirus outbreak add up, the timing was right for these guys to subtract some of the potential dramatics that could occur if they decided to continue playing the recruiting game over the next few months.

Are Buckeyes done for now?

So, the natural question that follows a significant recruiting push like the one at Ohio State is currently pulling off is whether or not it’s over.

And in this case, it probably is. Unless …

OK, so there’s this groundswell momentum right now for Ohio State on the recruiting trail when it comes to 5-star running back TreVeyon Henderson from Hopewell (Va.) High School. Lettermen Row talked to Henderson and his coach, Ricky Irby, a week ago in Virginia. There was, at that time, not a single thought being given to any decision being made anytime soon.

There was, though, a very noticeable shift in Henderson’s countenance when we talked about the Buckeyes and his relationships therein — despite the fact that, to this point, he’s never been on the Ohio State campus.

His mood changed decidedly when he began talking about his bond with Tony Alford, something that has been built over the last handful of months. The Buckeyes have been clear with Henderson on how they want to utilize him and have even shared that the expectation is they’ll take two running backs in the Class of 2021.

When J.K. Dobbins committed to Tony Alford back in February of 2016, he did so without ever stepping foot on campus in Columbus because the relationship with the Ohio State position coach was so strong. Henderson may be similarly inclined — not just because of the bond with Alford, but also with linebackers coach Al Washington and Ryan Day, each of whom have also been invested heavily in getting to know the 6-foot-1, 210-pound tailback.

If there’s a decision coming from Henderson anytime soon, it’s likely to be a very good thing for Ohio State. Irby told Lettermen Row on Monday that the Buckeyes are out front for his star running back, and that the current recruiting situation may put some kids in a position to adjust their line of thinking.

Then, when asked if he could see a scenario where a commit came before a campus visit, he replied: “I don’t know, man. With this virus shutting everything down, it changes things.”

The Buckeyes are hoping it does, no doubt.

Ohio State defensive back targets are officially on clock

With the addition of Andre Turrentine, the Buckeyes are now sitting at four defensive backs in a class that is likely to number six. That means the rest of the country’s secondary options — even if they’re primary options for Ohio State — may need to take note: The boat is getting full.

How the Buckeyes navigate through their remaining targets will be an interesting thing to watch. There’s interest in 5-star Tony Grimes, of course. But without the extended visit he had planned for this spring, it seems unlikely that recruitment will pick up any real steam in the near future. There was talk about two or even three visits this spring for Monroeville (Pa.) 4-star safety Derrick Davis. Davis has been to Ohio State multiple times and is too good to pass up no matter how many players commit, but certainly the Buckeyes would prefer to not be in a position where he feels things are so crowded that it affects his choice.

There are plenty of other cornerbacks on the board for Ohio State. Clemson commit Jordan Hancock remains at the very top of the list for the Buckeyes, but his recruitment is not going to be easy to turn around no matter how much he and his family remain in conversation with Ohio State. Kentucky’s Jantzen Dunn is a player to continue watching closely, but his father, Mitchell, told Lettermen Row that his son “at a standstill’ with respect to his recruitment because of this unplanned for dead period.