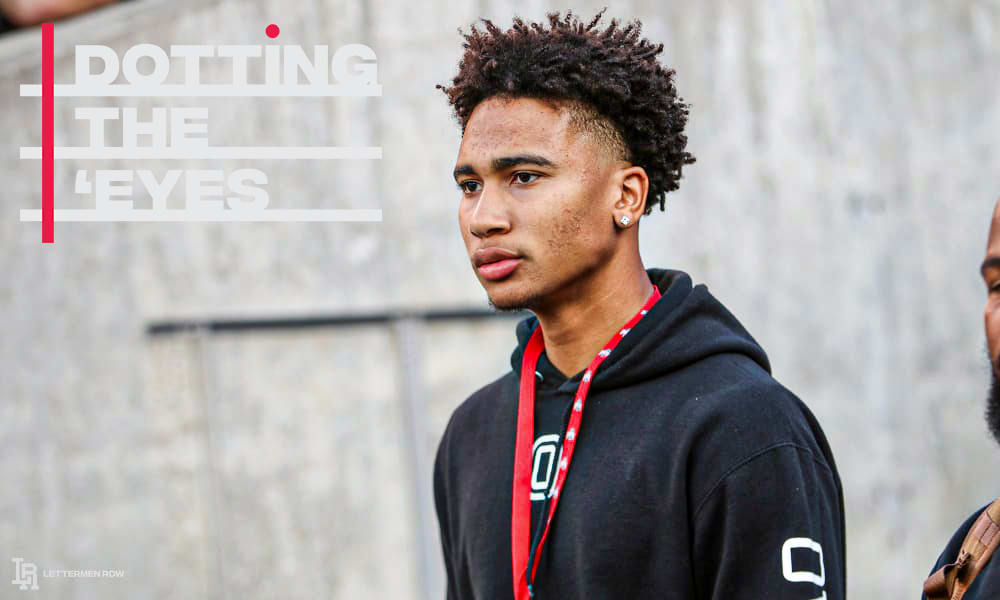 Stay in touch or be left out because Ohio State recruiting is a 24-hour, seven-day-per-week obsession. What’s the latest news as the Buckeyes build for the future? Get that and more Sunday through Thursday on Lettermen Row. On Monday, we discuss the latest scuttlebutt around quarterback target C.J. Stroud and the Buckeyes odds of landing him in the Class of 2020.

Ohio State’s top remaining uncommitted prospect in the Class of 2020 spent his weekend in Ann Arbor, getting to know the coaching staff at Michigan with just less than two weeks before a decision is expected in his recruitment.

Rancho Cucamonga quarterback C.J. Stroud, the country’s No. 2-ranked pro-style quarterback according to the 247Sports.com composite rankings, will wait a week at home before getting on another plane back to the Midwest next weekend for his official visit to Ohio State.

Then it’s the Buckeyes, Wolverines, USC, Georgia and others who will be waiting.

There isn’t really any palpable buzz coming out of Ann Arbor following Stroud’s visit with the Wolverines, and that’s kind of expected because he’s one of the more private prospects in the country. But there’s no doubt Jim Harbaugh and his staff showed him a good time and a potentially favorable depth chart, especially as Michigan waits for a quarterback commitment in this recruiting cycle.

The relationship with Michigan is new, and it was always going to be a tough task to sway Stroud away from the programs that he’s spent the last few months learning about and getting to know. That doesn’t mean the Wolverines are out of this right now, and they’ll certainly send coaches back to California this week to see Stroud. But all eyes in his battle now turn to the coming weekend.

Can the Buckeyes, the rumored leader in his recruitment for most of the last few months, do enough to show Stroud and his mother that they’ve got the best plan for his future? We’ll know for sure in just about 10 days, but the opportunity is there for Ryan Day and the Buckeyes.

Ohio State coaches waste no time getting on the road

Prior to Day and the Buckeyes welcoming Stroud to Ohio State this weekend, though, he and his mother are expected at some point to welcome the coach to California. Stroud is one of a number of recruits that Day is expected to visit this week, but according to one source in Columbus, the California quarterback could be the lone non-committed prospect in the Class of 2020 to see the head man this week.

If that’s not a sign of Stroud’s importance then I don’t know what is.

Day left the Woody Hayes Athletic Center on Sunday following his College Football Playoff press conference and immediately got on the road to see Ohio State commitments ahead of next week’s signing period.

Ohio State coaches scattered all over the region on Sunday night. Jeff Hafley was in Michigan checking in on Cameron Martinez before taking off to Arkansas on Monday afternoon, where he’ll find out if he’s won the Broyles Award as the country’s top assistant coach. Larry Johnson was in North Carolina to see Jacolbe Cowan on Monday after seeing Darrion Henry with Day on Sunday.

Brian Hartline was in Texas with Day on Monday morning to see Jaxon Smith-Njigba, and that duo is expected in Pennsylvania on Tuesday to sit in with Julian Fleming and his family. There’s a lot of frequent flyer miles being racked up in Columbus this week, in other words.

The Buckeyes are looking to make the most of this week after losing out on key recruiting days a week ago, but the biggest priority is talking to families and commitments, especially those who intend on enrolling early with Ohio State.

It was discussed last week on Talking Stuff but not here, so I wanted to make sure readers were up to date. There’s a commitment date planned for 2021 4-star offensive lineman Donovan Jackson.

I will be committing January 8th.

There was some scuttlebutt that a decision from Jackson could come much sooner than early January, but that date is now the big day for the Texas standout and the teams recruiting him.

Ohio State, Texas, Texas A&M, Alabama and Oklahoma are the schools most closely linked with Jackson. But the timing of his commitment, coming off a one-week stay in the Midwest after his Buckeyes visit for the Penn State game has to be considered a good thing for Day and his program.

Ohio State is dealing with coaching rumors on its staff, but the program isn’t alone when it comes to that. Two of the country’s most prominent programs could be on the verge of losing big-time assistants as well.

It’s already official that Georgia offensive line coach Sam Pittman is the new coach at Arkansas. Pittman has been a major factor in Georgia’s resurgence, guiding the Bulldogs to an impressive haul on the offensive line in each of the last two seasons. He hasn’t gone head-to-head many times with Ohio State directly, but it’s a big loss for Georgia.

Clemson offensive coordinator and wide receivers coach Jeff Scott is also reportedly close to moving on with a head-coaching opportunity at South Florida luring him away from the cozy confines of Clemson. Scott has helped turn the Tigers into one of the country’s premier developers and recruiters of wide receivers since landing in Clemson prior to the 2008 season, and he was one of the few holdovers from Tommy Bowden’s final staff for the Tigers when Dabo Swinney took over.

Scott’s departure hurts Clemson for sure, as he’s been instrumental in their recruitment of 2021 receivers Beaux Collins, Troy Stellato and Emeka Egbuka to this point. But like Ohio State, the Tigers are in a position where finding the next big thing should come relatively easy for them. Still, it means a new relationship to forge, and when it comes to rapport and chemistry, any change is valuable for programs recruiting against Clemson or Georgia.

Ohio State could have record group of early-enrollees in 2020 class
Cam Martinez ready for change of positions, scenery at Ohio State