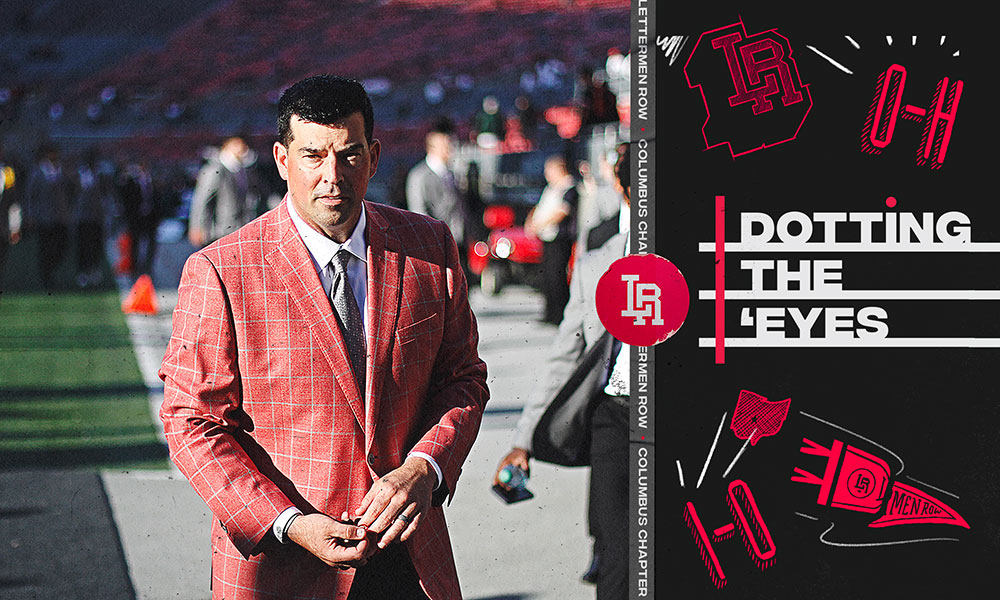 Ryan Day has Ohio State in the No. 1 spot in the national recruiting rankings. (Birm/Lettermen Row)

Stay in touch or be left out because Ohio State recruiting is a 24-hour, seven-day-per-week obsession. What’s the latest news as the Buckeyes build for the future? Get that and more Sunday through Thursday on Lettermen Row. Today’s notebook has the latest on the Buckeyes efforts to win the 2021 recruiting title, a top five list for a talented but raw defensive end and more.

On Wednesday, Ohio State added commitment No. 16 in its 2021 recruiting class when defensive lineman Tunmise Adeleye picked the program over Florida, Oklahoma, Alabama, Miami and others. His commitment came as a surprise because he had been planning to make a decision in August, but Ohio State had been at or near the top of his list for months leading up to the choice.

With Adeleye in the mix, the Buckeyes now have 11 committed players ranked inside the top-100 spots and are continuing a remarkable run that has seen Ryan Day’s program jump out to a very healthy and comfortable lead over Clemson as the best class in this recruiting cycle.

Worth noting: Ohio State’s lead is primarily based on its commitments number since it has six more verbals than the Tigers do. That gap is going to close, and Clemson, Georgia, Alabama and LSU will eventually give Ohio State a real fight for the No. 1 spot in the 2021 class. But there’s no doubt that the Buckeyes are in an excellent position to finally win a national recruiting title, and if the midweek rerank from the 247Sports.com folks is an indicator, that standing could and should continue to improve.

We’ve written at Lettermen Row about Washington’s J.T. Tuimoloau, who remains the top-ranked player in the country according to the industry-leading network. But the recent adjustment saw a major jump for Buckeyes target J.C. Latham, who now checks in as the No. 3-ranked player in the nation. Long-time Buckeyes commitment Jack Sawyer is No. 4. Emeka Egbuka, Ohio State’s top receiver prospect for the last year, is No. 7 on the updated list, moving up two spots. And Donovan Jackson, who fell two spots, rounds out the top 10.

Those are five very real candidates to sign with Ohio State in the Class of 2021 — and the country’s No. 12-ranked player, TreVeyon Henderson, is also committed to the Buckeyes. When the parameters are expanded to the top 100, the impressive nature of this year’s recruiting class takes on an even greater magnitude.

That is a whopping 16 potential top-100 players in the Buckeyes 2021 recruiting class. Sure, numbers will change and not each of those players will commit to Ohio State. But the possibility of something truly historic happening in this cycle is real for the Buckeyes. Very real.

With the aforementioned historic class a real possibility, there is one thing that isn’t likely to occur for Ohio State in this cycle: Projects.

There aren’t a lot of spots left in the class, and the Buckeyes are involved with so many big-time prospects from around the country that it seems the developmental talents that have filled out classes in the past may not be possible in 2021. That means players like Erasmus Hall (Brooklyn, N.Y.) defensive end Jahzion Harris, who has been talked about in Ohio State recruiting circles for three years because of the program’s connections to his high school, are probably on the outside looking in if they’re interested in making a decision anytime soon.

Harris, a three-star defensive end according to the 247Sports.com rankings, isn’t expected to decide soon. But he did release his final five schools on social media Wednesday evening.

Harris did not visit Ohio State last year, so it’s hard to say exactly where his relationship with it is right now. What’s not hard to say is that he’s a talented prospect with a high upside, but right now he’s unlikely to end up following in the footsteps of fellow Dutchmen like Curtis Samuel or Matthew Jones who picked the Buckeyes.

Blessed to receive an offer from The Ohio State University!! pic.twitter.com/23sckjru18

Schrauth is the country’s No. 5-ranked sophomore defensive tackle, but he was offered by Ohio State offensive line coach Greg Studrawa as an interior offensive line prospect.

“We had a good conversation on the phone,” Schrauth told Lettermen Row. “I think he’s a great coach and an even better guy. I could tell he really cares about my future.”

The Buckeyes winning tradition is what most captures the attention of the 6-foot-5, 290-pound Schrauth, who plays at St. Mary’s Springs High School in Fond Du Lac, Wisconsin.

“I come from a winning program,” the lineman said. “So them being one of those teams in contention for a national championship every year is really important to me.”

Schrauth is intending to visit Ohio State at his earliest opportunity, whenever the NCAA-mandated recruiting dead periods are over.

Ohio State tried to make a play for Marist (Chicago) offensive lineman Pat Coogan when it offered him two weeks ago following an “awesome” virtual visit with Ryan Day and the Buckeyes coaching staff.

The battle for a commitment from Coogan was going to be uphill from the start, but it ended on Wednesday night when the country’s No. 45-ranked guard committed to Notre Dame, the program that had long been the favorite for the 6-foot-5, 290-pound Coogan.

The Buckeyes are looking for at least two more offensive linemen in 2021.