Tristan Leigh has been near the top of the Ohio State recruiting list for a while now. (Birm/Lettermen Row)

The IMG Academy 5-star prospect picked Alabama, citing the Crimson Tide’s history of producing first-round NFL Draft picks at the tackle position as the primary motivator in a choice he called a “business decision.”

And with Latham’s announcement, Ohio State received an unnecessary reminder of exactly why there’s usually a handful of players on the recruiting board at each position. There had no doubt been a lot of time spent cultivating a relationship with new Alabama verbal, but the Buckeyes didn’t put their proverbial eggs in one proverbial basket. And, no, they didn’t count any proverbial chickens before hatching, despite reasons to feel very good about where they stood with Latham just two months ago.

But the list of known commodities for Ohio State is shrinking. A program as elite as the Buckeyes can’t go too far down the big board as it looks to replace misses like Latham, so the names Greg Studrawa has been turning to in recent months aren’t new. There are, however, some of those top remaining names that aren’t going to be on the board much longer.

Where do things stand right now with the Buckeyes top remaining offensive line targets in the Class of 2021? Lettermen Row is running down the options. 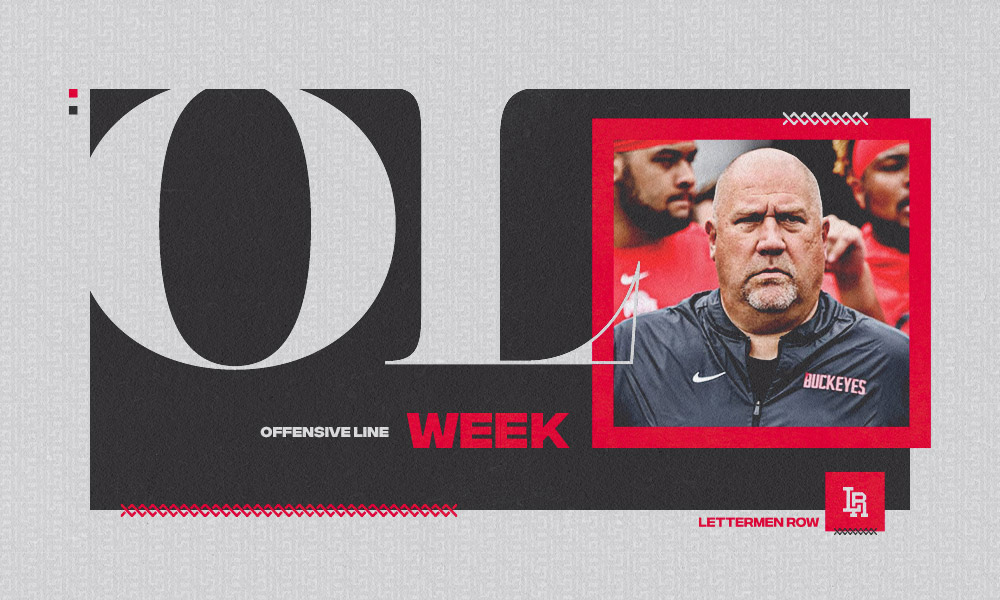 He’s been laying low for a while now, but there’s been some definite smoke of late when it comes to the recruitment of Tristan Leigh. The country’s No. 3-ranked offensive tackle prospect had long been considered a Clemson lean, but there’s been a stirring of momentum in the direction of both LSU and Ohio State. There’s no plan for a decision and the Buckeyes are hoping that Leigh’s willingness to delay until official visits can happen will keep them in the game as they keep growing the relationship.

Garrett Dellinger will decide this week

Another recruitment that will likely wind up being a decision between LSU and Ohio State, Clarkston (Mich.) 4-star offensive tackle Garrett Dellinger is making his college choice on June 24. The Tigers are the expected winner, but Studrawa and the Buckeyes did their best to make up a lot of ground in recent weeks. It isn’t likely to be enough though to sway the 6-foot-5, 280-pound lineman.

Top guard targets for Ohio State are pushing back decisions

One of the things that makes the Buckeyes offensive line recruiting in 2021 so challenging is that both of their current line commitments, Ben Christman and Donovan Jackson, are capable of playing on the interior of the line or outside at tackle. So, it’s not entirely crystal clear what position Ohio State is hoping to supplement their verbals with at this point.

There’s no doubt that the Buckeyes have prioritized offensive guard recruit Jager Burton throughout the recruiting process, and that is continuing in earnest despite the belief among many that he’s now favoring the chance to stay home and play at Kentucky. Alabama, Clemson, Oregon, Penn State and Ohio State are going to be the schools that continue pushing for his eventual commitment, a decision that will no longer happen in August as he’d been been planning for months.

Burton isn’t the only top guard prospect delaying his decision, either. Dellinger’s teammate at Clarkston, Rocco Spindler, has also pushed back a decision indefinitely after initially leaning toward a summertime announcement. For the Buckeyes to wind up Spindler’s choice, there’d need to be some serious shaking up of his top-schools list. But the thing about recruiting is that anything can happen when time is available — and right now, there’s time for Ryan Day, Greg Studrawa and the Ohio State coaching staff to keep working.

That’s good news as the Buckeyes look to secure another lineman or two in 2021 from their early favorites.

Who else is still possible for Ohio State in 2021?

This is where things get very interesting for Ohio State and everyone else in college football. There’s no position in the game harder to evaluate than the offensive line, and though it sounds like a broken record to write it again, losing the highly valuable summer camp circuit is a major blow to schools and players around the country.

To find names beyond the big, nationally known players listed above, the Buckeyes will have to rely heavily on senior film. Because of that, there’s not going to be a lot of movement to find the next wave of player until the fall, presuming football finds a way to get back to normal. If not? Then Ohio State is going to be forced to rely on junior film and years-old evaluations.

So stayed tuned there, I guess. There’s a lot of things to still unfold from now until signing day.