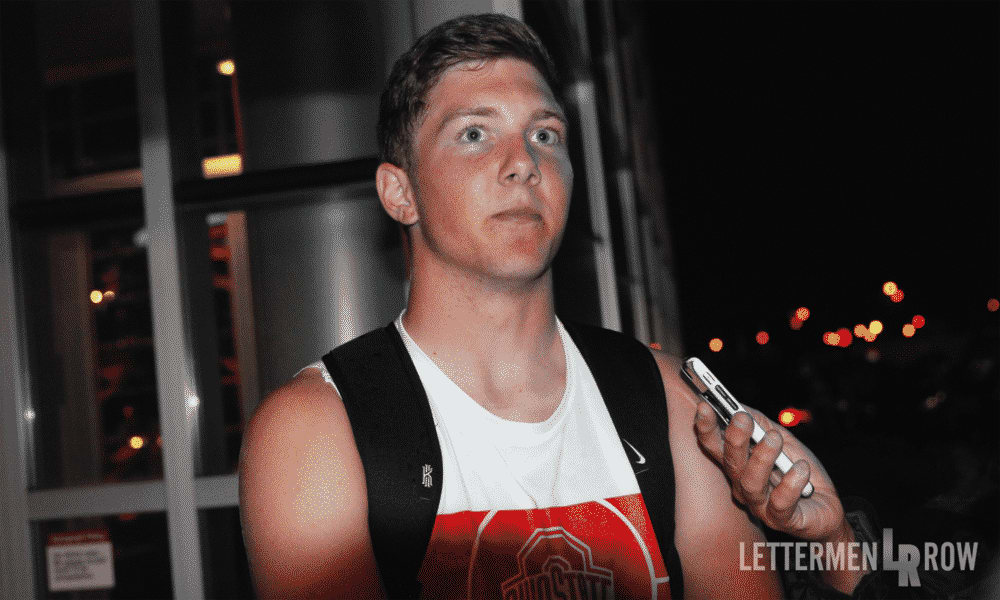 COLUMBUS — Though it wasn’t under the bright lights of Ohio Stadium as it was intended to be, there may still be plenty of fireworks coming out of Ohio State and its Friday Night Lights camp.

An event that is usually held as an open event for the public, FNL was moved to the indoor fields at the Woody Hayes Athletic Center because of the threat of severe weather and subsequently closed to fans and the media.

But it was open to recruits, and though there was limited opportunity to gather information, here’s a smattering of the night’s most important events.

Dwan Mathis is in Columbus, but so is Brian Maurer

Though he didn’t camp at Ohio State on Friday, it was just about 9:30 p.m. when Michigan State commitment Dwan Mathis walked out the front of the Woody Hayes Athletic Center into a small group of media members gathered to try and catch up with recruits post-event.

The de facto leader of Michigan State’s recruiting class, Mathis is a player that Ohio State has courted for months despite his verbal to the Spartans. His visit to Columbus, an official visit, certainly provides an interesting twist to the Buckeyes 2019 recruiting options at quarterback.

Interesting why? Because Ocala (Fla.) quarterback Brian Maurer is in town as well, and by all accounts he was excellent on Friday night throwing the football and really impressed the Ohio State coaching staff. Despite impressing Ryan Day and the rest of the Buckeyes coaches, Maurer left Friday night still unsure if an offer was coming his way. On Friday, I wrote that if Maurer leaves Columbus without an offer, it should be taken as a sign that Ohio State feels good about its situation elsewhere –— my way of trying to hint that something else was coming.

If the Buckeyes do not move on Maurer this weekend – and by that I mean offer and make him their priority moving forward – you have to assume its because they have another player in their sights that they feel better about than anyone else is aware of. They are not going to skip a quarterback in the class and Maurer is a really talented kid. He will not leave Columbus without an offer unless there’s another talented kid Ohio State feels confident about.

However, Maurer has not yet left Columbus – he’ll return to meet with Urban Meyer and Day again the morning – so it remains to be seen exactly where things stand. Maurer was clear in his ten-minute talk with the media that if no offer comes soon, he won’t be waiting around for it.

My prediction is that Ohio State will offer Maurer on Saturday, because I believe that puts a little pressure on Mathis that says “If you want to flip, you better do it soon.” I don’t think Mathis would be taking this visit to Columbus right now unless there was a real chance of that happening, because it’s absolutely going to sour his relationship in the short term with Michigan State. In the best case scenario, say yes to either him or Mathis, whichever one wants to commit first, if either does.

Moving on to the Class of 2020, quarterback Jack Miller has been talked about a lot over the last few days as a player that would likely commit to Ohio State this weekend.

At this point, it’s not likely to happen on the weekend, but if you talked with Miller like we did after the camp, you’d have thought he was the fourth little pig with how much he said “we, we, we” when talking about Ohio State.

“I’ll choose pretty soon,” Miller said. “We’ll see, for sure. Next week, next month, probably pretty soon though. The culture, the coaching staff, the great players they draw in. They’ve got a great program going on.”

Miller’s commitment may be looming, but his family had already planned a visit to Alabama and the commitment that they made to Nick Saban’s staff was one they didn’t want to break.

On the field, according to multiple people I spoke with, Miller was very good throwing the football. His arm strength and mechanics have never been an issue, but he showed on Friday that he’s a fierce competitor and a player that Ohio State thinks they could build around.

If this recruitment isn’t over by the end of next week, I’ll be very surprised.

New offer along the defensive line

Hunte had the chance to work with Larry Johnson at a satellite camp a few weeks back, and said that the opportunity to spend time with him again is an incredible experience.

“It’s Larry Johnson,” he said. “You hear ‘Larry Johnson,’ one of the best [defensive] line coaches in college football history. I would assume you’d take into consideration Ohio State, you should come here. Imagine three years, four years, five years [under his coaching.] Getting the offer here was definitely special.”

The Buckeyes will be one of a few schools that get an official visit from him this fall.

“It’s a game-changer, but not a game over,” Hunte said of the offer. “I’ve got to give other schools a chance.”

Other notes from Friday Night Lights