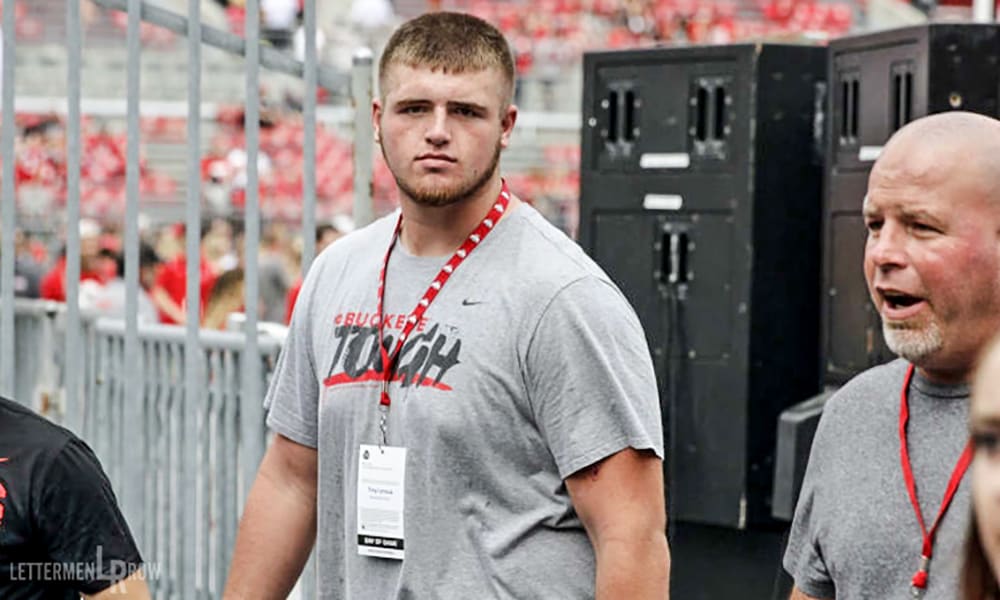 Norwalk lineman Trey Laroux is a big-bodied offensive tackle prospect in the Class of 2020. (Birm/Lettermen Row)

Ohio State added its seventh commitment in the Class of 2020 when Trey Leroux, a 3-star offensive lineman from Norwalk High School picked the program.

Who is Trey Leroux? What makes him special? What are the Buckeyes getting with this future offensive lineman? Let’s find out.

What Trey Leroux gives Ohio State on the field

The first noticed about Trey Leroux is that he’s big — really big. Leroux is a solid 6-foot-8 and in the 320-pound range as a high school junior. He’s a young man who has the frame most schools are looking for in an offensive tackle, and he’s just beginning to scratch the surface of what he can turn himself into.

There’s a tendency for young players in his mold to be complacent because of the size and strength discrepancy between them and the majority of their opponents. That didn’t happen for Ohio’s 38th-ranked prospect throughout last season, and in fact, Leroux’s game tape improved markedly from the start of his junior year to the end of it. For anybody looking for a reason why he was offered now rather than making him wait through another few months of relationship building and evaluation, that’s one of the factors. Ohio State has seen development happening already, and his body type projects quite well for a good collegiate strength staff — and the Buckeyes strength staff is more than just good.

Right now, it’s that frame and natural strength possessed by Leroux, who wrestled earlier in his high school career, has working in his favor. He’s got some tree-trunk legs and is athletic enough to do the full splits, according to his high school coach, Todd Fox.

“He’s got an unusual ability to keep going 100 percent,” Fox told Lettermen Row. “He doesn’t really fatigue as much as we thought — or expected him to for a kid his size.”

In college, though, everyone is big and everyone is strong. So for Leroux to find his way to the field for Ohio State, he’s going to need to continue to improve his lateral quickness and his upper-body strength, but he actually does a nice job maintaining leverage and staying low considering the size advantage he enjoys in high school.

“He’s just a massive human being,” Fox said. “But he can move. I’ve got video of him doing a 39-inch box jump. You shouldn’t be able to do that at his size. I think coaches, seeing that, that’s what has them deciding to offer now.

“He’s focused on getting better. He’s a kid that works hard and there’s no slacking. Everything is possible for him.”

With Leroux in the fold, Ohio State can now turn its focus almost entirely to a handful of out-of-state star lineman to finish out what is a vital year of recruiting for the offensive line.

The fourth offensive lineman committed, Leroux joins 5-star offensive tackle Paris Johnson, 4-star center Luke Wypler and 3-star guard prospect Jakob James as future “Slobs” for position coach Greg Studrawa and Ryan Day. Leroux is a pure tackle, but he’s a prospect that will need a year or two of seasoning at least. His addition won’t impact how aggressively Ohio State chases some other tackles that it has prioritized for months like Kansas 4-star Turner Corcoran and Kentucky’s John Young among others.

The Buckeyes will still look to add at least two more offensive linemen. Expect one pure tackle in that group, and then Ohio State will take its best swing at big-name prospects like 5-star Justin Rogers or 4-star Geirean Hatchett among a host of other possibilities at guard.

What else do you need to know about Trey Leroux?

Leroux’s father is a Michigan football fan, and that made his decision harder than might be expected despite growing up in Ohio. He had been very close to making a commitment to Purdue as early as January, but he decided to hold off on committing because he had been hearing so much from Michigan’s Ed Warinner — and believed waiting to make a decision could help the odds of landing a Wolverines offer.

A former wrestler, Leroux decided to stop participating in that sport because he’s simply gotten too big to compete in high school. He would have been forced to lose almost 50 pounds in order to be eligible as a heavyweight participant as a senior. He still intends to compete in track and field, where he was a regional qualifier throwing the shot-put and the discus as a sophomore. Leroux played at Monroeville High School his sophomore season.