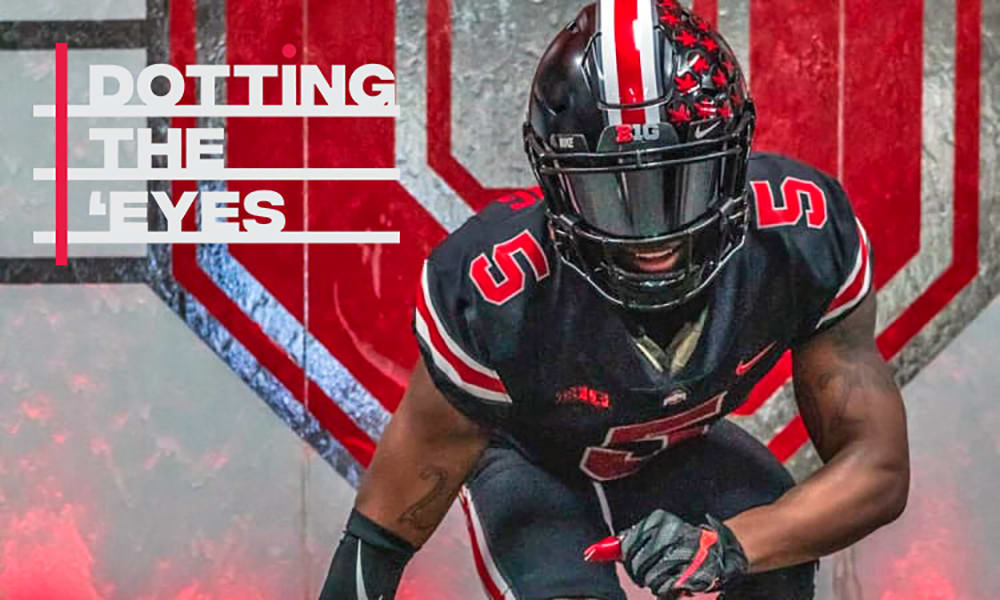 Ohio State commit Mookie Cooper is waiting for a decision on whether or not he'll play during his senior year. (Mookie Cooper/Courtesy)

Stay in touch or be left out because Ohio State recruiting is a 24-hour, seven-day-per-week obsession. What’s the latest news as the Buckeyes build for the future? Get that and more Sunday through Thursday on Lettermen Row. Wednesday’s notebook catches up with North Carolina running back Evan Pryor and a pair of 2021 offensive line prospects with Ohio State interest.

The talented slot receiver was one of the best performers at The Opening in Dallas in July. And while in Texas, Cooper announced that he was closing in on his college decision, which he announced a week later. That choice was Ohio State, where he and his mother visited at the end of that month and left feeling pretty good about everything in front of him.

Cooper, the nation’s 13th-ranked receiver prospect, had things turn upside down on him a short while later when he decided he wanted to enroll early at Ohio State and would need to leave Trinity Catholic (St. Louis) t0 do it. He’s seen his former high school work against his efforts to advance his career and has now enrolled at Pattonville Senior High School, where he awaits word on if or when he’ll be permitted to play football this season. Cooper is hoping for some resolution on that matter this week.

“They’re trying to see if I can play this week,” Cooper told Lettermen Row on Wednesday morning. “They’ve sent my transfer stuff to the state, I think on Tuesday, and they’re just waiting for a response.”

Missouri isn’t the only state in the country that has an issue with players transferring high schools — usually away from parochial institutions where there are different requirements needed for graduation to public schools. Cooper’s situation isn’t too unlike the one Paris Johnson found himself in at the end his junior season, when he opted to leave Cincinnati St. Xavier for Princeton High School.

The biggest difference here is that Cooper’s plans were not as concrete or made as early as the 5-star offensive tackle who he’ll play alongside in college. Those two will get a chance to meet up this weekend when Cooper heads to Columbus for his official visit with the Buckeyes.

“Man, you don’t know how excited I am,” Cooper said. “If I am not playing this weekend, I’ll leave to go there on Thursday night. I’m just happy to be a part of Ohio State still. That’s the bigger picture.”

Here’s hoping that the people in Missouri do the right thing and allow Cooper to get back on the field for his senior season of high school football.

We wrote about it here on Monday, but it still appears that the official visit for Little Elm (Texas) defensive back Ryan Watts III remains on the docket for this weekend at Ohio State.

Watts is a much more realistic option to wrap up the defensive back recruiting in the Class of 2020 for the Buckeyes than a guy like Elias Ricks. And the fact that the Oklahoma commitment is intent on making this visit — during his own off week, meaning it was done almost as soon as possible — shouldn’t be dismissed as just coincidence.

There’s a real interest here from both sides. If the visit does happen, don’t be entirely surprised if things quickly turn in the Buckeyes direction in this recruitment. Watts took his official visit to Oklahoma back in April. Ohio State, Penn State, Texas A&M and a host of other big-time programs are still trying to flip the 6-foot-2, 190-pound cornerback away from the Sooners.

Twice this summer Caleb Rodkey, a 2021 offensive lineman from Missouri City (Texas) Ridge Point High School, visited Ohio State. He has family in Northeast Ohio and was first noticed by the Buckeyes in the spring. He then made a visit to Columbus in June for a one-day camp, returned a week later for a two-day stay with the Ohio State coaches and is taking in as much of their tutelage as he could.

The 6-foot-5, 320-pound lineman enjoyed the visits and the experience in general with the Buckeyes.

“[Offensive line Greg] Studrawa made comments that I was standing out,” Rodkey said. “He gave me a high-five a few times. I was super pumped and couldn’t wait to get back to the weights and the offseason training.”

Since that trip, Rodkey has stayed in contact with Ohio State and has set up his next visit to Columbus.

“I had a good conversation with [Ohio State tight ends coachKevin] Wilson,” he said. “It looks like I’ll be up there for the Wisconsin game.”

Rodkey is also set to visit Colorado this season, and he camped at Wisconsin in June as well. He’s currently an unranked prospect, but his frame, Ohio roots and strength make him an intriguing prospect to continue watching as a potential interior lineman candidate.

Analyzing top in-state prospects for Buckeyes in Class of 2021
Ohio State: What is allowed on an official visit versus unofficial visit?
Advertisement