Connect with us
Matt Barnes is very serious about football. (Birm/Lettermen Row)

Ohio State football recruiting can be a wild ride full of twists and turns as recruits from all over the country maneuver their way to signing day. Lettermen Row is here to help navigate the tumultuous roads by getting to the heart of the matter with the young football players and Ohio State coaches and staff members themselves. Today’s guest is Ohio State secondary coach Matt Barnes.

Since arriving at Ohio State prior to the 2019 season, Matt Barnes has remained relatively low-key despite a few pretty hilarious early Twitter appearances that really showed his personality.

It’s an approach that mirrors his coaching style. He’s not interested in making things about him, preferring the conversation to focus on the game he eats, sleeps and breathes. Barnes listens more than he talks, but when he talks it’s almost always about football.

That’s one of the reasons why Ryan Day decided to hire Barnes two offseasons ago, making him the final coach on Day’s first staff. It’s the same reason why Day, when faced with the retirement of long-time coaching veteran Greg Mattison, felt no hesitation in promoting from within because that move would be the way Matt Barnes would get to put more of his impact on the Buckeyes football team. His coaching versatility made him the natural choice to step up for Ohio State.

“Once Greg decided he was going to retire,” Ryan Day said in early February. “The thing that came to me first off was that Matt Barnes really has done an excellent job on special teams and he’s got a background on defense. I think he’s a great young coach.” 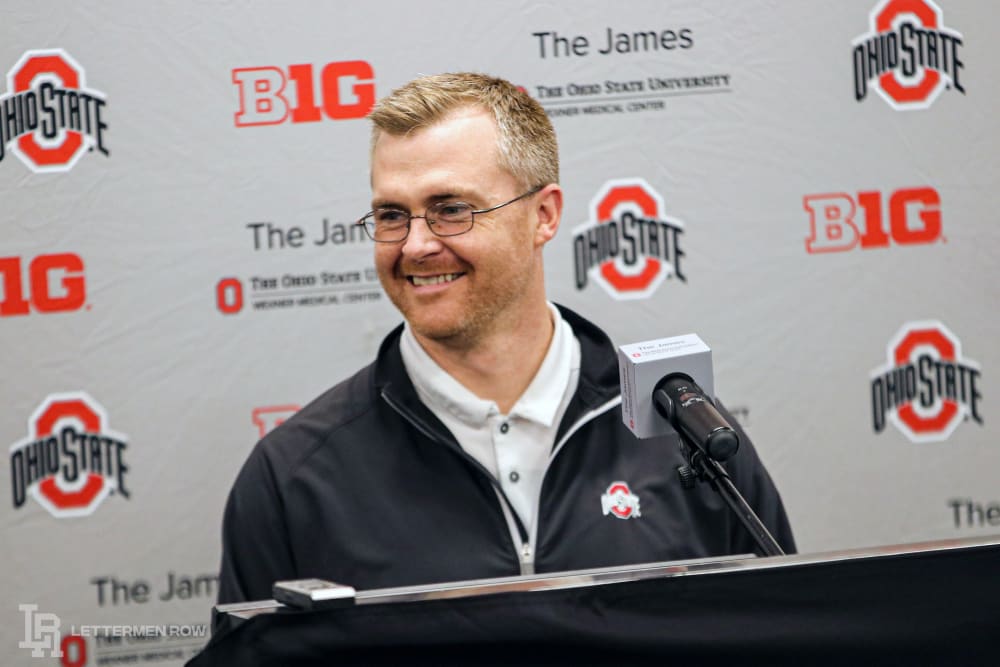 Ohio State assistant Matt Barnes will have more responsibility in the secondary in 2021. (Birm/Lettermen Row)

And Barnes has proven that over the last decade. He’s also proven to be a valuable recruiter for Ohio State, helping bridge the gap between Jeff Hafley and Kerry Coombs and serving as an important piece of the puzzle in building the 2021 Buckeyes recruiting class.

“Barnes was very important during the transition from Hafley to Coombs — he did an outstanding job of maintaining relationships with our commits during the transition,” Ohio State director of player personnel Mark Pantoni told Lettermen Row. “And he has been doing a great job with the 2021 class in his area and assisting Kerry with the defensive back prospects. He works very hard and has great chemistry with the staff.

“Being a younger coach and new father, he does a great job relating and connecting with prospects and their families.”

Who has shaped Matt Barnes as a football coach? What was the biggest adjustment he had to make coming to Ohio State? Why doesn’t he take more credit for his success? Does he ever tell recruits what the Draddy Award is? The young Buckeyes coach joins Birminology to talk those things and more.

Continue Reading
You may also like...
Related Topics:Featured, Matt Barnes