Marvin Harrison was blown away by his spring-time visit to Ohio State. (Birm/Lettermen Row)

Ohio State football recruiting can be a wild ride full of twists and turns as recruits from all over the country maneuver their way to signing day. Lettermen Row is here to help navigate the tumultuous roads by getting to the heart of the matter with the young football players themselves. Birminology shows who the young men being recruited by Ohio State truly are — by talking to them. Today’s guest is Marvin Harrison Jr. who has made his college choice.

Harrison, a 6-foot-4, 190-pound standout at Philadelphia (Pa.) St. Joseph’s High School, first visited Ohio State for a junior day event in February. Then he quickly set up a return trip to the school for a pivotal visit in April as the Buckeyes hosted their annual spring football game. It was that visit and the chance for Harrison to develop a solid relationship with Hartline in person that carried his interest over the summer months when communication was scarce because of NCAA rules. 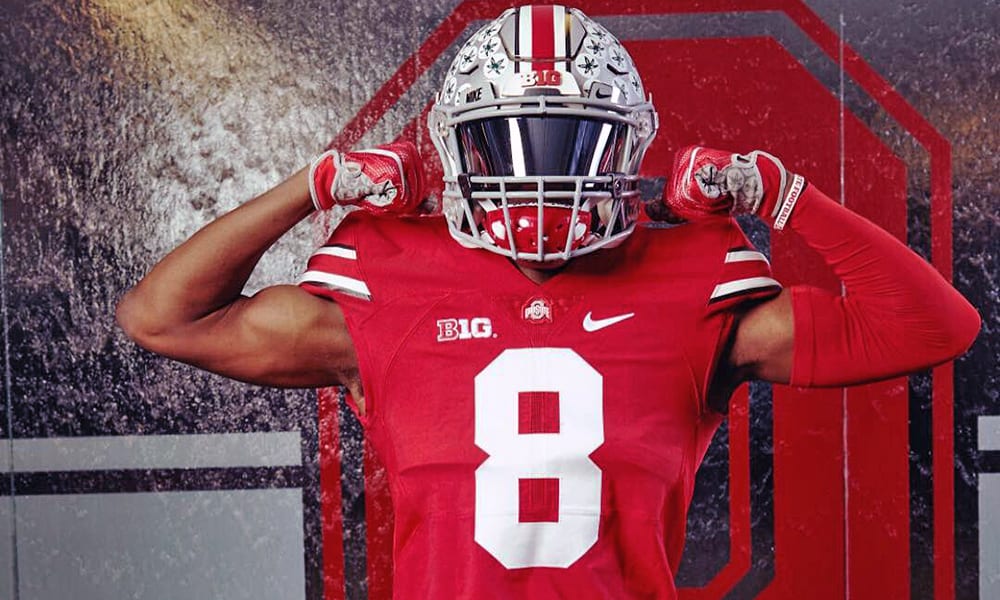 Though Harrison himself didn’t return to Columbus after that April visit, his father — the NFL Hall of Fame receiver of the same name — did make time to visit the Buckeyes. And the elder Harrison found himself similarly impressed with Hartline and the comprehensive nature of the Ohio State football program.

Once his father was on board, it seemed only a matter of time before Pennsylvania’s fifth-ranked 2021 prospect would make a decision to join his St. Joe’s teammate and quarterback Kyle McCord by pledging to the Buckeyes.

McCord’s process obviously wrapped up first as he issued his verbal commitment to Ohio State in May. But after trips to Clemson and LSU in the last few months, Harrison has decided to put his recruitment behind him as well and focus on the one school that had been the leader all along: Ohio State.

Why did Marvin Harrison Jr. commit to the Buckeyes now? What’s drawn the talented wide receiver to Brian Hartline, Ryan Day and Ohio State? Find out those answers and more in this special commitment edition of Birminology on Lettermen Row.