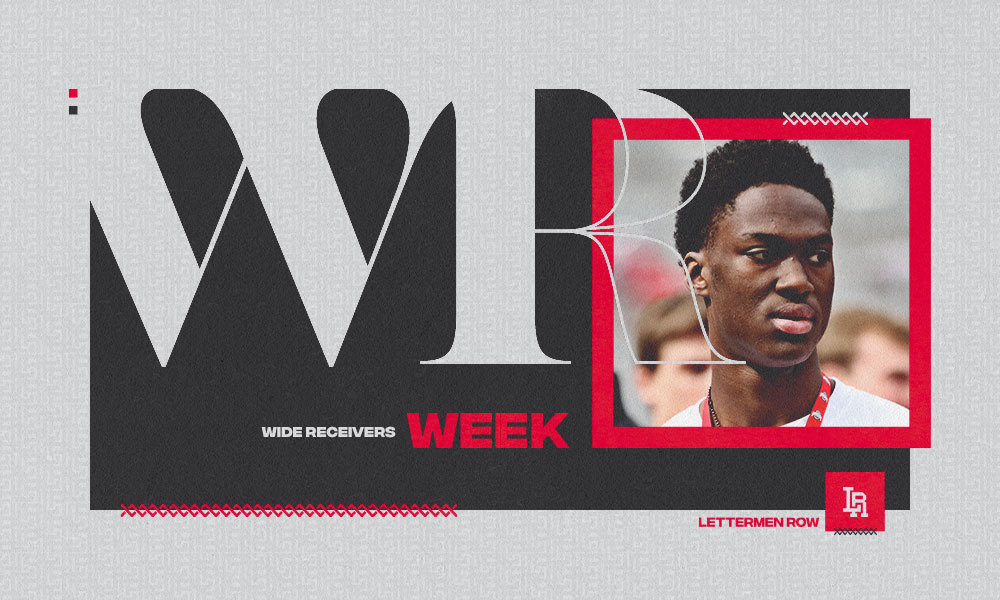 The Ohio State commit thought it was a pretty nice ring.

In the Harrison household, it’s fine to talk about football. It’s unusual to talk about personal successes. Still that one glimpse at that ring and its 50 shining diamonds? That’s enough fuel to light a young football player’s fire.

“He saves it for special occasions,” the younger Harrison told Lettermen Row. “We were on our way to a Colts game and there was a ceremony. I guess special occasions don’t happen that often. All it did was motivate me to get more rings than he got.”

For many children of highly-successful athletes, the prospect of following in their parent’s footsteps is daunting. Marvin Harrison wants that pressure.

“I think that’s what made me fall in love with football, honestly,” Harrison, who committed to Ohio State last October, said. “Every time I’m out there on that field I have something to prove. It brings an edge and competitiveness to my game, because everyone wants to take their best shot at me and put me on their highlight tape.

“I have to be at my best every single play, and I’ve embraced that. Mentally, when I’m on the field now, I’ve grown from being the one being hunted to wanting to be the hunter, coming at my opponent.”

According to Tim Roken, Harrison’s coach at St. Joseph’s Prep in Philadelphia, that instinct is a natural byproduct of what he saw growing up.

“I think growing up around football and some of its best-ever players, it’s hard not to fall in love with the game,” Roken said. “Man, you talk about 10,000 hours and mastering something. The number of mental reps he’s had as a child and through the years? He most likely didn’t realize then as a child as he understands now how much dad’s practices or games were helping him develop mentally at that time.”

Harrison is a 4-star prospect, although in the recent a re-ranking by 247Sports.com he dropped more than 120 spots — yet another motivational tool if he wants it. His game, like his father’s, isn’t built on being a burner. He’s a technician and a route runner well-beyond his years, but needs to grow into his frame still. He’s not going to dominate games the way that players like Julian Fleming have, and that’s what rankings experts often rely on.

But the things that made his father a first-round pick when he came out of Syracuse in 1996? Those are things his peers don’t have. Hell, those are things his father didn’t have when he was learning the game, and the younger Harrison gives his dad credit for that, even if he busts his chops about it, too.

“I was much bigger than him at this age, but I think he may have had the speed over me — but not by a lot,” Harrison said with a laugh. “And honestly, I think I’m more technically sound than he was at this point but that’s because I had him to teach me.

“He’s always going to tell me what I did wrong and what can be better. I’m sure he sees something in me and the potential I have but that’s not something he’s necessarily going to say all the time. He wants the best for me and for me to be the best player I can be.”

If that’s the goal, following in his father’s footsteps isn’t a bad plan. But according to fellow Buckeyes commitment and teammate Kyle McCord, it’s easy to see that his go-to-receiver is working to make his own name.

“He never lets what his dad did get in the way of his goals,” McCord told Lettermen Row. “I honestly think what his dad did motivates him to be even better and he has the ability to do that.

“That’s a scary thought, but it’s true. He has all the tools.” 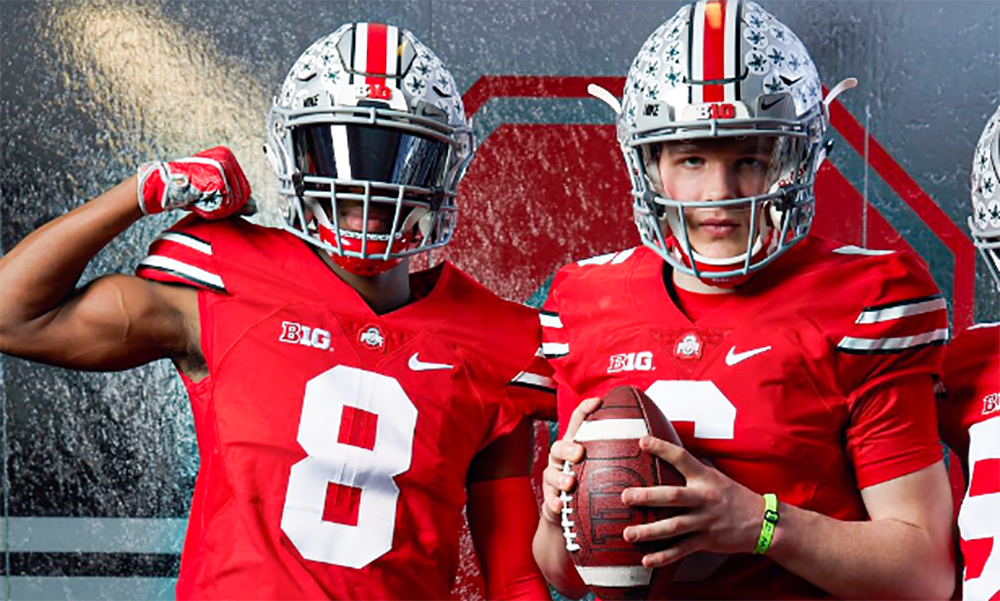 Marvin Harrison and Kyle McCord have grown accustomed to winning together. (Kyle McCord/Courtesy)

One area where Harrison has been working to improve his personal toolbox is in the locker room. Like his father, he’s soft-spoken and reserved. He works hard and leads by example, but he knows he has to become a better, more vocal, leader.

“Vocal leading is something that I’ve really had to learn and am still improving today because I’ve always been a lead by example kind of guy,” Pennsylvania’s No. 6-ranked prospect said. “I’m being more vocal with my teammates, but I’m not too comfortable with standing up in front of the team or the offense and leading that way, but I am with one-on-one conversation, which is new to me.”

McCord doesn’t dispute that but reiterated that there’s never been a concern about Harrison’s ability to lead. He’s ready to go full-speed for his teammates, no matter what.

“Marvin is a great leader for us,” McCord, who has teamed up with Harrison to win back-to-back state championships, said. “All the guys look to him. He never stops working and always leads by example. People don’t see it always, but he’s super competitive. He’s always on go.”

Roken see that, too.

“He works consistently each day to better himself as a young man and develop his craft on the field,” Roken said. “I’m more impressed with him every week in our leadership council meetings. He always has a smile on his face, a positive mindset and it spreads throughout our team.

“The vocal part comes naturally for some, but it grows in many more. I think Marvin has grown into that role for us more this offseason and will bring that with his relentless work ethic.”

The bloodlines Harrison has, his ease of motion and precision route-running combined with a calm and confident demeanor are what caught the attention of the Buckeyes recruiting staff. The receivers already at Ohio State being built the same way is why Harrison never wanted to play anywhere else after visits to Columbus last year. 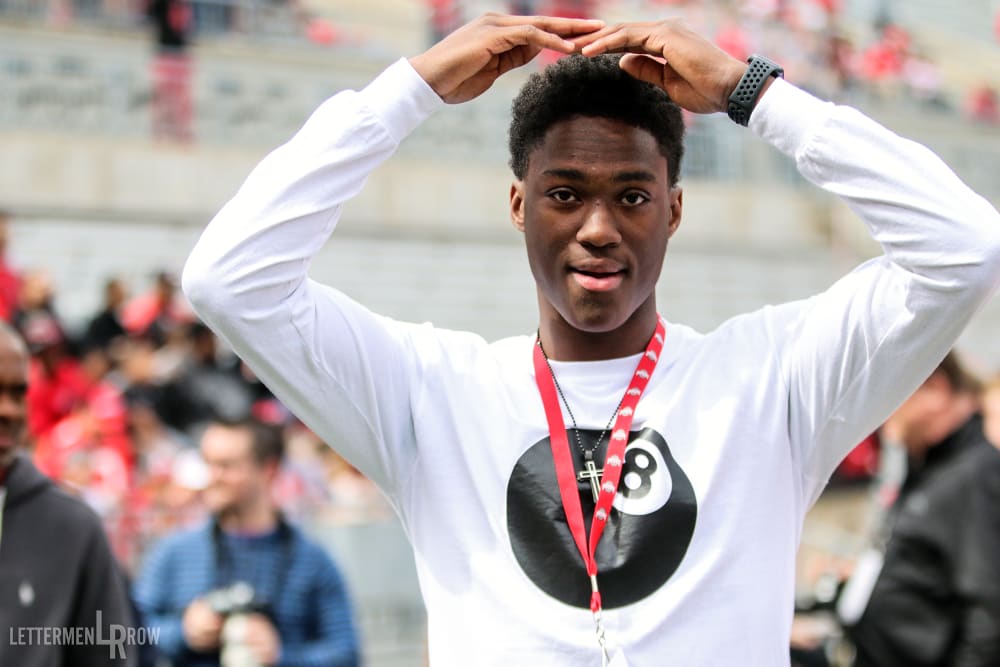 Marvin Harrison wanted to play for Ohio State from the minute he stepped onto campus for the first time. (Birm/Lettermen Row)

“It’s a credit to the coaching staff,” Harrison said. “It’s the kind of players that [wide receivers] Coach [Brian] Hartline is looking for at our position. Of course, he wants a great football player, but I know he also wants great people.

“And our whole receiving room is like that and has that mindset of: ‘We’re going to do everything and anything that is asked of us to help the team win games.'”

Ohio State does want great football players, not just great receivers. Harrison has the capability to be both. He knows he could have picked an offense that throws the ball more, but his only goal is to be better. He’s watched as Michael Thomas, his favorite current receiver, grew into a total package at wideout in Columbus.

“My dad played a role in that,” Harrison said. “From being around his team sometimes, I got to really witness and understand how everyone has to work together for it to be successful. And that has just stuck with me throughout my career.

“I think receivers are too worried about their numbers. How many yards did you get? How many catches do you have? Everyone wants to have a big game, but I play the game to win and am willing to do whatever is needed. Football is a team sport, not one person should be in the spotlight.”

There’s a spotlight on Marvin Harrison, though. No matter what. His father is in the NFL Hall of Fame and he’s chosen to create his own legacy at one of the country’s truly elite football programs. Is he ready for that sort of push into the bright lights?

“I’ve been in the spotlight my whole life playing football with who my dad is. You always have a target on your back,” he said. “This is what I’ve grown accustomed too. I’m going to do my best to represent Ohio State and my family. I definitely look forward to being on that stage. That’s what it’s all about.”

Marvin Harrison isn’t backing down from expectations. He’s running toward them. No pressure, no 50-diamond rings, right?