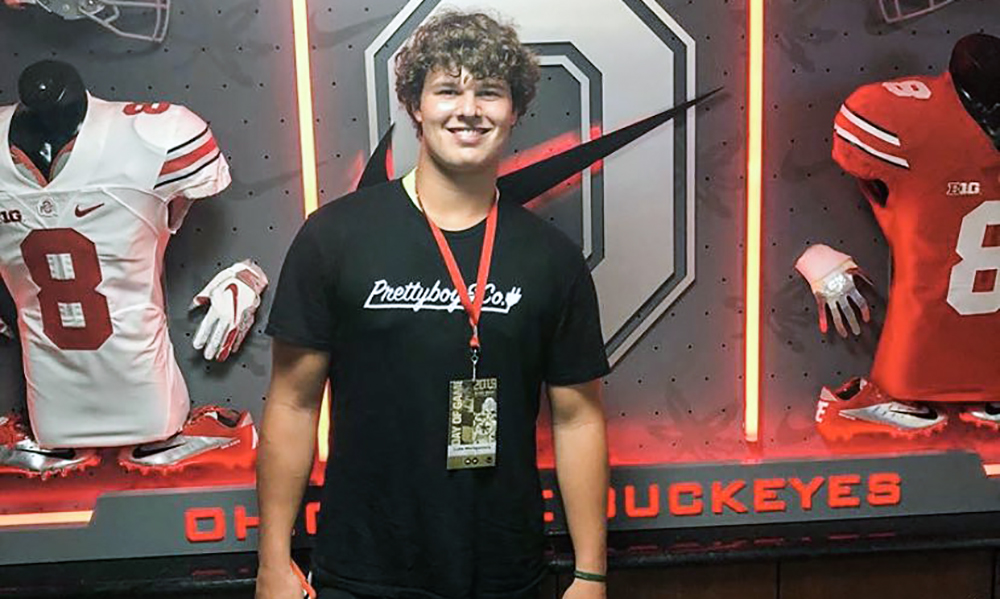 Luke Montgomery made a couple visits to Ohio State before the pandemic shut down all in-person recruiting. (Luke Montgomery/Twitter)

The 6-foot-5, 260-pound sophomore announced his offer on Twitter on Thursday afternoon.

“I am so shocked, at a loss for words,” Montgomery told Lettermen Row of the offer. “I really can’t express it, I’m so excited still. It means so much to me. Ohio State is one of the best schools out there for sure. To talk to Coach Day, Coach Studrawa and the whole staff. I’m shocked.”

The Buckeyes see Montgomery, who also excels on the basketball court, as a potential offensive tackle and he was offered by line coach Greg Studrawa. Some schools that have offered — he has 15 now — him as a defensive end, but his recruitment seems to heading toward the offensive line.  Penn State, Notre Dame, Michigan and others have begun emerging as a real threat for his eventual commitment, and the offer from Ohio State comes just about two weeks after Montgomery told Lettermen Row he was expecting a bit of a delay on the Buckeyes behalf.

“It’s probably because I am from Ohio,” Montgomery said of the wait for the opportunity from Ohio State. “They want to see me in person, all they’ve seen is me playing basketball.”

With the NCAA extending its recruiting dead period through the end of May, the chances for the Buckeyes to see Montgomery in person as an offensive lineman anytime soon are dwindling. It seems unlikely that there will summer recruiting camps at this point and so it will be vital for Montgomery’s continued growth to get a full off-season, and then an actual season, of work and experience along the offensive line. Consider it an offer betting on his big future.

“I’m more of a defensive tackle this year,” Montgomery said last September. “But there is no doubt I will be a monster on the offensive line in the next few years.”

After an offseason of weight training, he looks the part. Now he’s in a position to become an early leader of the Ohio State 2023 recruiting class.

Luke Montgomery joins Mentor defensive lineman Brenan Vernon and Pickerington Central’s Sonny Styles as in-state sophomores with offers from the Buckeyes. He has already begun building a close friendship Ohio State 2022 commitment Gabe Powers and says he will be working out with Vernon when the weather turns back to spring.

Continue Reading
You may also like...
Related Topics:luke montgomery