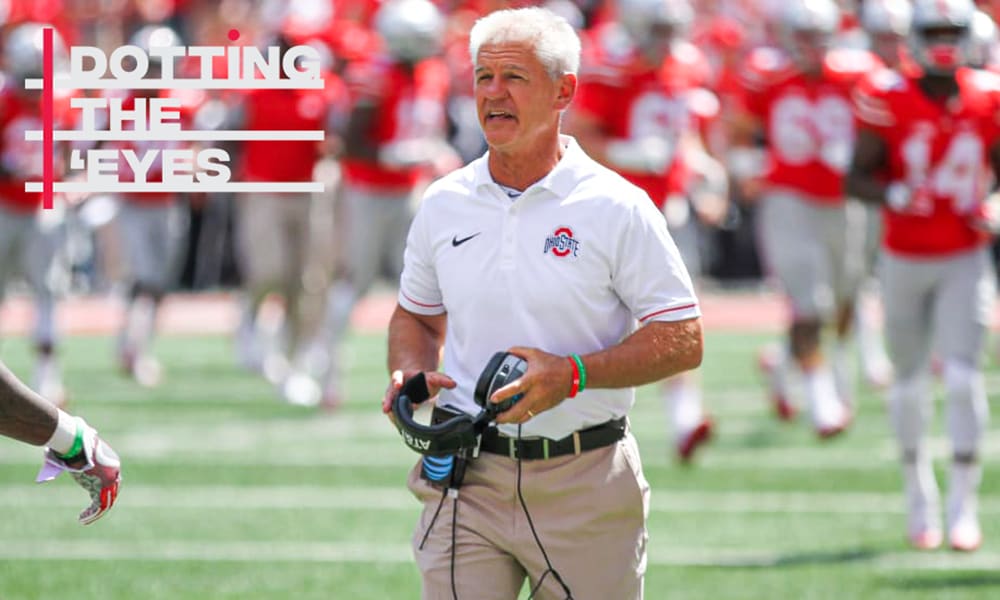 Ohio State defensive coordinator Kerry Coombs is back with the Buckeyes. (Birm/Lettermen Row)

Stay in touch or be left out because Ohio State recruiting is a 24-hour, seven-day-per-week obsession. What’s the latest news as the Buckeyes build for the future? Get that and more Sunday through Thursday on Lettermen Row. Monday’s notebook looks at the reconnection between Ohio State and Kerry Coombs and the impact that could have Buckeyes defensive back recruiting.

When the news broke in mid-December that Jeff Hafley was leaving Ohio State for a chance to run his own program, it didn’t take long for Lettermen Row sources to mention the name of Kerry Coombs as a potential, probable replacement.

A centerpiece of Urban Meyer’s staff during his six years with the Buckeyes, Coombs was regarded as one of the country’s best cornerbacks coaches and teachers. Under his guidance, the Ohio State secondary emerged as one of the country’s best, producing a number of first-round NFL draft picks. Guys like Marshon Lattimore, Denzel Ward, Gareon Conley, Eli Apple and Malik Hooker ushered in the latest wave of NFL talents like Jeff Okudah and Shaun Wade.

And they all had one thing in common: Kerry Coombs recruited and coached them.

Coombs was a rock star on the recruiting trail for Ohio State, becoming a thorn in the side of opponents in Michigan, Ohio and the Southeast, including Atlanta and Florida. He was named the national recruiter of the year by Rivals.com in 2017 after helping land Jeff Okudah, Shaun Wade, Kendall Sheffield, Marcus Williamson, Amir Riep, Pete Werner, Brendon White, Isaiah Pryor, Blake Haubeil and Jerron Cage in that class.

Jeff Hafley did a remarkable job for the Buckeyes in his one year in Columbus, and his departure presented a unique challenge for Ohio State. But the addition of Coombs provides a more-than-adequate replacement on every level of the decision. He’s as respected as any coach who has stepped foot into the Ohio State program in recent years, and that is across the board — by fellow coaches, parents, players and people he’s met on the recruiting trail.

What role Coombs plays on the recruiting trail is up in the air from here. But it seems likely that he’ll once again handle recruiting in Michigan, Southwest Ohio and Florida, where he excelled in the past. Hafley was able to essentially handpick his cornerbacks in the Class of 2020 and then go recruit them wherever they were, and there’s no reason to think Coombs won’t be granted the same liberties. 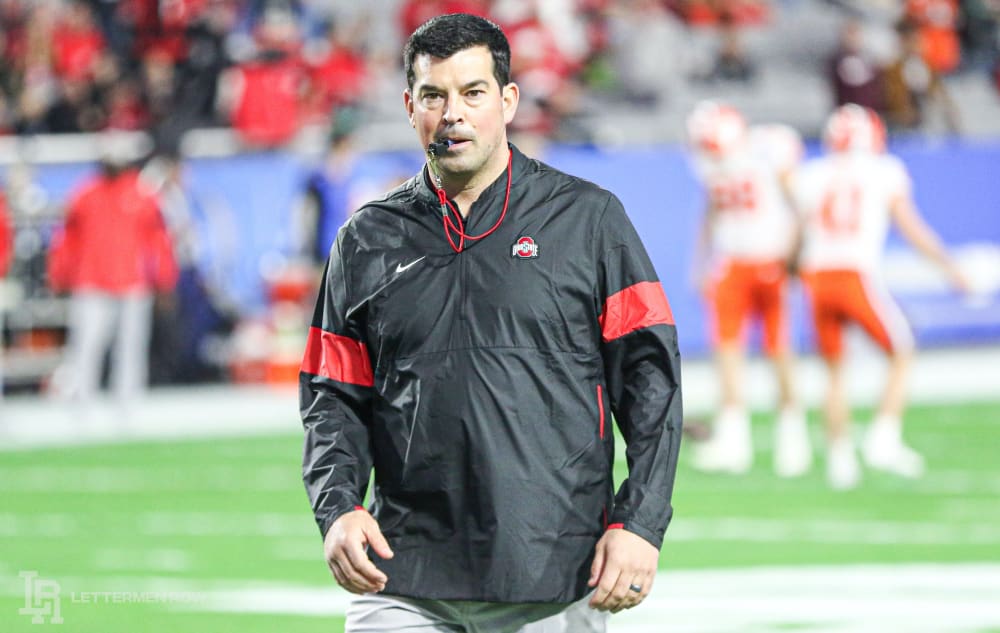 Ryan Day once again proves himself to recruits, families

In his first year as the coach at Ohio State, Ryan Day was more than once put into a position that no one wants to be in. He had to look recruits and their families in the eyes and tell him exactly what he was going to do — and then he had to actually go out and do it.

It started when he told them he’d find defensive coaches a year ago that would reset the standard at Ohio State. He hired Jeff Hafley to run the Buckeyes defense, a coach even the players had never heard of, and it turned out pretty well. When Hafley left, he knew the standard couldn’t change.

“Going to do the same thing again next year, go get the best there is,” Day told the media following Hafley’s departure. “You call around to different people that you respect. But usually, the people you bring in are people that you know really well and you trust.”

Trust is the operative word in this equation, and it’s so much a part of the program that Day is trying to build and maintain in Columbus.

“Ryan Day told us that he’d be finding the best coach in America,” C.J. Cavazos, the father of Buckeyes early-enrollee Lejond Cavazos told Lettermen Row shortly after Hafley’s departure became known. “And we believe he will. We trust in Ryan Day. He said he’s going to do what’s best for the program. We believe he will.”

That trust paid off. Day’s desire to bring back Coombs is more proof of the young coach’s maturity. It’d have been very easy to let ego get in the way of hiring Coombs. A lot of coaches would have made it a point to hire their own guy rather than going back to a former assistant of his predecessor. But Coombs is a home-run hire for the Buckeyes, for Day, for recruits and for the current roster.

Day has continued to prove himself at every turn. By bringing back Coombs, he’s done it again.

Kerry Coombs will be back on the recruiting trail representing Ohio State quickly — and it could even be Tuesday if all the proverbial ducks get lined up in time. Though his previous success is well-documented, the next round of his Buckeyes career will be judged by the way he recruits in the future.

The biggest priority for Coombs will be Buckeyes 2020 commitment Cameron Martinez. Day visited the Muskegon (Mich.) 4-star on Friday and suggested that as soon as Hafley’s replacement could visit Martinez, they would.

While Coombs helped lead the Tennessee Titans to the AFC Championship game, Day and the Buckeyes staff made sure Martinez knew the energetic assistant coach was the hopeful replacement for Hafley, so there’s no doubt the Ohio State commit has been researching Coombs. Now the two will actually meet with the hope of ending any suspense from here to signing day.

Now, Coombs can go and visit with Martinez. If Ohio State wants to remove any lingering doubt in the mind of Michigan’s Mr. Football and his family, the 5-foot-11, 195-pound two-sport/two-way star for the Big Red will be among the first calls and first visits on Coombs’ to-do list.

The visit from Day “helped,” according to Martinez. But when it comes to finalizing his decision to sign with Ohio State on Feb. 5, the relationship and trust that gets built from now until then will tell the tale as Notre Dame, Northwestern and others hope to play spoiler.

He is a great recruiter and hopefully he will stay on the “new” wagon Hafley started rolling so we don’t fall back into 2018 defense again. Go Bucks and Go Coach Coombs.

interesting word choices, Scott: is the question whether we should be on or off someone’s wagon going somewhere in a direction? Or, what is the common relational standards Coach Day builds his staff and his team upon… anywhere, anytime?

One is some Conestoga made by men; the other asks ‘Who is the Chief Cornerstone’?

One is from the multitudes of “hopefully”s of men; the other is Our Hope.

Speaking of The Sure Way… LOL! GO Bucks!

Getting Coombs back in the mix is bigger than anything this offseason including recruiting!! This man is the master of the living room, the Buckeyes just got a lot better!! GO BUCKS

Doug: what is “bigger than anything?”

Who is “the” “master”? Anywhere, anytime?

Do we “get” a lot better… or are we given… The Helper… and set free to choose in this life?

===nb. I’m not trying to ‘tell’ you anything… i’m asking as this seems to me to be of First importance… to each and all of us, AND i’m seeking answers, not my usual forms of ‘wishful thinking’…. ;-{)}

Buckingham – is that ‘thee [only] fact’…or a fact among several in how and who our staff recruited players?

“After helping” is what the story says. Coombs didn’t handle every one of those recruiting efforts individually, but it’s true Schiano was very involved in Okudah. Tim Beck was actually very involved in both Okudah and Wade as well.

And Vonn Bell wasn’t written about in the story for that reason.

Coombs will stabilize it the same way that water stabilizes potassium. DB recruiting is about to catch fire!

Well, only if he stays put for more than a couple years.
That’s stable.
We need to,put a stop to all this movement.
So yes, he can “Stabalize” the recruiting, but only if he STAYS.
We have a tremendous group. But it has to settle down and stay together now. Look at Coach Johnson for example. Now that’s stable recruiting, and why?
Because he is there. He is stable, and that has brought these rewards. You keep these revolving doors going you never reach your best. Same for Coach Fickell.
How good was that, or Coach Myer ?
7 years man.
So yes he can. Maybe.

I believe Birm you meant “Stabalize” recruiting this year possibly.
Yes he definately will.
But my bigger point is this- and I’m glad you used the word Stabalize..
He surely can. But looking at the fruits of his being here for 6 YEARS straight, you see how it was.. So my whole point is hopefull the stays in palce again, for a long time, then it will be stable, and really good, just like it was before.thank you.

I dislike spell checker. Below, I meant to type..” Hopefully he stays in place again”, meaning for like 6 years or more again.