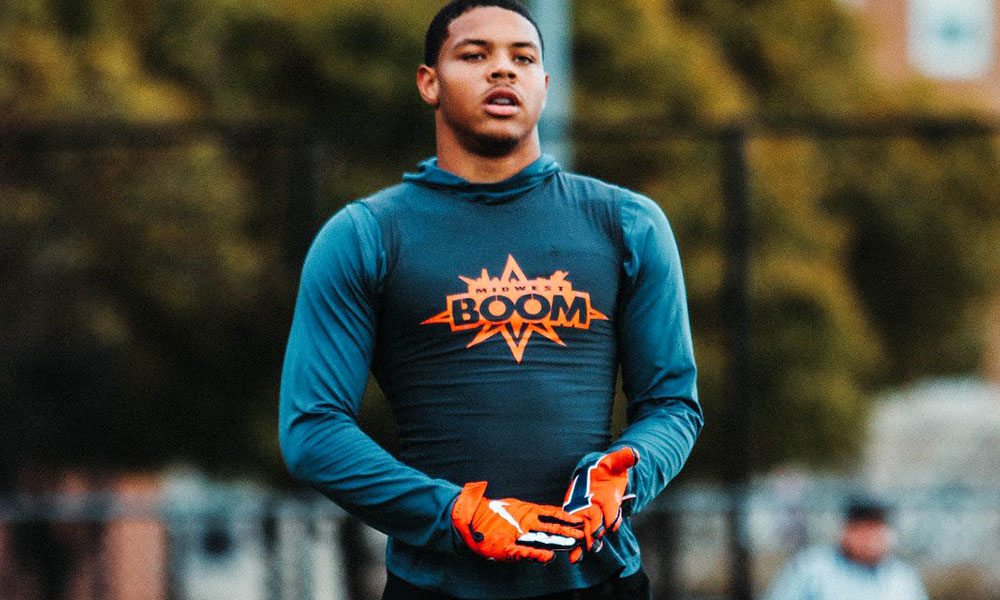 Kaleb Brown made a one-day unofficial visit to Ohio State and saw no reason to wait before committing. (Kaleb Brown/Twitter)

That kicked into overdrive during a one-day unofficial visit with the Buckeyes on Monday. That trip was the culmination of a months-long slow burn between the Chicago 4-star receiver and Buckeyes receivers coach Brian Hartline. That led to a quick commitment.

“I click with [Brian Hartline] as a person,” Brown told Lettermen Row ahead of the visit. “It’s always good conversations. My recruitment has been low-key since it started if you ask me. The dead period only showed who is serious about my future and well being.”

Hartline and Ohio State were very serious about Kaleb Brown and now he’s shown how serious he is about the Buckeyes.

Lettermen Row is breaking down Brown’s decision and what his recruitment means for Ohio State, the Big Ten and the entire 2022 recruiting class.

There are a number of very good receivers at Ohio State already but there isn’t really anyone that fits the same mold as Kaleb Brown. He’s a true slot receiver in the mold of Curtis Samuel. He’s a 5-foot-11, 180-pound receiver who played a lot of tailback early in his career. There’s a comparison to be made to Mookie Cooper and the way he was intended to be used in the Ohio State offense but Brown is a more natural pass catcher and his 10.8 speed in the 100-meter dash means he’s got the ability to hit homeruns on jet sweeps and other end-around type of players designed to get him the ball in space. Brown has the ability to play on the outside and that’s what separates him from Cooper and others who the Buckeyes have tried to fit into that role since Samuel’s departure.

Brown isn’t going to run away from everyone, but his combination of wiggle and straight-line speed make him a dangerous weapon for a versatile offense. He runs with power when he has the ball and can make guys miss in the open field.

Kaleb Brown is also someone who could help Ohio State in the kick return game and that could help him get on the field earlier in his career.

It’s almost become a running joke around Ohio State recruiting circles but yes, Kaleb Brown is just another big-time recruiting win for Brian Hartline. The Buckeyes have become the school for receivers and Hartline’s presence is a big reason for that. He’s no longer recruiting but choosing his guys and Brown was a player that intrigued Ohio State from the start because of his versatility.

Early in his recruitment, Michigan and Notre Dame were each thought to be the real contenders for the country’s No. 6-ranked receiver but as mentioned, the relationship with Ohio State was built slowly and in a very low-key manner, which is how Brown handles his business. The second-ranked prospect in Illinois, Brown is the third receiver to commit to Ohio State in the Class of 2022.

The question is now whether or not Hartline and Ohio State chase another. The depth chart in Columbus looks intimidating but with lofty expectations on nearly every player, the odds of early NFL departures are good and turnover can happen quickly. There will be a key visit coming from Southlake (Texas) Carroll receiver Landon Samson this upcoming weekend and a planned official visit for Kojo Antwi, but Brown’s decision will put the Ohio State staff into assessment mode.

It’s my expectation that the Buckeyes would take one more receiver in 2022 at this point. Who that will be gets more interesting from here. As stated, Hartline is choosing, not recruiting at this point.

Ohio State regained the No. 1-ranked in the national composite rankings on Monday afternoon thanks to a big-time decommitment from Georgia. The addition of Kaleb Brown, verbal No. 13 for the Buckeyes, stretches that lead a bit.

In the Big Ten, Ohio State yet again increased what has become an insurmountable lead over Penn State, Rutgers and Michigan for the league’s top class as it heads toward a third consecutive conference recruiting crown and No. 11 in the past 12 cycles. Brown gives the Buckeyes six of the country’s Top 65 players in the 2022 class.