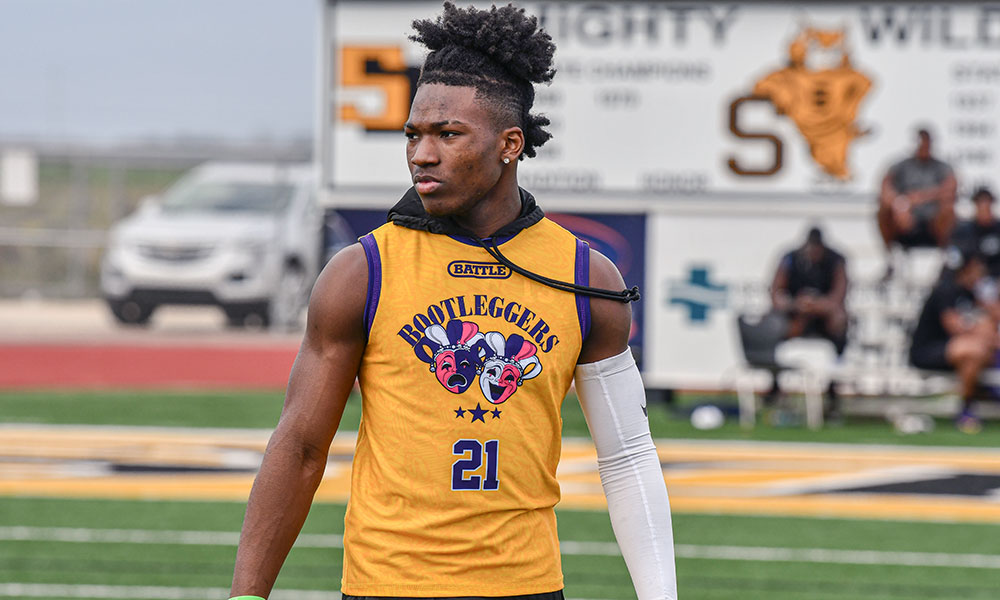 COLUMBUS — Ohio State has its first 2022 football commitment: Jyaire Brown is in the fold.

Brown, a 4-star cornerback from Warren Easton (New Orleans) High School, made his decision just five days after receiving a scholarship offer from the Buckeyes, presumably ending his recruitment before it ever really began. It’s very early in his high school career to make that kind of decision, but the Cincinnati native knew from the moment he landed the Ohio State opportunity that was where his heart was leading him.

Lettermen Row is breaking down Brown’s decision and what it means for Ohio State, the Big Ten and the national recruiting landscape.

The thing about recruiting high school sophomores and accepting commitments from them is that coaches need to be very sure about what they’re seeing in order to make a true evaluation. With the 6-foot-1, 170-pound Brown, the task was made easier for Kerry Coombs and the Buckeyes because there’s a lot of game film available on Brown.

“Jyaire was a starter and played in all 14 games last year,” Warren Easton (New Orleans) coach Jerry Phillips told Lettermen Row. “We play the best players, no matter what grade they are in. However, it is rare for us [to rely so heavily on a sophomore], especially at that position. Jyaire eventually beat out a senior for the position.”

Warren Easton has played in back-to-back state title games in Louisiana, so the program is one with a winning culture and Brown has fit right into that.

“He has that cornerback mentality — he wants to make all the plays and tell you about it,” Phillips said. “He’s explosive with good speed, and also plays varsity basketball and runs track. We haven’t put him on clock, so we don’t know his exact speed. But he has good football speed right now.

“He plays the position physical, so he needs to keep improving in the weight room. If he continues working on his technique, he’ll be one of the best.”

That’s a similar assessment given to Lettermen Row from Rivals.com analyst Sam Spiegelman, who has scouted Louisiana for years and is one of that area’s most trusted talent evaluators. He’s a fan of Jyaire Brown.

“He has the ability to play press-man or off-ball coverage, and while he is an outside cornerback by trade, Brown could certainly see snaps inside at the nickel position when he arrives at Ohio State,” Spiegelman told Lettermen Row. “Where Brown really thrives are his instincts, short reaction time and uncanny short-area quickness. He has incredible make-up speed and is especially fast at diagnosing routes and jumping them.”

As usual, the goal is to provide a recent Buckeyes player comparison. The name I’ve heard from people around the Ohio State program is Marshon Lattimore. If Brown can bring that kind of explosive athletic ability to the Buckeyes, then the first commitment of the 2022 recruiting class is going to be one the program will be very happy about for years to come.

The addition of Brown is the first Buckeyes verbal for the Class of 2022. That means in at least some small way Ohio State is now open for business in that cycle.

That means the clock is officially started on a handful of in-state players who most in the recruiting world expect to eventually join Jyaire Brown. For players like Gabe Powers, Tegra Tshabola and C.J. Hicks, there’s been no hurry to join the fray to this point. But as the Buckeyes now begin to evaluate and offer players in their class in earnest, it may make sense to help Brown — who is going to be an excited recruiter for Ohio State but isn’t able to do much when it comes to peer-to-peer recruiting on campus.

Jyaire Brown is the first Buckeyes commitment from Louisiana since 2004 and just the third player from the Bayou to select Ohio State in the last fifty years. He had 19 offers at the time of his decision, including scholarships from Alabama, Georgia, Florida State, LSU, Oklahoma, Texas and others.

The Buckeyes brand is bigger than ever and gaining steam in parts of the country where it never has before.

As the Buckeyes first 2022 commitment, Jyaire Brown doesn’t do a whole lot for Ohio State on the national rankings — because, well, there aren’t yet any national rankings for that class. The Buckeyes are on the board, though, and that means they’re now in competition with Michigan (two commits) and Iowa (one) in 2022. LSU leads the way nationally with four very early verbals, with three of those players defensive backs.