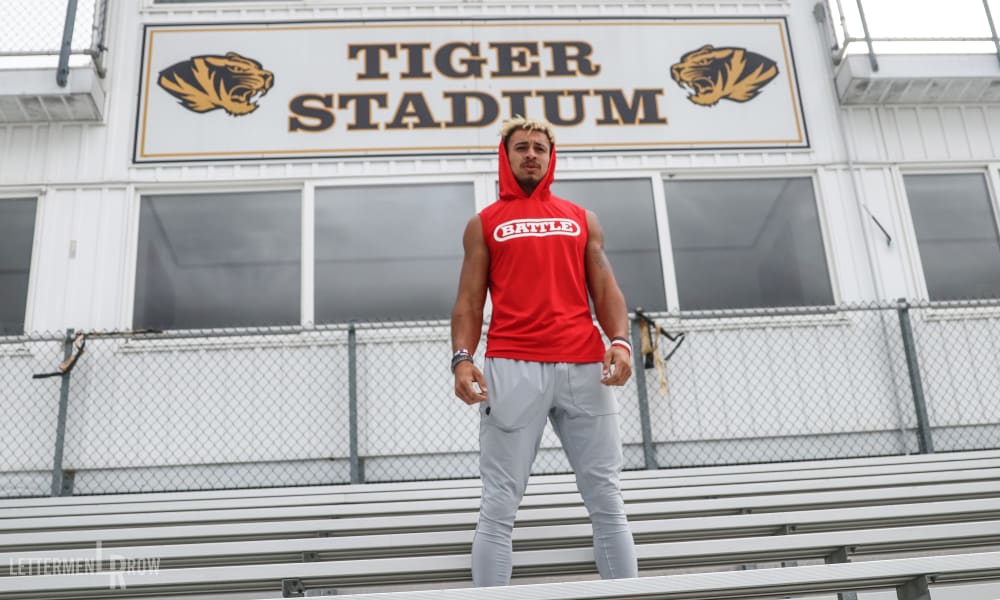 Ohio State commit Julian Fleming is proud of where he comes from in small-town Pennsylvania. (Birm/Lettermen Row)

CATAWISSA, Pa. —Back behind the stadium where a field hockey game is winding down before soccer takes over the turf, Julian Fleming eases his car down a steep, gravel road.

The long grass is soaked. The tire he wanted to flip was anchored down by water and he warned to look out for snakes. He also wasn’t sure if the reporter tagging along with him was even going to be capable of spinning the kind of spirals that a five-star wide receiver might want to show what he can do.

But none of that really mattered to Fleming as he picked through a dozen different pair of gloves in his trunk and slipped on a brand-new pair of size-13 Under Armour cleats.

“Man, I just miss football so much,” the nation’s top-ranked wide receiver said. “I can’t wait to get going.”

First, that means his senior season at Southern Columbia in his hometown in rural Pennsylvania near the Susquehanna River. The signs welcoming visitors to town proudly proclaim it Tiger Territory, and Fleming is aiming for a third state championship and looking to put all of the district receiving records he already owns completely out of reach for years to come.

But Fleming is also starting to peek ahead just a little bit at what will follow that when he graduates early to enroll at Ohio State, the place where he silently committed in March and tried to keep that decision secret until announcing it publicly on Friday.

A small-town kid with big-time dreams and the potential to match it, Fleming is obviously aware of where football can take him as starts planning his future with the Buckeyes.

But even while squeezing in time to snag a couple extra passes on a gloomy Tuesday afternoon in May and professing his love for the game, it quickly becomes clear that football is only a small part of what makes Julian Fleming tick. 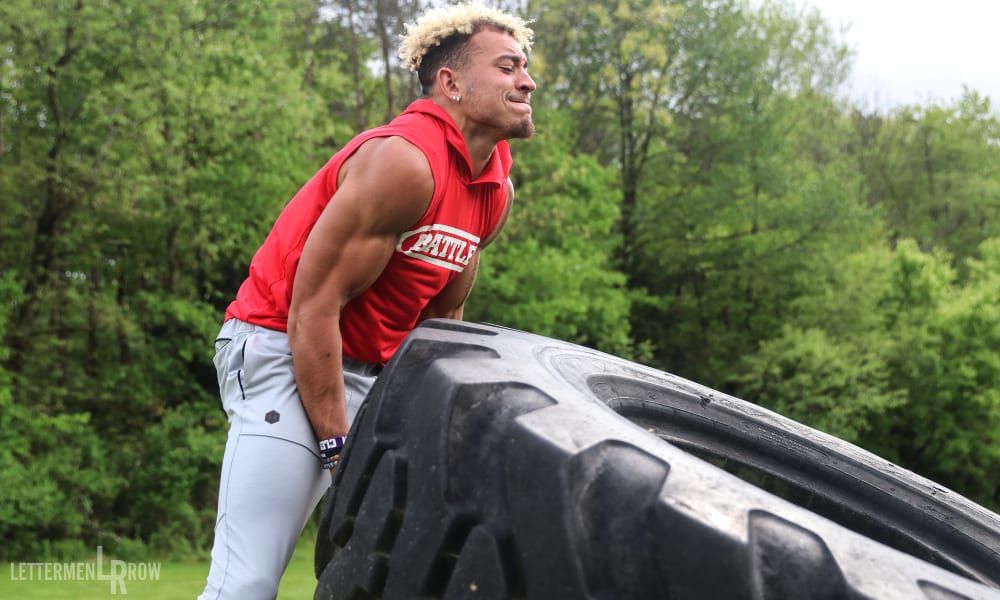 Betsy Fleming sits at a table in the kitchen, laughs and then calls out to her younger child in the living room.

The answer comes quickly from the rambunctious six-year-old girl and brings another round of wide smiles.

Eventually Julian Fleming wins approval for his skills as a big brother, gets a big hug and eventually heads outside to watch the show as his sister pedals up and down the street in front of their townhome.

Initially, he admits there was some hesitation to embrace that role after years as an only child. But that faded quickly, and that relationship became just as critical to Fleming’s maturation process as the one with his mother and grandfather.

“Like my friends and family, they mean just about everything to me,” Julian said. “They keep me being me. My family, that’s the one thing that’s been there my whole life. They’re my everything, and they really shaped me into who I am today. I can’t thank them enough.

“I love my little sister, she’s a little badass. And my mom and I, we’ve got a real close relationship. We argue a little bit sometimes because we’re both stubborn. She passed her personality down.”

Both are engaging, open and welcoming to strangers. Both like to crack jokes at the expense of the other. And both make no secret about the value of a strong community like the one around Southern Columbia thanks to the support that got them through everything from injuries to an overwhelming recruiting process that could have easily ruined Fleming’s humble approach.

“I think there is an incredible amount of exposure for these kids when the offers come at such a young age,” Betsy Fleming said. “There’s a lot of support, but there can also be a lot of targeting and maybe jealousy from other schools. I tried my best to let him know that he’s a student first, he’s a brother first, he’s a son first — he’s all of those things before any of that stuff on the football field.” 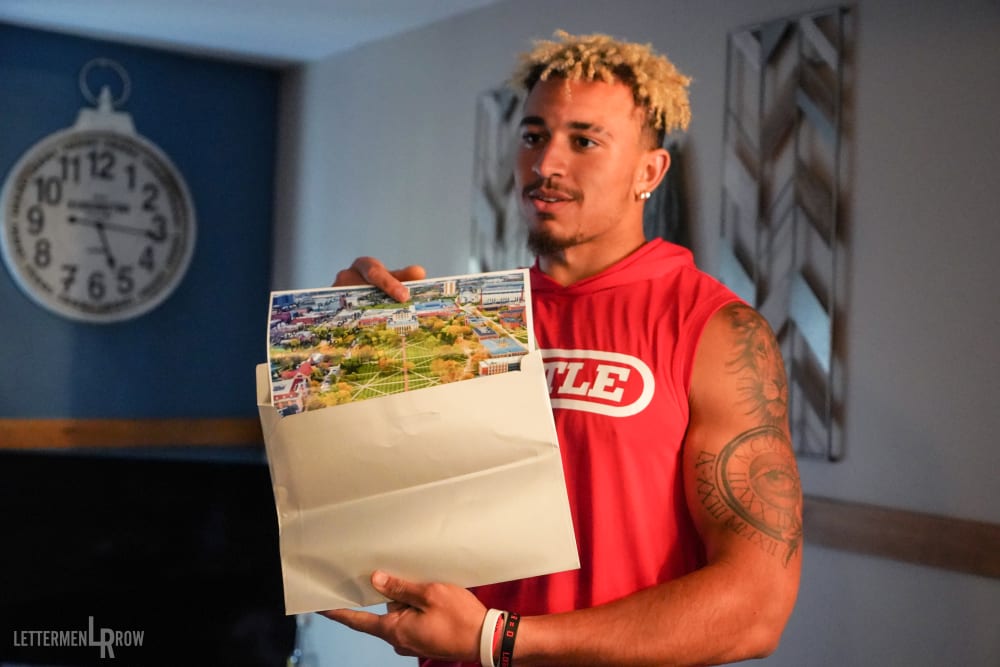 Ohio State commit Julian Fleming was pursued by every major program in the country. (Birm/Lettermen Row)

The main hangout is about a mile down the road in the parking lot of a Sheetz gas station.

If that’s not the spot, Julian Fleming and his friends can be found in a nearby park with a basketball hoop and tennis court, music blaring from car speakers with the doors open wide.

“That’s all I got, that’s the only thing going on,” Fleming said. “I mean, sometimes the cops come by and tell us that we can’t be too loud. But for the most part, they’ll just let us sit there, and it’s cool to be around a bunch of different people.

“I mean, it’s fun growing up here. It’s a real safe place, like our door is never locked.”

Fleming makes it clear that he’s ready for something new, though, and that’s one key reason why Penn State came up short for his services despite being just a little over an hour away from his front door.

There are perks to being a celebrity in a small town, including a couple speeding tickets that may have turned into warnings for Fleming over the years. (“I still got one,” Fleming joked.)

But there is also pressure. Even just walking around the track during the field-hockey game, a handful of young soccer players all whisper his name and follow his every step. A handful of spectators come up asking if he’s going to commit to the Nittany Lions.

“Honestly, I don’t get treated too differently,” Fleming said. “Yeah, some younger kids will come up to me all the time to get a high-five or whatever, but at the same time, I have to set an example for them. If a kid sees me doing something stupid or messing around in the hallway, they’re going to want to mess around in the hallway. You just have to hold yourself to a higher standard, because if you slip up a couple times, that could end everything. I think about everything I do before I do it.

“I think this place shaped who I am. Maybe if I was from someplace else, I would definitely be different, probably a little more cocky. I mean, I’m a real confident person, don’t get me wrong. Some people think it’s cockiness, but I’m just confident. And I think if I had been from somewhere else, it would be different.”

“Youth football,” the legendary Southern Columbia coach said. “The only thing I knew was when I saw him play at that level and then the junior-high level, I’m looking at him like he’s just different. He’s at a different level than everybody else on the field, and I would just keep thinking: I hope that translates all the way through.”

Roth got his wish, and just like the community, the hard-working, team-first mentality of his program has also played a prominent role in developing Fleming into the player he is now.

The freaky speed? The strong hands? The 6-foot-2, 215-pound frame? Sure, those gifts were always there with Julian Fleming.

But it’s the selfless attitude, the willingness to block and the understanding of his role in the big picture that have helped keep driving the Tigers forward as Fleming’s national profile soared.

“A lot of the stuff that you see with these elite receivers, he’s just not into that stuff,” Roth said. “To me, that’s being very mature and also just being a different person. It’s been really impressive to see him go through this process since the time he was a freshman.

“I remember getting called not long after his freshman year by Michigan, the first school that offered him. At that time I’m thinking: How can they think he’s a Division I player at this point? Yeah, he had a good year, he stood out and did a lot of great things, but I just looked at the whole aspect of it in terms of his maturity, his mindset and being able to handle playing Division I football. You’re thinking about it with a kid who is a freshman. Then each year you would say, ‘Well, he’s about as good as it gets.’ And then the next year he seems to do something to take it to the next level. As impressive as all that is, it’s just the way he’s handled it mentally and the way he’s matured through it all.”

There is still more work to be done, of course.

Fleming is well aware that he’ll be facing far, far stiffer competition in the Big Ten than what he dominates in his district of Pennsylvania. When it comes to the technical aspect of his position, the coaching he’s going to get will obviously be different when it’s done by a former NFL standout like Brian Hartline. And the spotlight in the Horseshoe is obviously going to be dramatically brighter than old Tiger Stadium.

But all of that helped forge Fleming into the nation’s most coveted wide receiver, and he makes it clear he won’t forget where he comes from when he eventually moves on to the next level. And Southern Columbia obviously isn’t ever going to forget about him.

“Even when we’ve played against teams with other Division I kids, it just seems like he can rise up and do things at a level that is just remarkable,” Roth said. “I haven’t had a lot of players like that.

“He’s a once-in-a-career athlete for us.”

Deep down, it turns out Julian Fleming is actually a pretty good babysitter, too.