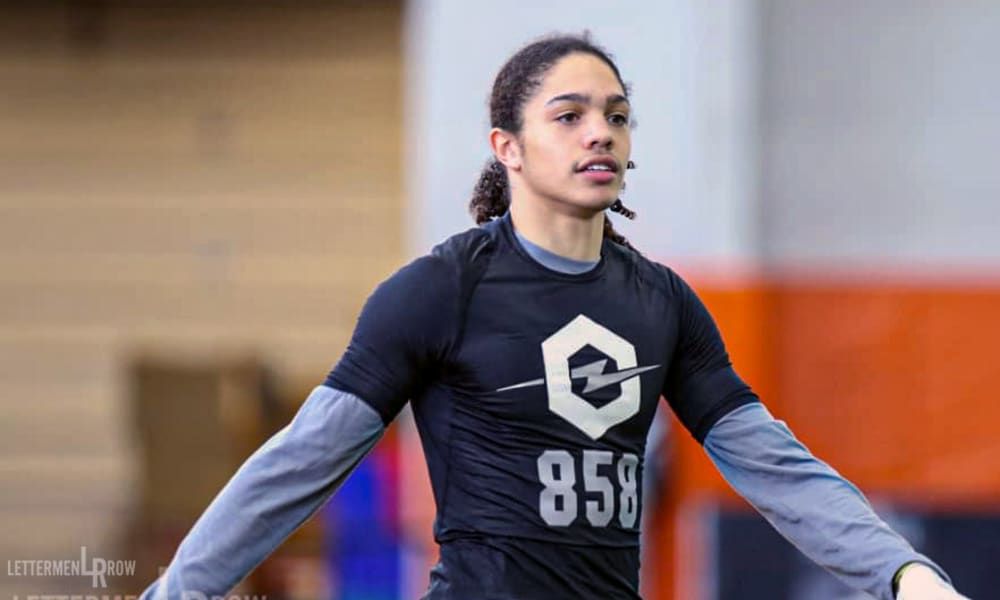 Jayden Ballard was offered by Ohio State as a freshman and has been committed for over a year. (Birm/Lettermen Row)

COLUMBUS — Jayden Ballard is not easy to cover.

And he’s pretty difficult to guard on the football field, too.

Committed to Ohio State for a year now, Ballard was offered by the Buckeyes when he was a freshman, and that alone makes him an anomaly among Ohio prep prospects. But it’s the way that he has always avoided the media like he avoids defensive backs which makes him even more unique in a day and age that celebrates self-promotion. It’s not a matter of disrespect or anything negative, really, he’s just a kid that doesn’t care about the hype.

Ballard, a dynamic three-sport star who lights up highlight tapes as a receiver, a basketball player and on the track, gets his attention the old fashioned way. Sure, he has a Twitter account, but he largely stays out of the social media spotlight. That’s a rare trait for a young athlete as dominant and explosive as he is.

“He’s been raised right,” Nate Moore, Ballard’s coach at Massillon Washington, told Lettermen Row. “He comes from a tight family, plus we’re a team-first program. I don’t want to take any credit for that, but it’s probably got something to do with it.” 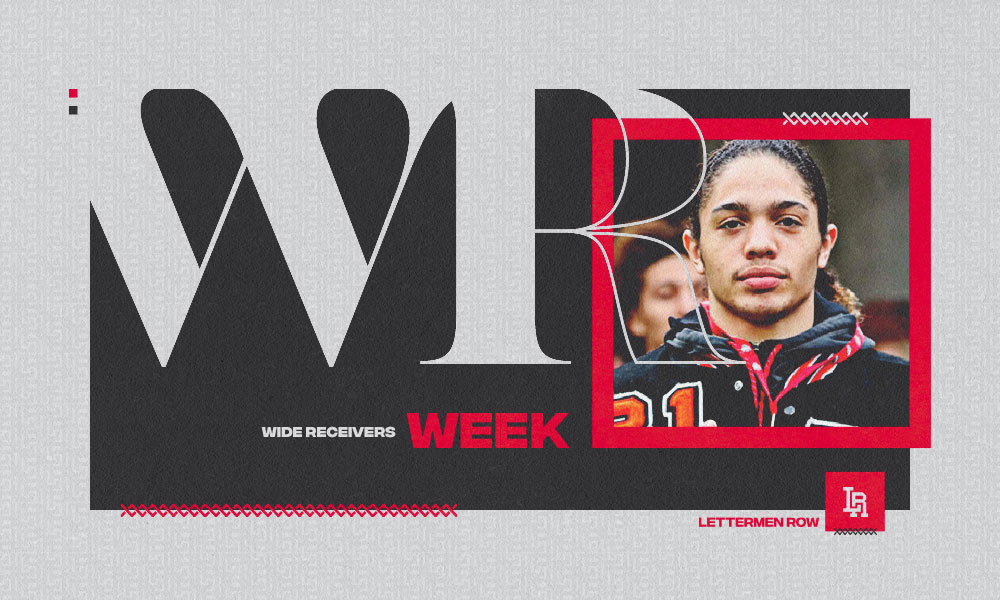 On the field, Jayden Ballard flashes his talent as easily as he does his smile. Maybe avoiding the media has made that easier to do. After all, not many recruits get to enjoy being a regular teenager the way he does. Moore has seen no pretentiousness from him and no big-timing his teammates. He’s a high school football player like everyone he suits up with.

“Jayden is just a really nice kid,” Moore said. “Off the field, he’s just a normal kid who likes to hang out with his friends and teammates. He’s not full of himself. He does not see himself as anything different than anyone else. He’s always the guy at the back of the line dancing and joking in warmups when the music is playing.

“He doesn’t take himself too seriously.”

But there is a difference in Jayden Ballard. It becomes noticeable when the whistle blows.

“When it’s time for his rep?” Moore said. “He’s always ready. Jayden is a competitor. He becomes different than the other guys when the ball is in the air. He’s got the skillset, man. His ball skills are elite. He’s listed as a 10.9 in the 100-meter dash, but that was his sophomore year, he’d probably run a 10.6 now if we’d had spring sports this year. He’s 6-foot-2. He’s added 10-15 pounds of muscle now and it looks really good on him.

“All the talent is there. It all comes down to how hard is he willing to work.”

That answer seems obvious now, but that wasn’t always the case. Despite already proving his supreme talents, just over a year ago there were concerns that Ballard may not be mature enough for the responsibilities that come with being an Ohio State commitment. That concern was amplified following a visit to campus for the spring game last year as Ballard and the Buckeyes staff didn’t click as expected.

“For some kids, it takes a little while to warm up. Everybody’s different, and that’s OK. We all have to reach a point where we need to interact professionally with people. But you’ve got to get there.” 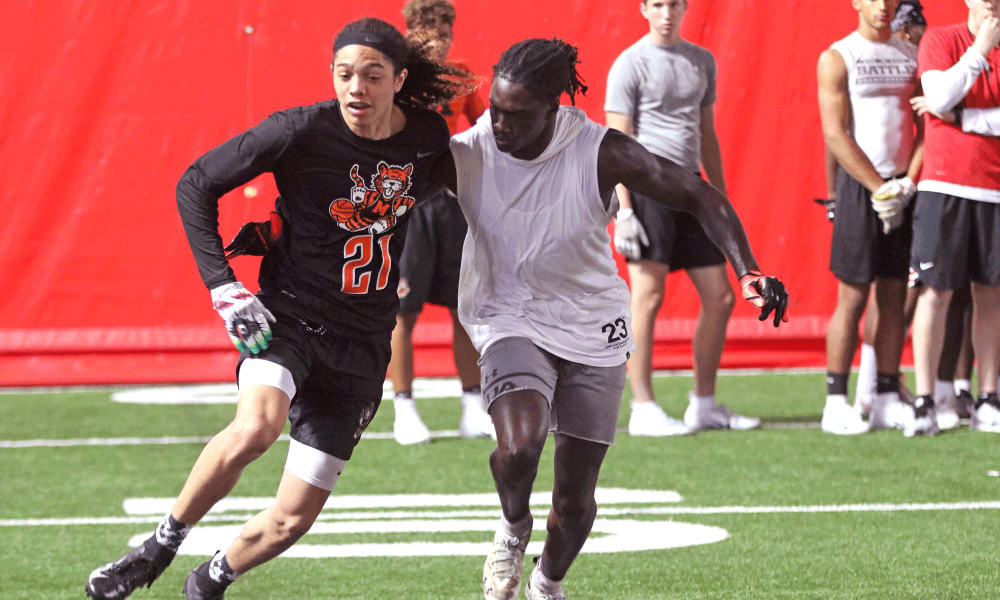 Jayden Ballard turned heads at an Ohio State recruiting camp in the summer of 2018. (Birm/Lettermen Row)

Ballard got there as quickly as he gets to a top speed on a deep route. Just three months later, he had proven to himself and to Brian Hartline that he was ready for the next step and earned his spot in the Buckeyes 2021 class.

Earlier this week, Ballard made a sizable jump when 247Sports.com updated its national recruiting rankings. He’s now listed as the country’s No. 45 overall prospect and No. 5-ranked receiver. The Buckeyes commit may not make a lot of noise, but his talent is deafening and has clearly earned him the national recognition.

Maybe he’d have been a bigger national name if he’d waited to commit, or if he was into the self-promoting, diva-esque behavior that usually infects young wideouts. That doesn’t play well at Massillon and won’t play well in Hartline’s receiver room either. The cliché is well-worn, but it’s accurate: Work in silence.

“I’m sure Jayden cares somewhat about the rankings,” Moore said. “But if I was him? I’d be thanking the people that didn’t take notice. His film speaks for itself. His measurables do too. I don’t think that there’s a whole better motivation out there than when people think you’re not as good as you know you are.”

In order to find out how good Ballard is, and in order for him thrive at Ohio State, he’s going to need to be more assertive.  He’s going to be pushed outside of his comfort zone and will need to be comfortable with contact, on and off the field.

“If he’s gonna play at Ohio State, that’s going to have to happen. He needs to start working on that right now. I want to see him catch a short route, turn up field and put a shoulder down into a cornerback. That’s the next step for Jayden.”

Maybe the first time that happens at Ohio Stadium and results in a Buckeyes touchdown, Jayden Ballard will be ready to talk about it. Until then, he’s perfectly content letting his game do his talking for him.

Continue Reading
You may also like...
Related Topics:Featured, jayden ballard